Startup Insider is a series of articles with the goal of helping aspiring founders and entrepreneurs understand the ins and outs of starting a startup. I recently got the chance to interview multiple startup companies that have gone through the Dreamit Ventures Accelerator program. You can sign up to stay up to date with this series here.

The second company I got a chance to interview through this feature series collaboration with Dreamit Ventures was SnipSnap. SnipSnap is a startup that allows anyone to convert a printed coupon into a digital, mobile format, which they can easily search and retrieve on their smartphone. SnipSnap was started by Ted Mann who wanted to solve his own problem of being a terrible couponer. 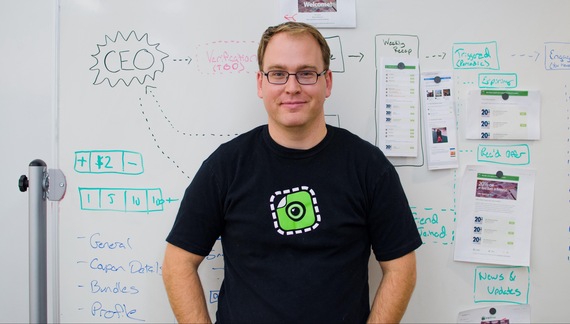 Q: What was the inspiration behind SnipSnap?

Ted: The inspiration for SnipSnap was driven by a problem that I had. I was a terrible couponer and I would always get yelled at by my wife for always forgetting coupons. So I wanted to be more responsible so I started using my phone to photograph coupons that I got in my mail and newspaper. I was just doing that for 6 months and it worked really well and I saw other people in the store doing the same thing as me. So I thought 'what if we could build an app around this?'

The original app was built in 2012 but there's so much more than just taking a picture of the coupons now. We actually do image recognition of the coupons, so we use different technologies to scan and parse out the face value of every value of every coupon, the expiration date and the barcode.

Q: What were some early challenges that you faced?

Ted: The biggest challenge was just validating whether or not it was going to work. Before you go and quit your job and invest thousands of dollars, if not millions of dollars to get it off the ground, you want to be pretty confident so I was just brute forcing it at the start, taking photos of coupons with my camera.

It was a great way to validate to the stores that it was an interesting idea and to make the stores understand that mobile couponing was possible. We went through different challenges from every stage of the company from hiring to fundraising to business development but this was the main one.

Q: When did you decide to quit your job and pursue SnipSnap full time?

Ted: At the point that I quit my job, I had built a prototype which was a really crude mockup and I had been doing this for 6-7 months, just couponing away. A big factor as well was this company called RetailMeNot that I had spent a lot of time reading about which was based on crowdsourcing online promo codes. I spent a lot of time learning how they worked and found out how lucrative it could be. Then when I saw people doing affiliate marketing online and bringing that to retailers, I saw that there was going to be a change in the way retailers coupon, and I saw that we could be the first to market.

Getting into Dreamit was a very important moment and was one of the big factors for me to quit my job and jump head first into the entrepreneurial waters. I had a normal and stable job but I was feeling a little angsty to do something bigger so I applied at the urging of one of my friends. I spent a few weeknights and weekends working on the prototype app which I showed to a couple of partners at Dreamit during my interview and got the call. I think that was definitely one of the happiest and the most terrifying moments in my life.

It got very real real quick because the first thing they asked when they extended the invite was, 'when are you going to quit your job?' No pressure.

Q: What did you gain out of your Dreamit experience?

Ted: The best thing I got out of Dreamit was the co-founder community. In our class, we had 14 startups that graduated alongside me, and I remain in close contact with all the founders of these companies. It remains very collegial and it's like you're graduating from your high school class.

These are the ones who made the most out of the resources, the fundraising help, the accounting advice, the expertise of all the dreamit partners and the mentors that generously lent their time. If I could do it all over again, I would ask the lawyers for 10 other documents that I would be needing in the future, I would lean on the other Dreamit founders and ask for more help as well.

Q: What are the biggest lessons you've learned?

Ted: Some of the biggest lessons I learned was when you have an inflection point and you see significant traction, make sure you are able to raise capital because those moments when you hit the hockey stick curve don't happen everyday; you really need to maximize those moments, whether it's through a PR standpoint, fundraising or what not.

Q: How has SnipSnap grown since you started?

Ted: Since SnipSnap launched after Dreamit, we've gotten around 5 million users on iPhone and Android, and we've saved about 250M coupons. We continue to be a coupon app at heart but we've since launched some features and functionality that are pretty exciting like Scout which is like a deal concierge so if you go to the app, you might search for a coupon and not find one but you can call up a scout to help you find a deal, whether it's coupons, rebates or price matching. Our users are saving around 40% on average. I've saved for every purchase I made this holiday.

Our team has matured quite a bit. We were acquired about a year ago by a Canadian venture called Slyce. We're now part of a much bigger and more ambitious startup but we still have the same great team in Philadelphia and our business has reached profitability. 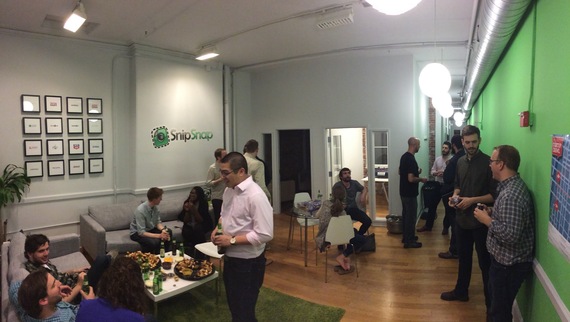 The SnipSnap team continues to grow

Q: What was your most memorable experience?

Ted: I think for me the most memorable 24 hours was right about the time we were going to launch; we were based in Philadelphia and this was during the Philly Tech Week, and we were planning to show off the app at all these events. However the app hadn't been approved by Apple yet and we got a message from Apple that the app was going through extended review. We didn't know what that meant so we competed in an event called mobile Monday, and at the mobile Monday demo competition, we were competing with five other startups but we couldn't tell anybody to download it because it wasn't up yet.

Fortunately it demoed well and we were the audience favorite by a large margin and immediately following that during the reception, everyone was high-fiving and I went up to another mobile engineer. I told him that Apple just sent us this message and asked him, what does it mean? Then this friend of mine tells me that our app probably won't be approved.

So I freaked out. I got home that night and my wife was very worried because I went home late that night and she asked if the app got approved, and I told her that the app hadn't gotten approved yet and that our app may never get approved. That moment she asked me to begin looking for a job.

So that night after winning the event, I was at the Comcast job site looking for a job and the day after the app gets approved and one week later, it gets featured on the front page of the Apple store so that was pretty wild. We sort of went from the high high to the low low to the high high but it was very emblematic of the startup experience.