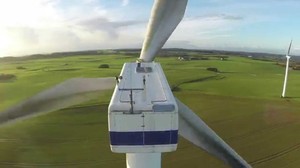 Despite the hoopla generated by Amazon's announcement that it would like to deliver parcels by drone at some point, the most successful initial application of the technology has been much more humdrum.

I have written a few times recently about the growing use of drones to provide monitoring services, whether it's to help navigate the oceans, monitor glaciers or even entire ecosystems. Indeed, a recent project in the US has been using drones to track the gas leakage from drone sites.

A similar application has been used by utility companies to check on the functioning of their network. The Electric Power Research Institute recently held a workshop, for instance, to help utilities choose drones for the maintenance of power lines.

Utility companies are believed to spend millions each year inspecting power lines, with many of them in very hard to reach areas. As such, it's a natural place for using drones to do the work instead.

It's an approach that Portuguese start-up Pro-Drone are applying to the maintenance of wind turbines. Rather than have inspections carried out by dangling highly-qualified engineers many meters in the air, they offer an automated solution to do the job without putting anyone in harms way.

Their drones come complete with highly tuned flight algorithms that allow the drones to fly at the precise point to effectively monitor each turbine. They're also equipped with sensors to capture the data required, and then software that can help to manage the data that is captured.

The renewable energy market is rapidly expanding, but operating costs remain a challenge for the industry. More efficient monitoring and maintenance could therefore be a nice way for the sector to remain competitive.

"Our proprietary control, featuring space awareness sensors, enables the UAV to fly in relation to the blade making precise sweeps and collecting the data automatically. This makes the process much more robust, repeatable and safe when compared to other UAV inspections and up to 6 times more economical than traditional rope access inspections," founder Andre Moura told me recently at the INNOVEIT conference.

The technology allows companies to conduct a full inspection of a wind turbine in under an hour, with Pro-Drone working to streamline this down to 30 minutes eventually. This has the clear advantage of ensuring the turbines don't need to be out of action for long.

The data from the drone is then fed into a cloud-based platform where the data and images from the inspections are provided for inspectors to analyze the results easily and intuitively. The eventual aim is for the platform to automatically diagnose potential and real-time problems.

"We are at a very exciting stage of our development with several pilots across many countries planned in the following months, with the first one starting next week with EDP Renewables," Moura says.

The company are passionate about renewable energy, and hope that their product will go some way to help wind energy gain price parity with non-renewable sources.

Check out the video below to see the drone in action.