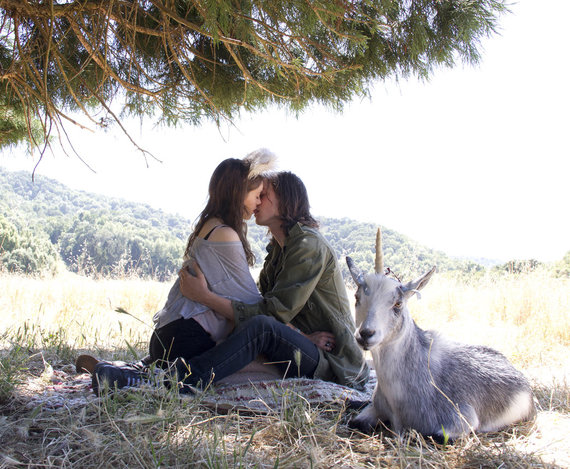 Opening with the usual hoopla, the STARZ Denver Film Festival 37 is well underway. Red carpet screenings at The Buell and their requisite parties ushered in some of the big films, while the 200+ films being screened over the 12-day fete continue to intrigue, provoke, terrify and delight moviegoers.
My chaos theory and chaotic reality always clash as I approach the twelve day cinematic binge-fest. Poring over the film guide, I circle, highlight and mark out my must see list. Then real life happens and I show up when I can and roll into the next available screening. My free-form-festing brings surprise and serendipity, leaving vapor trails that connect themes in mysterious ways.

Opening night brought a pretty but far too predictable 5 to 7, directed by Victor Levin. Anton Yelchin plays an aspiring (and unpublished) writer, living in a nice Manhattan flat I kept wondering how he paid for, wraps the lovely Berenice Marlohe in a rendezvous I never quite believed.

The Big Night fared much better, offering The Imitation Game. Benedict Cumberbatch (TV's Sherlock) leads a spot on cast in this solid biopic about a British mathematician, Alan Turing, who broke the German's Enigma code, diminishing Nazi power in World War II. I loved how the story marched forward with strength and vitality while never allowing itself to get too showy. Cumberbatch pulled off a very graceful performance full of nuance but with the seams tucked in. Nice to see a leading man lead the story without feeling the need to steal the show.

Leah Meyerhoff's I Believe in Unicorns is a feature film debut, told by an old-soul storyteller. Her painterly eye and 16mm format sweep us into a mythical tale that lifts beyond the coming of age story, stirring up the memory of first love. The characters are young and perfect; hearts true, logic flawed, but they press on in heroic longing, even as the ugly reveals. Haunting, and beautiful, and as painful as love can be, "I Believe in Unicorns" left me musing on the power of our personal magic, wondering why we choose to spend it where we do.

Slipping into an afternoon screening of the documentary 3 Still Standing was a dream-stand-still of another time. San Francisco in the early 80s was the Mecca of stand-up comedy. Sure, New York and LA had their stars and bars and comedy clubs, launching careers of our comedy pearls, but the oyster was the City by the Bay. In 3 Still Standing directors Robert Campos and Donna LoCicero follow three comics from back in the day and the realities of what happens when your dreams don't come true. Or do they? Larry Bubbles Brown, Will Durst and Johnny Steele were some of the rising stars of the SF stand-up scene, but unlike their friends and peers, Dana Carvey, Paula Poundstone and Robin Williams (each of whom appear in the film), their arcs were not stratospheric. There is something lonely and tragic in the film. The characters are not to be pitied; each man takes responsibility for his choices, but the whims of fate can be cruel and when the work dries up the dream often goes with it. The beauty in this yarn lives in the integrity of the three comics who continue to pursue and perfect an art form in a world that holds no place for it. And stand-up is hard. It takes craft and guts, high intelligence and a musician's ear to find and formulate the funny. Will Durst, Johnny Steele and Larry Bubbles Brown stand for something, reminding us that the dream is not always connected to fame and fulfillment; sometimes the dream is in the doing.

Now on to the shorts, the videos and the Brazilians!