I'm always amazed that so many people bitch about not earning enough money to make ends meet or wonder where the money went or exclaim how far their stock portfolio has plummeted. However, many of these same folks disregard money that is just sitting and waiting for them to collect. 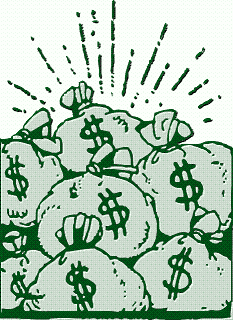 I'm referring to funds that, for whatever reason, a company you worked for or an insurance company that owes you dividends -- among many such possibilities -- cannot find you. Sometimes these excuses are absurd as in the case of a well-known TV writer I know who Universal Studios lost track of, whereas they easily could have attempted to find her by calling the Writers Guild of America.

In these instances the money is turned over to the government and in most states held for eternity -- it cannot be spent -- waiting and waiting for the money to be claimed by the rightful owner or legal beneficiary.

What is more outlandish is that the list includes many people I know (sadly my name is not on the list, as I'm pretty good at knowing who owes me what.) As a sort of game, from time to time I have input their names and as a courtesy have contacted many, many of these friends and acquaintances to let them know they have amounts up to four figures, though most are not so high.

However, quite a number are well into three figures and yet when I check back a year or two later, the monies are still unclaimed. Even though it's a simple task to do so. Just fill out a short form and send in a copy of your social security number, and in a number of months you'll get your money.

That last part I find amazing, because if the social security number is part of the proof, why doesn't the government just do a search through tax records of the last known address of said person, who most likely has filed in recent years unless they are dead. For the record, I have only made contact with the living.

One person, a close friend -- the one Universal Studios couldn't find -- kept saying "I'll do it," and then when I reminded her shot back, "I don't have the time," even as she continued to exclaim "I don't have any money." As a favor I even offered to fill out the form, having previously printed it out and given it to her, but because she put her Social Security Card in her safe deposit box, she couldn't be bothered to collect it to xerox it, even if it meant getting close to $150.

For those who are interested, here is the California web site and the one for New York State.

There's money out there, and in these horrible economic times, it's absurd to just let it collect dust. Frankly, I wish I had some lying there.