We have a signed federal law allowing Americans to access securities crowdfunding, as per the JOBS Act.  But as usual, Congress passed the baton to the SEC to pile on yet more regulations before crowdfunding becomes available to the general public.  And the SEC is sitting tight, dragging this thing on as long as possible.  Entrepreneurial liberty is being "sequestered".  But this is perhaps the best thing that ever happened to crowdfunding. 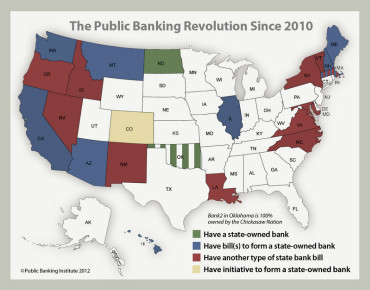 The crowdfunding component of the JOBS Act started as a really elegant, tiny change-set to the securities regulations, when it originally surfaced through Rep. McHenry as H.R. 2930.  But by the time it emerged as part of the JOBS Act, it was gummed up with a lot of additional provisions.  The final insult to injury however, reeks of crony capitalism.  The SEC granted accredited investor platforms relief from broker/dealer registration, yet the word on the street is that all general investor platforms will likely need to be registered as broker/dealers and be regulated by FINRA.  Thus there will be a sizable burden and economic disadvantage for all the players in general investor crowdfunding compared to sites like AngelList.  Mark Mohler nailed this in his Crowdfunding Law blog piece last year, "Investment Crowdfunding in the U.S. is Dead Before Arrival."

Now for the good news; forget the JOBS Act, the real economic and entrepreneurial leadership is happening at the state level.  There are two parallel trends, which together offer America the greatest economic promise of the last century.  And those trends are state-wide crowdfunding legalization and state-owned banks.  While these are currently happening as independent activities, I believe we will see a pattern emerge quickly whereby states adopt both of them concurrently.  In the crowdfunding camp, at least four U.S. states have recognized the value of forging ahead with their own state-wide crowdfunding legalization, something they are allowed to do provided the investors and businesses operate within their states.  And by the way, keeping the business economics local is a nice proposition from the perspective of a given state.  Georgia and Kansas have already signed off on crowdfunding legalization.  North Carolina and Washington have introduced proposals.  I expect the next legislative cycle to be a banner season for other states to submit proposals and sign their own into law.

State banks are the second of the two trends, one which many people are still unaware of.  Unless of course, you were at the Public Banking 2013 Conference with Matt Taibbi, Ellen Brown and Birgitta Jónsdóttir (Iceland's Parliamentarian who told the banksters to "shove it").  Thus far, only North Dakota has a state public bank, but there are at least 20 states considering some form of public banking legislation.  And by the way, North Dakota not only skirted a recession but gained jobs and maintained a continuous budget surplus since the 2008 crash.  That's what happens when banks have a charter to lend and facilitate healthy long-term economic activities (a generative economy) instead of creating self-reinforcing boom-and-bust cycles due to short-term lending expansion and contraction.

Why I think state-wide crowdfunding and banking go hand-in-hand, is that public banking creates a stable long-term-focused base of capital creation, decentralized into 50 competing states.  And then crowdfunding builds on that capital base, creating a velocity of investment money allocated in an even more decentralized and competitive fashion thereafter.

The issue we'll face for state-wide crowdfunding legalization is to update the thinking to accommodate crowdfunding and social networking dynamics.  I've reviewed all four states' legislation/proposals, and I see some "law of unintended consequences" in all of them, although they appear to be driven by good intents.  If you're a state considering crowdfunding legalization, please consider the following thoughts which are based on years of research in network economies, crowdfunding, social networks and new economic models.  First and foremost, consider allowing curation of deals.  In almost every possibly way that billions of people access the nearly infinite universe of the Internet, they use forms of curation as a filter.  Curation is the basis for the power of networks.  It's the way we'll find deals, and the way we'll ward off bad ones.  Having credible actors curating deals is a powerful and necessary filter.  Even promoting deals to the front-page of a platform's page is a volumetric form of curation.  Crowdfunding uses the power of networks, and thus is naturally highly curation-based.  Regulation of the past always tried to ostensibly prevent "pump and dump" schemes by cutting off third parties who try to connect investors with entrepreneurs.  But that's a solution that tries to solve darkness by preventing sunshine.  Curation is the heart and soul of the Internet.  It's how we shine the light on deals, and how we filter.

A second common issue is disallowing crowdfunding of investment funds, especially community investment vehicles.  I've been writing about this for some time; allowing the community to capitalize a fund, which then invests in local enterprises, recycling profits back into the fund.  This is the "perpetual motion machine" of capital formation.  Every one of the four states' proposals/laws prevents this generative economic model.  If you want to create a competitive environment in your state, I recommend not inserting "special case" language and letting this new model emerge.

And then there are some one-off items of concern.  For example, Georgia decided that "the issuer of the security shall be a for-profit business entity", especially ironic given the United Nations named 2012 the "Year of the Cooperative".  There are so many new organizational models emerging, along with existing ones which are not profit-focused.  American credit unions (non-profit member-owned banks) now have over $1 trillion of assets.  In Mexico, upwards of 80 percent of forests are community managed, as are more than 25 percent of forests globally.  Public-benefit corporations, community development financial institutions (CDFIs), community development corporations (CDCs), community land trusts (CLTs), and all kinds of organizations with a community purpose are springing up.  I think a state would do well to allow the use of crowdfunding for these entities.

But as a whole, state crowdfunding legislation looks far better positioned than at the federal level.  And states have the additional advantage of being able to more quickly tune their legislation, in the case that they see something better or want to be more competitive with other states.  As such, the most important observation I can offer to states, has less to do with the particulars of their legislation.  But rather, that there needs to be enough base money in the state to begin with, so that people have money to crowdfund.  Which is why I see such a powerful combination in state banks and state crowdfunding legalization.