A Conversation With Hot Water Music

Mike Ragogna: Your last official last album, The New What Next, was released in 2004, and your single "The Fire, The Steel, The Tread" came out last August. What else has been going on over the last few years with Hot Water Music?

Chris Wollard: Kind of a lot, I guess. We've been playing a lot of hwm shows for the last few years, and just having a blast. The States, canada, australia, new zealand, and a few tours in europe where we've been able to go to some new places like slovenia and hungary, finland, sweden. Always lots of Germany...haha. But, we've been trying to play together as much as possible. Everyone has also been busy with other bands as well, Jason in Senses Fail, George in Against Me, Chuck playing and recording a lot solo, and me with the Ship Thieves. So yeah, we've been busy, very lucky too!

Jason Black: What seems like tons at times and next to nothing at others. We've been planning on doing a new record for going on three years now, so there's been a lot of back and forth getting that was scheduled. The band live all over the country now, so the logistics of getting the beast in motion are pretty intense. We've been doing weekend shows here and there, some shows outside of the country... Mostly though, we've just been maintaining and working towards pretty much this moment here, where we're releasing a new record and getting tours together. Very stoked.

MR: Has anything significantly changed with the group's creative process?

CW: Well, over the years, I'm sure a lot of things have changed. And that's a good thing. We're always trying to learn how to get better at this, and when you are recording or writing with different people, you are always trying to pick up a thing or two in the process. sometimes it's a different approach at song arrangement, or maybe some playing techniques... maybe you are learning how to dial in an amp to find that mystery tone in your head, or it could be finding different ways to express yourself (or conceal yourself) in your lyrics. It's always an adventure, that's for sure, and that's the fun part. Getting better. But, I think the most important thing that we've learned is how to communicate better. or how to understand each other better. when the whole band is pouring their guts into a project, it's pretty easy to let things get really personal. So it's incredibly important to have faith in each other, and learn to communicate.

JB: Yes, and no. The writing process has definitely been affected by everyone's other musical projects as well as by the current geography of the band members. Chris and Chuck have been working on projects where they're the main songwriters, so they're bringing much more complete thoughts to the table now. That coupled with the band being bi-costal, we definitely don't hole up in the practice space five days a week like we used to...but that was DEFINITELY a good thing this time around. The new circumstances lent themselves to this being a very fluid, focused writing process.

MR: How about the recording process?

JB: That varies more with producers than with the band. This was our first time working with Bill [Stevenson] and Jason [Livermore] at the Blasting Room, and their protocol is very different from anything we've done in the past. The recording, too, was streamlined, which was great for us. The studio is set up with three rooms working on the current project at all times, so things just keep clipping along. There's really no down time for anyone, at that helped keep the creative process working at a high level.

MR: The name of the album is Exister after one of your songs. How does "Exister" apply to the project as a whole?

JB: In the sense that the meaning of it, "to exist," is probably what we're most proud of as band--we're having fun making relative music that we think is the best we've done, and people still care. Can't ask for more than that.

CW: Hmmmm, I think the title just fit for the album. As a song, it's about a buddy of mine, Jonathan Coody. We talk a lot about song writing and such, and we're pretty close. try to keep each other in the loop with what we are up to. But, one day we were on the phone, and he told me he wanted me to write a song about him working at this shitty job he was at. So I did. And for an album that had a lot of songs about our everyday lives, and trying to reevaluate how we fit into the world around us. It just kinda fit.

MR: Is there a story behind any of the songs on the project that's your favorite?

MR: Had American Idol contacted you to have a Hot Water Music night?

JB: No...I hate that show with all of my heart.

CW: No, that was a hoax. But have you heard Steven Tyler's cover of "Incisions"? it's wild.

MR: Who are some of your contemporaries that you like or toured with and would love to tour with again?

CW: I'll go anywhere with the Bouncing Souls. Our last tour down to Australia with them might have been the most fun tour i've ever been on. We brought EVERYONE with us. I think we had 15 people on that tour! It was all love and family... Just amazing.

JB: We're lucky enough to be able to spend a lot of our time on the road with our friends and not much of anyone else. Bands like Bouncing Souls, Alkaline Trio, our friend Dave Hause...we're very lucky that we really do genuinely enjoy the company of most bands we tour with, and hopefully the feeling is mutual. We'll be heading out with another couple of bands that we've been itching to get on the road with for a long time this fall, but we can't get into specifics just yet.

MR: Where's the tour going to support the new album?

JB: We have some scattered record release shows right around, obviously, the release date of May 15. Those are in Philly, NJ, NYC, Montreal, LA, Orange County, and Vegas. Some cool stops in there with Bamboozle, Pouzza, and Punk Rock Bowling. After that we have some festivals in Europe, and then we'll be back in the US in the early fall for a much longer tour than we've done in a long time.

MR: One of your shows sold out in two hour in Philly? What's up with that?

CW: I have no idea! But that's pretty radical! I can't wait to get there... gonna be a good weekend.

JB: We use Twitter and Facebook as much as we can, but I try to be pretty respectful of having a direct line to fans like that. No one wants to hear the same thing 20 times in a row, nor do they want to see a bunch of retweets quoting people saying how awesome your band is. If people follow you, pretty basic assumption is that they're a fan and don't need convincing.

MR: What is your advice for new artists or bands?

JB: It sounds very silly and obvious, but the best advice I could give to someone is to make sure you really love what you're doing. It isn't easy--ever--so if you don't love it, you're going to burn out fast.

MR: Exister is your eight album, but with the new project, does Hot Water Music, in some ways, feel like a new band?

JB: Not a new band, but we definitely felt like we had a clean slate with this record. To quote George, "This feels like our first record in a lot of ways." I think that's very succinct.

CW: No, not a new band. It feels like we've found our way back to what started all this. We just like playing together. And that's what we're gonna do.

MR: Any words of wisdom?

Here is the highly anticipated first single, "State Of Grace," from the first album released by Hot Water Music after eight years, Exister. 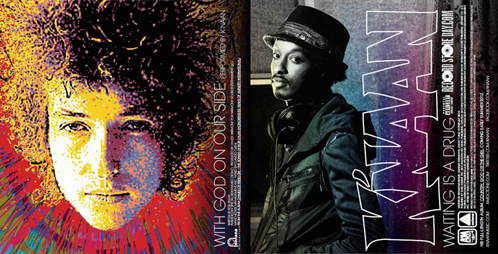 In celebration of Record Store Day, Global MC singer, songwriter and activist K'NAAN, will be releasing a limited edition 7". The free 7" will include an unreleased track "Waiting is a Drug," along with K'NAAN's cover of Bob Dylan's "With God On Our Side," from the recently released Chimes of Freedom charity album for Amnesty International. Saturday, April 21, it will be available a participating Independent record store in your area.

In support of the release, I am premiering three exclusive fan-made viral videos for the song "Waiting is a Drug" and streams of the two songs featured on the 7."

To find a participating record store, go to: http://recordstoreday.com and discover more from K'NAAN at http://knaanmusic.com

"Waiting is A Drug" Videos:

....and in the spirit of sharing, here's Glen Hansard's latest video, "Love Don't Leave Me Waiting."