Good evening, America. President Barack Obama gives his State of the Union address Tuesday night. You know what that means: Political reporters and pundits across the country will watch the president's oration carefully and parse the hidden messages contained therein obsessively, while the rest of the country takes the opportunity to catch up with the shows they've missed on Hulu. (May we recommend "Marry Me"? Casey Wilson is a very underrated comedic performer.)

As usual, we'll point out that State of the Union addresses are vastly overrated as a phenomenon. They don't lead to big poll bounces for the speaker and they rarely even foster much in the way of immediate persuasion. The best, sober-minded way to watch a State of the Union address is to take stock in the policy initiatives the president puts forth. Most of them will tend to be policies that are already wildly popular with the public, and the president will be simply seeking to "facilitate change in a favorable environment." In other instances, the president will be signaling to legislators what agenda items he is most interested in negotiating, and how aggressively. (Early indications are that Obama will be talking at length about improving the lot of the middle class. What he proposes to do may include things that a GOP majority legislature won't countenance.)

But since most of you aren't here for a sober-minded experience of any kind, and since we're nothing if not enablers of demented behavior, we can help with that as well, applying all of our knowledge of having to sit through too many of these things.

There are a lot of things that you can bet Obama will talk about. So take a sip if he mentions his free community college proposal or paid family leave reforms. If he mentions something like increasing free broadband access, take a generous pull of your libation. But if he says that he's had it with daylight saving time, or announces that he's going to create "The Beygency" to deal with Mike Huckabee's continuing slander against our Beyonce, finish that drink and move on to another.

The pageantry of this pseudo-event is also ripe for comedy. Watch Obama as he makes his way down the aisle to the dais, sipping every time he shakes the hand of someone you recognize. Take a longer drink every time someone hugs him a little too long, or does something awkward. Watch Vice President Joe Biden and Speaker of the House John Boehner as well -- they'll be in the camera shot as Obama's speaking. By now, you should know when Uncle Joe is behaving himself and when he's acting out, so drink accordingly. Also, Obama will typically say something gracious about the speaker: Take a sip if he successfully solicits a smile; finish that beer if he brings Boehner to tears.

Current events and culture impinge on the proceedings as well. If Obama says, "Je suis Charlie," go ahead and have a drink. If he reads the opening chapter of Thomas Piketty's Capital In The Twenty-First Century in the original french, line up some shots.

Please consult our special State of the Union drinking game guide below, and feel free to tweet @HuffPostComedy your suggestions for additional rules.

As always, if it turns out that North Korean hackers successfully prevent transmission of the State of the Union, grab your liquor and go to a safe and undisclosed location. 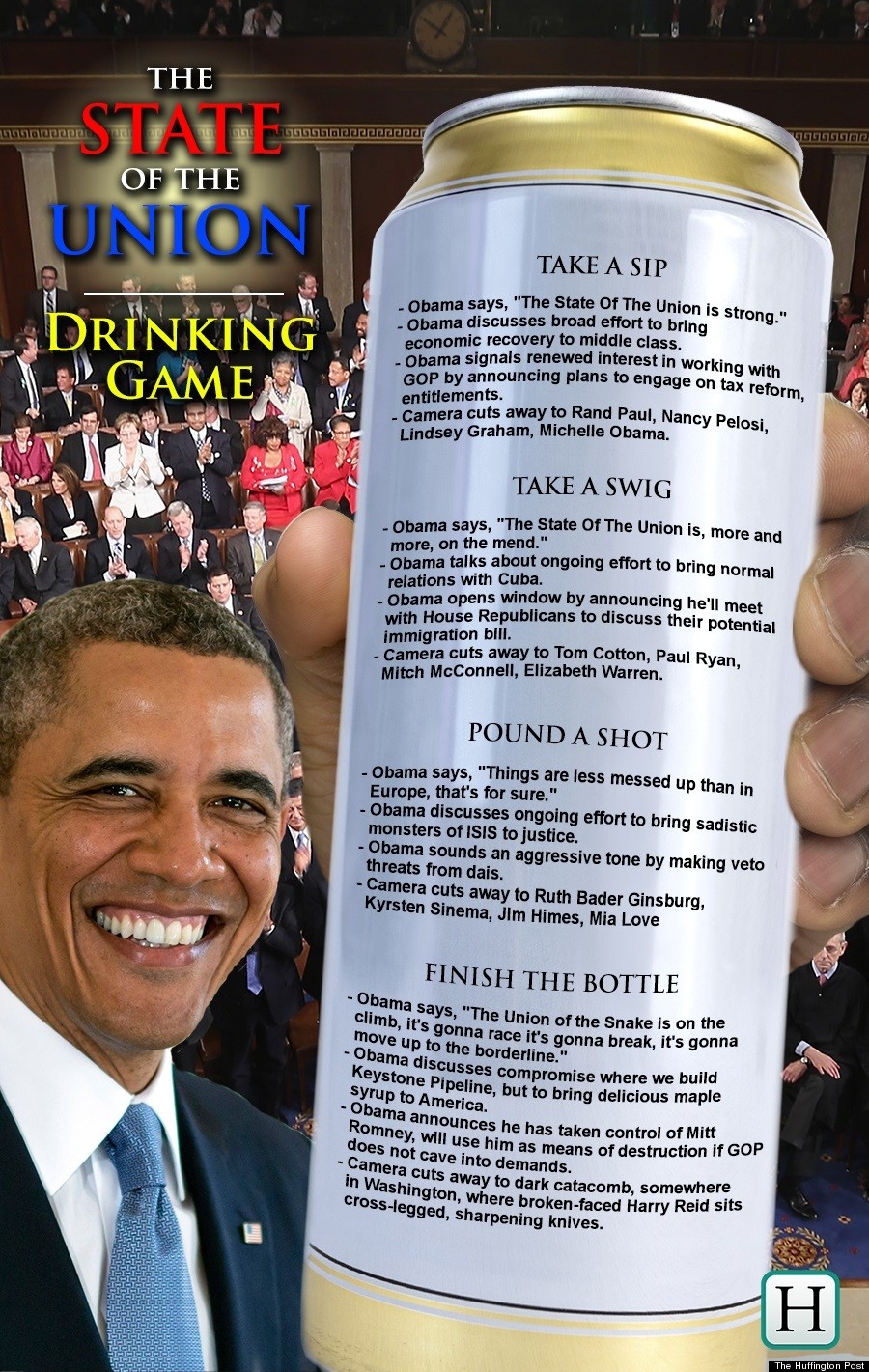