WASHINGTON -- The economic vision President Barack Obama laid out in last Tuesday's State of the Union has widespread appeal, as do many of his key policy proposals -- but many Americans still see that agenda as unlikely to help them on a personal level.

Obama was addressing a broad swath of the U.S. with his focus on "middle-class economics." Even as a recent recovery has made the economy slightly less of a priority than in past years, it remains among the issues that most concern the public, and Americans at every income level between $30,000 and $100,000 are likely to identify their own earnings as being middle-class. Most people think income inequality is increasing, and 2014 exit polling found that nearly two-thirds of voters nationally thought the U.S. economy favored the wealthy.

But while some of the specific, progressive ideas the president proposed -- from raising the minimum wage to leveling the pay gap and providing for childcare -- are popular, they're also not ideas most Americans see as likely to affect their own lives: 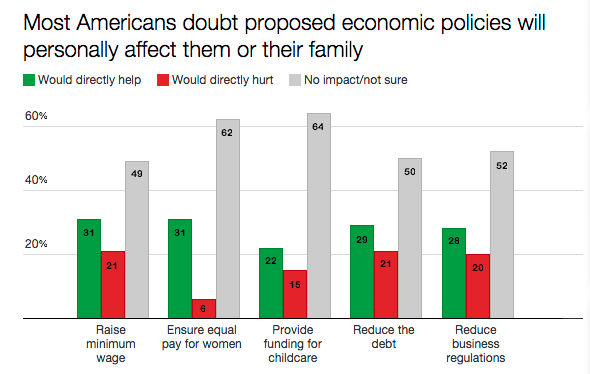 There's broad public support for raising the federal minimum wage to $10.10, which Obama called for in his 2014 State of the Union and reiterated this year. Midterm exit polls found that most voters supported a raise, even in states like Georgia and Iowa, where Republicans won by significant margins.

Most Americans, though, don't see a raise as helping them personally. In a HuffPost/YouGov poll taken in December, just 31 percent of Americans said raising the minimum wage would directly help them or their family. Another 21 percent said it would directly hurt them, while 49 percent weren't sure, or said it would have no direct impact.

And while equal pay is cited as a top issue for working women and affordable child care is almost universally seen as a good idea, just 31 percent of Americans said they'd see a direct and positive impact from funding for childcare, while 22 percent said they'd see a positive impact from a law to ensure equal pay for women. Fewer than a quarter predicted that they'd be negatively affected by any of those ideas, either -- the predominant response was apathy.

Even some of the groups who might be expected to benefit most from the proposals are doubtful. Fifty-seven percent of Americans in households making less than $40,000 a year don't think a minimum wage increase would help them, while 64 percent of women don't expect a direct boost from a law to help ensure the genders are paid equally.

The challenge isn't unique to Democratic policies. GOP priorities like reducing the federal debt and scaling back business regulations are also seen as personally helpful by fewer than a third of Americans, and are perceived as hurtful by nearly as many.

The quandary, however, is perhaps especially pronounced for Democrats. The least financially stable Americans, who are most likely both to support a social safety net and to rely on it, are also the least likely to turn out in elections or generally to be involved in politics.

Democrats also need to continue working to convince voters that their proposals are part of a larger, coherent economic message -- something that was seemingly lost in 2014, when the GOP was seen as focusing more on the economy.

Polling has found Democrats are better trusted to address the income gap, but have less of an edge on the economy as a whole. One Democratic-sponsored poll, conducted just after the 2014 election, found that progressive and conservative economic messages were about equally popular, regardless of whether they were overtly labeled as ideological or not.

In the HuffPost/YouGov survey, just 32 percent of Americans said Democrats' economic policies are more likely to directly help them and their family, while 27 percent said the Republicans' policies are. Forty percent said neither would, or weren't sure.