Last week in his State of the Union address, President Obama openly admonished the Supreme Court for their decision in Citizens United v. Federal Election Commission. For me, it was my favorite part of his address. The Justices present in the gallery gasped. How could he rebuke them in the State of the Union? This was simply not something a sitting President should be doing. To quote the President, he said to the Supreme Court and the world listening, that
the Court decision in Citizens United v. Federal Election Commission will "open the floodgates for special interests, including foreign corporations, to spend without limit in our elections." The President continued, that with this decision it is possible for American elections to be "bankrolled by America's most powerful interests, or worse, by foreign entities." I have to agree with President Obama and I applaud his courage and his conviction in outing the court on this one. 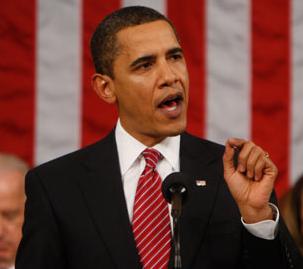 Pictured: President Obama gave the Judicial Branch his own opinion in his recent State of the Union address.

As a law school graduate who hasn't read a Supreme Court Decision in several years, the decision in Citizens United v. Federal Election Commission shocked me to the extent that I had to go running to the Internet and do legal research. This decision makes me even want to Shepardize case law again (electronically of course) and pour over dusty old law books late at night.

I wrote my law school thesis on how the Rehnquist court eroded many of the rights granted by the Warren Court. And now we have the new Rehnquist court, the Robert's Court. As some of you know, Justice Rehnquist had a somewhat narrow view of equal protection and civil rights. He interpreted the Fourteenth Amendment to mean that the Court "had no business reflecting society's changing and expanding values." It is a fact that Rehnquist voted to reject First Amendment claims 92% of the time. Ironically, the Roberts court used the First Amendment in their reasoning in Citizens United v. Federal Election Commission. That's right, it seems that corporations now have First Amendment rights to free speech. "Government may not suppress political speech on the basis of the speaker's corporate identity," Justice Anthony Kennedy writes in the majority opinion. "No sufficient governmental interest justifies limits on the political speech of nonprofit or for-profit corporations." Silly me, I thought the constitution gave rights to individuals not corporations.

Our sitting President, Barack Obama is a lawyer. I am sure he is a much better student of the court than myself. He has to be scratching his head at night and saying, how did these lawyers on the Supreme Court come to this decision? This decision runs counter to Section 203 of the Bipartisan Campaign Reform Act of 2002(BCRA), (aka the McCain-Feingold Act) the federal law prohibiting corporations and unions from using their general treasury funds to make independent expenditures for speech that is an "electioneering communication" or for speech that expressly advocates the election or defeat of a candidate.

In his dissenting opinion in Citizens United v. Federal Election Commission , Justice John Paul Stevens seemed shocked that the majority felt the need to right the wrongs of large corporations not being able to adequately invest in corporate politics. Oh the inhumanity visited upon these large corporations. The rights they had been deprived of. I had to chuckle reading Justice Stevens dissent when he writes, "While American democracy is imperfect, few outside the majority of this court would have thought its flaws included a dearth of corporate money in politics. The court's ruling threatens to undermine the integrity of elected institutions across the nation." I believe Justice Stevens is now 89 years old. Like Justice William Douglas before him, I believe he refuses to retire from the court in order to uphold civil liberties. Thank you for that Justice Stevens.

Was the President right to admonish the court publicly for their decision? I think yes. Surely if corporations now have the right to free speech, doesn't the leader of the free world, the President of the United States also enjoy that right? I wrote earlier on Huffington Post about how I felt the words of FDR are shadowing President Obama. I heard those echos of Roosevelt again during the State of the Union address. 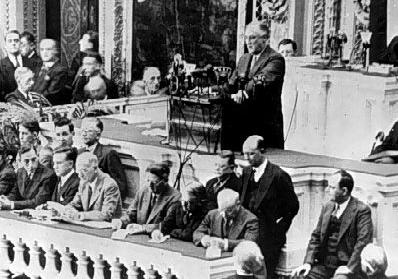 Pictured: President Roosevelt reminded the Supreme Court of their duty to not deny the essential powers of free government.

President Roosevelt also spoke out about the court in a 1937 State of the Union address. In January 1937, in his State of the Union address, President Franklin Roosevelt said, "The Judicial branch also is asked by the people to do its part in making democracy successful. We do not ask the Courts to call non-existent powers into being, but we have a right to expect that conceded powers or those legitimately implied shall be made effective instruments for the common good. The process of our democracy must not be imperiled by the denial of essential powers of free government."

I think FDR was smiling down on President Obama last week. Every 73 years, I think it is good for the sitting President to lay a little Supreme Court smack down.