Last year's State of the Union was Jan. 28, 2014. Here's a chart of President Barack Obama's average approval the week before and after, which even when set to be as sensitive as possible to change, looks suspiciously like a straight line: 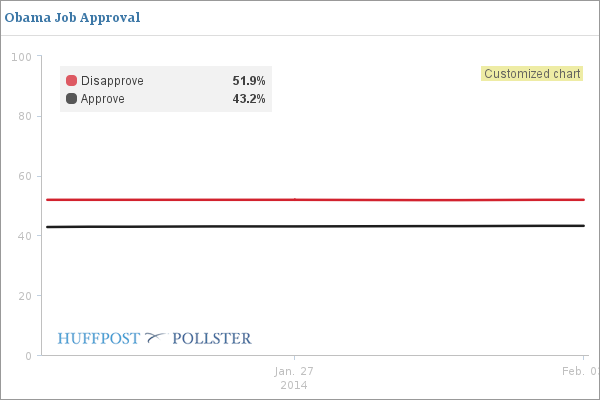 There's a long precedent of the speeches failing to have much of an impact. Most of the speeches delivered since the Carter administration have had only a negligible effect on how the president delivering them was viewed.

It's difficult to change minds when most people aren't tuning in. While 45 percent of Americans told HuffPost last year they planned to watch the 2014 State of the Union, in a new HuffPost/YouGov poll, just 26 percent said they ended up actually watching. Only 15 percent say they watched the entire speech, while the rest saw parts of it or watched clips later on the news.

Just 4 percent, including 11 percent of those who watched the whole thing, say they remember last year's speech very well.

This year, 39 percent of Americans say they intend to watch. As in the past, the audience is weighted toward the president's party -- one reason that post-speech reaction polls have found positive reactions to every speech given since the Clinton administration. Fifty-five percent of Democrats, compared to 34 percent of independents and 29 percent of Republicans, are planning to watch Tuesday's speech.

Unlike last year, when Obama's approval rating had settled into a rut, he now appears to be enjoying a modest resurgence following increasing optimism about the economy.

Only 8 percent of Americans, though, expect there to be even a chance that this year's speech will change their views about the president or political issues, while 66 percent expect it to confirm what they already think, and the remaining 27 percent are unsure.