Last night, President Barack Obama delivered his State of the Union address, intent on being inspiring and hopeful and uniting the country around the shared idea of investing in our future. It was, as he said in remarks that were basically trafficked around the mediasphere for days before the speech, "our Sputnik moment." Well, Americans listened. They found the speech inspiring. They remembered it being hopeful. But mostly, they remember it being about fish.

Yes, the "conversation" has "changed." And mostly it's changed in the direction of a popular fish that's used to make sashimi and is high in Omega-3 fatty acids. It all stems from this joke that President Obama told in the middle of the speech:

We live and do business in the information age, but the last major reorganization of the government happened in the age of black and white TV. There are twelve different agencies that deal with exports. There are at least five different entities that deal with housing policy. Then there's my favorite example: the Interior Department is in charge of salmon while they're in fresh water, but the Commerce Department handles them in when they're in saltwater. And I hear it gets even more complicated once they're smoked.

And, per NPR, that's basically the only thing anyone is going to remember about the 2011 State of the Union address:

Right after President Barack Obama finished his State of the Union address, we asked our listeners to describe his speech in three words. We received responses from more than 4,000 of you. We've run them through a word cloud generator and this is what all of you said: 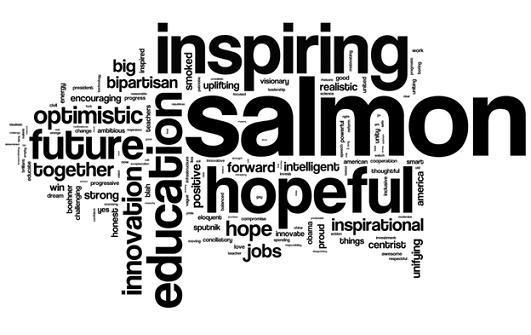 NPR found that even if you break respondents down into Democrats, Republicans, and Independents, the big takeaway was something about salmon.

Still, the good news is that Saddam Hussein did not obtain this salmon from Niger, to make weapons.

READ THE WHOLE THING:
The State Of The Union, In Your Words [NPR]