Through the haze of horror and grief at war scenes around the world, systematic data collection can provide a needed big-picture perspective. The world's experts on war data, in Uppsala, Sweden, recently released the updated dataset on armed conflicts through 2013. 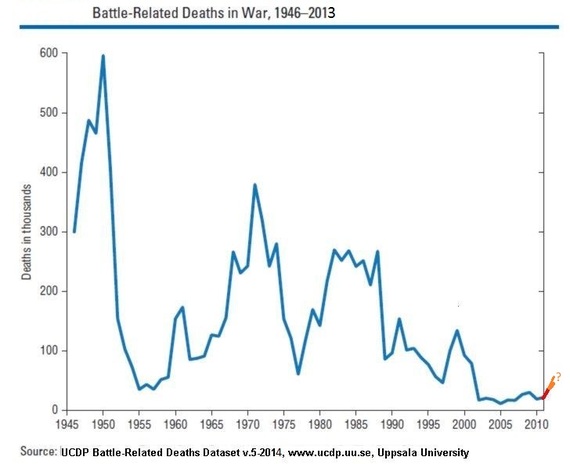 The bad news is that 2013 continued a trend in the wrong direction (so far clearly continuing into 2014), with war increasing in the world. The measure of total "battle-related deaths" refers to military and civilian deaths caused by violence during war fighting, which is only a fraction of total war-related deaths, but more reliable than other measures for tracking trends. The world total battle deaths dropped dramatically from the Cold War era, with around 200,000 annually, to the low point of under 12,000 in 2005 (and typically for years in that period, around 20,000). Since then it has trended up, reaching more than 45,000 last year.

How much more, we don't know, because the data collectors could not come up with a "best-estimate" figure for the war in Syria and gave only a minimum, 22,750. That minimum is about equal to the battle deaths for the rest of the world combined, and the real figure for Syria could easily be double that minimum, which would make Syria a strong majority of the world's battle deaths. Another way to think about this is that if tomorrow a ceasefire took hold in Syria/Iraq (strictly hypothetical under current conditions), the world's battle-death totals would drop by at least half, perhaps two thirds or more, and return the world to the low levels of overall conflicts that characterized the early 2000s.

There is a policy message here: While other international dramas and tragedies flare up, don't lose track of Syria. It is the world's bloodiest conflict by far. The spread of the war to Iraq in 2014 has only strengthened this imperative.

Moving to the rest of the world, the 2013 data list six other "wars," defined as producing more than 1,000 battle-related fatalities in the year. This is an arbitrary definition but one long used by political scientists, and effective in separating smaller, sporadic armed conflicts from more serious ones with regular ongoing fighting. Afghanistan had about 8,000 battle deaths, and the others all fewer than 2,000 -- Iraq, Nigeria, South Sudan, Pakistan, and the Democratic Republic of the Congo.

Another 26 "armed conflicts" were recorded, in 18 countries. (Some countries have several insurgencies at once.) The more serious of these conflicts, with more than 200 battle deaths in 2013, were in India, Mali, the Philippines, Russia, Somalia, Sudan, and Yemen. Today, Ukraine would be in this category, as would Israel/Gaza and the Central African Republic. Others, however, could drop off the list, as some progress toward peace is happening in India, Mali, and the Philippines.

The most positive trend that continues in the world, despite the upsurge of the Syria/Iraq war, is the absence of interstate war in the world, a new development, historically, that has proven robust over the past decade. The war in eastern Ukraine has not escalated to a fight between the regular Russian and Ukrainian armies, a fight that would have crossed the red line against interstate war. Nor have the maritime disputes in the East and South China Seas. The world's regular state armies still threaten each other, with 20 million soldiers worldwide and every conceivable weapon, but none have fought each other in a war for 11 years.

I've revised my "Wars in Progress" page to reflect the new data.