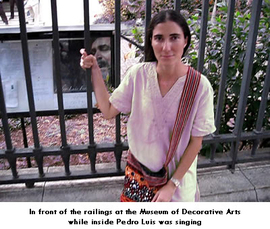 We were going to spend my husband Reinaldo's birthday listening to the songs of Pedro Luis Ferrar at a concert titled "Velorio" at the Museum of Decorative Arts in Vedado. But it happened that the culture police didn't let us enter, using their bodies like a barricade between the door and the seating area. They accused us of wanting to organize a supposed provocation there even though, for us, they and the official television cameras they'd called to film us provoked the major commotion. I believe these anxious boys of State Security are watching a lot of Saturday movies, since our plan was rather familiar -- we even took our son -- and consisted of listening to the songs of the well-known musician and then dropping in at a friend's house.

At the Museum entry a real repudiation meeting* was waiting for us, all it lacked to be complete was the eggs and the blows. A man who didn't identify himself -- continuing the style of not showing one's face -- yelled at me that I wanted "to destroy Cuban culture" and that that space was "only for the people." It seems that what happened at Tania Bruguera's performance has rubbed the nerves raw among the bureaucrats who saw the spectacle. They fear we've returned to seize the microphones, as if it weren't better to put a loudspeaker on every corner for everyone who wants to say something. I must point out that many of those who witnessed this abuse of institutional power avoided greeting us, in view of the huge operation surrounding the place. Nevertheless others, whose names I withhold to protect them, showed solidarity and weren't afraid of being seen with us.

We stay outside the railings and in the patio a strange audience full of retirees and men with military haircuts seemed not to know the songs of Pedro Luis to be able to hum along. Some friends, among them Claudia, came to show solidarity with our forced "exile" and we stayed outside until the last chord was played. When all the musical instruments were in their cases and the troubadour came out he was surprised by what had happened and said he would speak to the vice-minister about it. We didn't want to disabuse him of the idea, but I don't think this high-ranking official could do anything to prevent the actions of a repressive body which is superior to him and of which he's perhaps even a part.

Since I know they read my blog -- all those who prevented me from going inside the railing seemed to know me -- I want to tell them that they are not going to force me to withdraw into my house. I do not think I'll stop going to concerts, clubs, cultural or humorous events. I'm a cultured person, even though they want to reserve such an appellation for a group of ideologically-screened chosen ones. They will have to stand guard in the doors of every theater, club and music room. I could show up at any of them. Who knows if I might climb to the dais and take the microphone? 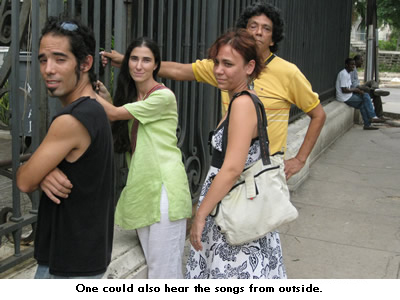 My blog, Generation Y, can be read here in English translation.

My husband, Reinaldo Escobar, has also written about these events and I am appending his blog post here.

Brute Force
By Reinaldo Escobar, from his blog, Desde Aqui

If you have already read Yoani's post it is not necessary to repeat the details of what happened during Pedro Luis Ferrer's last concert in the patio of the Museum of Decorative Arts. I am just writing these lines to warn those of you who aren't aware of the intolerance gaining ground every day in the political life of my country.

With so many terrible things to make public, it doesn't make much sense to use this space to "denounce" the minimal violation we were victims of when they wouldn't let us enter. We know they want to isolate the Generation Y blogger, with so many Cubans identifying with and supporting her it feels like her radioactivity has reached very high levels. They can't stand her, it worries them that a discordant voice can be heard and they are willing to use everything at their disposal to destroy her.

What is serious is not what they did but the audacity with which they acted, in the full light of day in front of witnesses. Yet they still don't have the courage to identify themselves with their real names, even though the whole world knows which institution they answer to. At one point, when I looked into the eyes of the head of the operation, I knew that people like this are capable of anything. Hopefully I'm wrong, but I have the suspicion that these are men who one day could fire on their own people.

*Translator's note:
Repudiation meetings. Canada's Immigration and Refugee Board describes these activities as follows: Acts of repudiation (actos de repudio) are another form of harassment that dissidents in Cuba may face. Amnesty International describes these as "meetings or demonstrations organized by government officials or mass organizations supporting the government at which the person or persons concerned are subjected to criticism and abuse, sometimes physical, because of their so-called `counter-revolutionary' views or activities". The civilian groups that carry out the acts of repudiation are commonly referred to as Rapid Response Brigades and are thought to be initiated by authorities.