States have enacted more abortion restrictions in the past three years than in the entire previous decade, according to a new report by the Guttmacher Institute, a reproductive health research organization.

The number of states considered "hostile" to abortion rights, defined by the Guttmacher Institute as having at least four kinds of major abortion restrictions on the books, has also more than doubled since the year 2000, from 13 states to 27. After North Carolina elected a Republican governor and the Arkansas GOP took control of both legislative chambers in 2012, those states enacted a combined 13 new abortion restrictions in 2013. The number of states that are proactively supportive of abortion rights, meanwhile, has fallen from 17 to 13 since 2000, according to Guttmacher's findings. 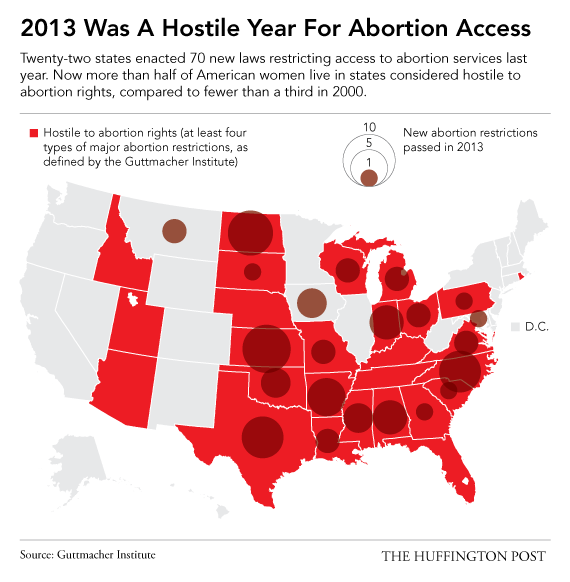 "This is still spreading across the country," Elizabeth Nash, state issues manager for the Guttmacher Institute, told The Huffington Post. "We've seen a shift from 2011 when much of action took place in Kansas, Arizona and Oklahoma. We're now seeing Texas, Arkansas, North Carolina -- more states are adopting more restrictions."

The onslaught of new laws has already taken a significant toll on the ability of abortion providers to keep their doors open. As of August, at least 54 abortion clinics across the country had closed or stopped offering the procedure since 2010, according to The Huffington Post's nationwide survey of state health departments, abortion clinics and local abortion-focused advocacy groups.

"The laws over the past three years are much more burdensome than what we've seen before, and they are very much targeted on abortion providers and shutting down clinics," Nash said. "And when we don't have clinics women are not able to access care, and their rights are then eroded."