WASHINGTON -- After President Barack Obama announced wide-reaching executive actions on immigration last November, officials from 26 states joined a lawsuit to block them. Another 12, plus the District of Columbia, signed on to a brief in support of the president.

Another dozen haven't gotten involved at all, and some observers are asking why. Those 12 states are Alaska, Colorado, Delaware, Kentucky, Minnesota, Missouri, New Hampshire, New Jersey, Pennsylvania, Rhode Island, Virginia and Wyoming.

HuffPost reached out to the offices of those states' governors and attorneys general to see where they stand on Obama's immigration actions and the lawsuit aimed at stopping them.

Many didn't seem to want to talk about their decision to remain on the sidelines -- or at least did not respond to multiple calls and emails from HuffPost. A few said they were supportive of Obama's actions, but said they didn't join the amicus brief because of timing or a practice not to weigh in on lawsuits at an early stage. One, Wyoming, did not join the suit even though the governor believes Obama overstepped his authority. The other states that responded did not give a firm answer either way.

Obama's decision in November to take executive action on immigration, including policies that could allow up to 5 million undocumented immigrants to stay in the U.S. and work legally, were politically polarizing. Republicans opposed the move, saying the president had overstepped his authority.

Then-Texas Attorney General Greg Abbott (R), now the state's governor, led an effort in early December to sue Obama over those policies, contending they are unconstitutional and would hurt the states. The office of current Texas Attorney General Ken Paxton (R) did not respond to requests for comment on the lawsuit or how they set about asking other states to join.

"I feel strongly that the court in Texas should have the perspective of states that feel the president's executive action will be a benefit, not a hinderance to their states," Ferguson told HuffPost on Monday. 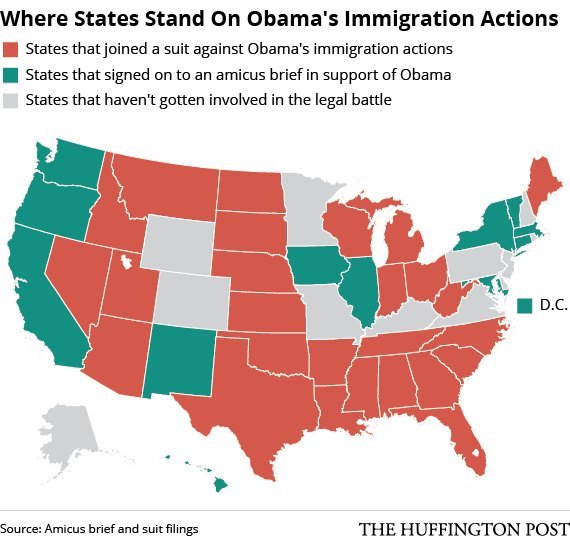 The decision to join a lawsuit is typically up to a state's attorney general, although in this case Republican governors from Mississippi, Maine, North Carolina and Idaho are listed individually on the initial filing. For that reason, HuffPost sought comment from both the governor and attorney general in each of the 12 states that neither joined the lawsuit nor the amicus brief.

Only one such state expressed full support for the original lawsuit. Wyoming Gov. Matt Mead, a Republican, told HuffPost in a statement that, although the state hasn't joined the lawsuit, he "supports it and the claims it presses completely."

"I am confident that, with Texas in the lead, the legal challenge to the President's order is in good hands. Texas will do a great job advocating against executive action that exceeds executive authority and fails in the most vital respect -- securing the border," Mead said, adding that in Wyoming they must focus on "urgent issues involving the Environmental Protection Agency, the Endangered Species Act, and wild horses."

Others went quiet when HuffPost reached out to their officials. In New Jersey -- a state that is nearly 19 percent Latino and led by Republican governor and potential 2016 presidential candidate Chris Christie -- the offices of the governor and the attorney general didn't respond to requests for comment on the lawsuit. (Christie criticized the executive actions back in November.)

Democratic governors and attorneys general in Pennsylvania and New Hampshire also did not respond to HuffPost's requests, along with Minnesota's Democratic-Farmer-Labor Party governor and attorney general.

A spokesman for Missouri Gov. Jay Nixon (D) said the decision was up to the attorney general, but did not respond to a request for additional comment on the governor's own stance on Obama's actions. The office of Missouri Attorney General Chris Koster (D) did not respond to multiple emails and calls from HuffPost.

A press secretary for Alaska Gov. Bill Walker, an independent, said they were not asked to join the amicus brief "and otherwise have no involvement in this matter"; the attorney general's office did not return requests for comment.

Many governors' offices referred HuffPost to the state attorney general's office as the office responsible for making the decision to join a lawsuit or amicus brief. A spokeswoman for Colorado Gov. John Hickenlooper (D) said the state was "not joining or initiating a suit but would need to refer you to the attorney general office for their position." The office of Colorado Attorney General Cynthia Coffman (R) did not respond to a request for comment.

For some states, timing may have been the primary issue. At least two of the attorneys general -- in Colorado and Delaware -- were sworn in either soon before or right after the amicus brief was filed. Coffman, as noted above, did not comment, but that was the reason why Delaware did not join the amicus brief, according to a spokesman for Attorney General Matthew Denn (D).

"The attorney general was asked to consider joining the amicus brief but there were only a few days between when he took office and the deadline, so it was not enough time to properly evaluate the legal arguments being advanced and take a position," Denn spokesman Carl Kanefsky said in an email. "The attorney general is supportive of the president's efforts on immigration."

Kentucky Gov. Steve Beshear (D) issued a statement after the lawsuit was filed saying his office was not asked to join, and that "our internal review indicates that the president was most likely acting within his authority." His office did not offer additional comment last week. A spokesman for Attorney General Jack Conway (D) said "Kentucky was not asked to join the suit, and we are not filing an amicus."

State officials in Rhode Island and Virginia both expressed support for Obama's actions, even though their states did not join the amicus brief. Rhode Island Gov. Gina Raimondo (D) supports the new policy, her spokeswoman told HuffPost, while Virginia Gov. Terry McAuliffe (D) praised Obama's executive actions when they were issued.

Representatives for the Rhode Island and Virginia attorneys general Peter Kilmartin and Mark Herring, both Democrats, said that their offices generally don't sign on to cases until they have advanced further along in the judicial process.

Amy Kempe, Kilmartin's spokeswoman, said via email that he "generally supported the arguments in the amicus in favor of the executive order, and will continue to monitor the case in the event that there is another issue for which amicus support is solicited." Michael Kelly, speaking for Herring, also said their office was keeping an eye on the situation.

States may still have opportunities down the line to join in support of the president. Ferguson, the Washington state attorney general, said his office will likely file additional briefs as the case advances.