A state used to feel like a trusty light switch, a utility. You could see when that little knob was flicked -- to the rescue during times of state disasters like floods, fires and other emergencies. Until recently we always expected the lights would come on, in the same way we expected our banks to be there for us, too. Then, of course, they failed. Overleveraged and unable to pay their bills either, will the states be the next big economic entity not "too big to fail"? 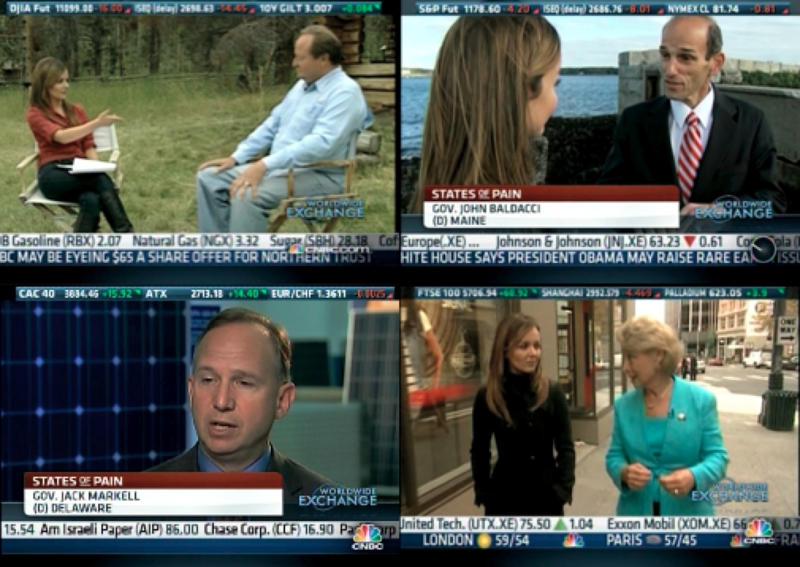 To attempt to answer that question, I recently traveled from Maine to Montana to talk to governors of states in all stages of financial trouble or prosperity for a series called "States of Pain." After all, both the fiscally sound and unsound have reasons to fear the unprecedented failure of any state.

We have all seen the deficit numbers. $25 billion for California. $15 billion for Illinois. $10 billion for New Jersey. Analyst Meredith Whitney, famous for predicting the downfall of the banks, now predicts that we'll all start feeling the states' pain in the spring when federal stimulus money dries up.

Some set the D-Day date for states even earlier, possibly even next month. CEO turned Tennessee Governor Phil Bredesen predicted that, in January, some states would have, "A cliff they've got to navigate. There's going to be some dislocation. You're going to see some problems." When I interviewed him in Nashville for my "States of Pain" series, he chided his gubernatorial colleagues for relying too heavily on federal stimulus money, saying, "an awful lot of states took that money and treated it as continuing money and not like one-time help."

No one disputes the last batch will dry up. Another batch is up for debate, of course.

The federal deficit, however, is unarguably swollen and President Obama has asked the public for good ideas to be sent his way. And, he's going to need some to calm that swell while dealing with some of the world's largest economies -- the states -- and avoid giving the situation a cold shoulder with the subsequent "Ford to City: Drop Dead"-esque headlines of 1975. So, as a member of the public, I am here to suggest, Mr. President, that you deposit your newly found political capital in an unlikely place -- a bankruptcy bid.

Bankruptcy gets a bad rap, but it could be a less costly alternative to another trillion dollar shot in the states' budgetary arm. Technically, states cannot go bankrupt now like cities and counties under Chapter 9. But, the federal bankruptcy code, like the constitution itself, is a living, breathing document -- able to be amended like it has been 27 times before.

Federal Bankruptcy Code likes to play the odds -- Chapter 7, Chapter 9, Chapter 11 and Chapter 13 are the biggies. But there's some room left for the even chapters, particularly Chapter 8. A respected but lesser-known (I predict to be better-known soon) law professor, Professor David Skeel, suggests that a Chapter 8 is theoretically constitutional for Congress to enact. If it is indeed constitutional, then it might just add a much-needed arrow in the quiver of our rapidly-diminishing fiscal and monetary policy toolkit.

"Although bankruptcy would be an imperfect solution to out-of-control state deficits, it's the best option we have, at least if we want to have any chance of avoiding massive federal bailouts of state governments," Skeel recently wrote in The Weekly Standard.

The mere idea of bankruptcy sounds unpalatable to some governors I ran this by, like Mark Parkinson from Kansas. "Declaring bankruptcy is not the answer to the budget crisis facing many states," he told me, adding that "the crippling public relations message bankruptcy would send to businesses and investors and the ripple effect on local communities is too high a price to pay for any potential upsides."

True, at first glance, it seems nuclear. But, the potential upsides to allowing states to declare bankruptcy are far too compelling to dismiss outright. Namely, it would give bite to the barking we've been hearing from the states' governors, like Parkinson, letting them play hardball with their biggest creditors -- bondholders and union contracts.

I'm not suggesting that bankruptcy is the only option. It's not even a good one to see to fruition, but the mere threat might reduce the burden on Congress to push through more stimulus or a state bailout.

"Some of the biggest benefits would occur even if no state ever actually filed for bankruptcy," Skeel tells me. "Creditors might agree to much more meaningful concessions if the alternative is a messy bankruptcy that would require even greater concessions." 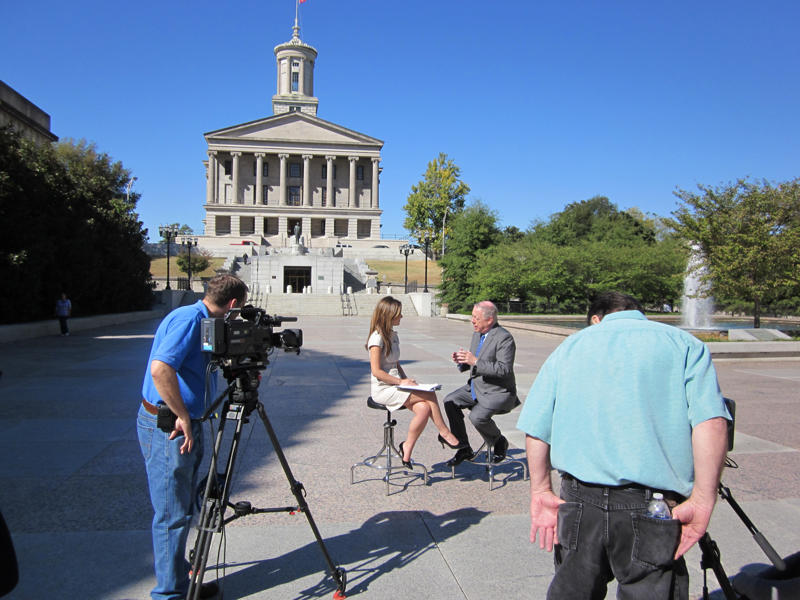 But, it's those greater concessions that make municipal bondholders cry foul. While Bond King Bill Gross, founder of world's largest bond fund PIMCO, is going deep into California and New York munis, claiming the returns are still the best in the market despite the headline risk, even the discussion of bankruptcy as a bargaining chip has caused some to fear bond market hysteria.

"There's no question the bond markets would be unhappy if a bankruptcy law were passed, but they're already starting to price in the prospect of a default," Skeel tells me.

"What the bondholders who claim that the enactment of a bankruptcy law would mean Armageddon for the markets really want -- just as with the big banks in 2008 -- is to be bailed out if the states can't afford to pay." Skeel believes "everyone needs to sacrifice if a state is in financial crisis; bondholders shouldn't simply be given a pass."

Reuters' blogger Felix Simon suggests, though, that bankruptcy is more of a Band-Aid on a gunshot wood and doesn't avoid a bailout, it just delays the inevitable. If Chapter 8 bankruptcy was an option, Simon says "prices of municipal bonds would plunge, and most states would find it pretty much impossible to borrow money." (Although, GM's expedited pre-packaged bankruptcy and subsequent IPO would challenge that idea.)

A disrupted muni market, also, seems negligible compared to the ramifications of the federal government getting in the foxhole with states. But, Simon continues, "As such, facing a massive and immediate liquidity crisis, they would be in more need of a federal bailout than before the bankruptcy legislation was seriously mooted."

"Given the general political consensus against future bailouts, maybe just maybe, this is something to think about. And better to do the thinking now, rather than when such a tool is actually needed, fast," opined bankruptcy expert Stephen Lubben for Dealbook.

Fast is already here if you take into account what economist Nouriel Roubini recently told me. Dr. Doom already cast his spell on the states, telling me debt is up to 20% of state GDP and unfunded liabilities of state and local pension funds is another 20% of GDP, or $3-5 trillion.

The argument that the states' GDPs are huge relative to their debts is right, of course, until it's wrong. Panic is inevitable if a big state fails -- you'd have a run on the bank, or should I say a run on the state.

As such, a panel including former White House officials Robert Rubin, Glenn Hubbard and Josh Bolton met in October to simulate what it would look like if a state went down. They set the scenario in 2013, when the fictional state of New Jefferson -- said to be the third largest U.S. state -- faces a $1.5 billion bond payment. Its governor and legislators are gridlocked. The mock governor calls on the Fed for an emergency loan to avoid default and another sizable loan to keep the state afloat. Then the chairman of the National Economic Council calls a meeting. This is where the simulation kicked in real-time; the audience watched as the mock Treasury secretary, Fed chairman, chief of staff, chairman of the Council of Economic Advisers decided the fate of New Jefferson and analyzed the systemic risk.

It doesn't need to be Too Big to Fail Déjà vu just yet.

"There are ominous parallels between the states' predicament and the condition of the big banks in 2008 before they were bailed out. The one big difference is that, this time, we can see the problem before it blows up and we have a real opportunity to do something about it before it's too late," says Skeel.

We know the lights are flickering in 48 of 50 statehouses right now. The question has become, do you light a candle or pray the water won't shut off, too?