More than half of the residents of Utah say they attend religious services every week, according to a new survey from Gallup.

Gallup polled a random sample of 177,030 American adults, aged 18 and older, between Jan. 2 and Dec. 30, 2014, asking each person how often they attended church, synagogue or mosque -- at least once a week, almost every week, about once a month or seldom or never.

Between Utah and Vermont -- the state with the lowest weekly religious service attendance -- there is a differential of 34 percentage points, reflecting what Gallup describes as a broad spectrum of "Americans' views on life, culture, society in general and politics."

Utah's 59 percent Mormon majority may explain the state's top ranking, as Mormons report the highest religious service attendance of any other religion -- 75 percent compared to 45 percent of Catholics and 19 percent of Jews.

Religiosity tends to cluster in various regions of the country, with the South demonstrating highest attendance of weekly religious services and the Northeast demonstrating the lowest: 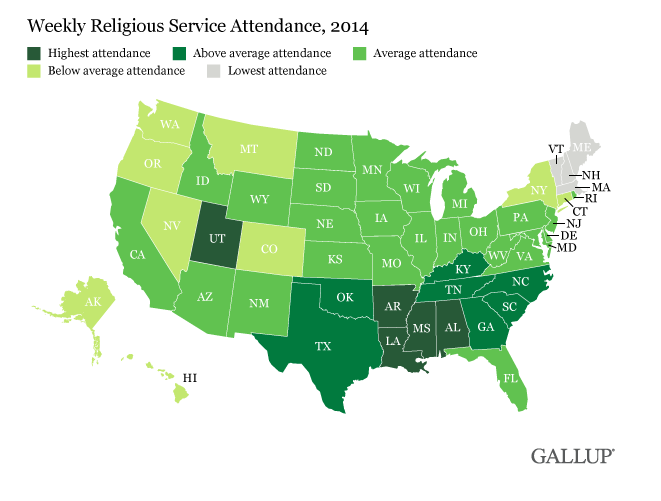 Click through the slideshow below to see the states with the highest and lowest weekly religious service attendance: