In seven states drought conditions were so severe that each had more than half of its land area in severe drought. Severe drought is characterized by crop loss, frequent water shortages, and mandatory water use restrictions. Based on data from the U.S. Drought Monitor, 24/7 Wall St. reviewed the states with the highest levels of severe drought.

In an interview, U.S. Department of Agriculture (USDA) meteorologist Brad Rippey, told 24/7 Wall St. that drought has been a long-running issue in parts of the country. “This drought has dragged on for three and a half years in some areas, particularly [in] North Texas,” Rippey said.

Click here to see the states running out of water.

While large portions of the seven states suffer from severe drought, in some parts of these states drought conditions are even worse. In six of the seven states with the highest levels of drought, more than 30% of each state was in extreme drought as of last week, a more severe level of drought characterized by major crop and pasture losses, as well as widespread water shortages. Additionally, in California and Oklahoma, 25% and 30% of the states, respectively, suffered from exceptional drought, the highest severity classification. Under exceptional drought, crop and pasture loss is widespread, and shortages of well and reservoir water can lead to water emergencies.

Drought has had a major impact on important crops such as winter wheat. “So much of the winter wheat is grown across the southern half of the Great Plains,” Rippey said, an area that includes Texas, Oklahoma, and Kansas, three of the hardest-hit states. Texas alone had nearly a quarter of a million farms in 2012, the most out of any state, while neighboring Oklahoma had more than 80,000 farms, trailing only three other states.

In the Southwest, concerns are less-focused on agriculture and more on reservoir levels, explained Rippey. In Arizona, reservoir levels were just two-thirds of their usual average. Worse still, in New Mexico, reservoir stores were only slightly more than half of their normal levels. “And Nevada is the worst of all. We see storage there at about a third of what you would expect,” Rippey said.

The situation in California may well be the most problematic of any state. The entire state was suffering from severe drought as of last week, and 75% of all land area was under extreme drought. “Reservoirs which are generally fed by the Sierra Nevadas and the southern Cascades [are] where we see the real problems,” Rippey said. Restrictions on agricultural water use has forced many California farmers to leave fields fallow, he added. “At [the current] usage rate, California has less than two years of water remaining.”

The U.S. Drought Monitor is produced by the U.S. Department of Agriculture (USDA), the National Oceanic Atmospheric Administration (NOAA), and the National Drought Mitigation Center at the University of Nebraska-Lincoln. 24/7 Wall St. reviewed the seven states with the highest proportions of total area classified in at least a state of severe drought as of May 13, 2014. We also reviewed figures recently published by the USDA’s National Agricultural Statistics Service as part of its 2012 Census of Agriculture.

These are the seven states running out of water.

PHOTO GALLERY
7 States Running Out Of Water
Download
Calling all HuffPost superfans!
Sign up for membership to become a founding member and help shape HuffPost's next chapter
Join HuffPost 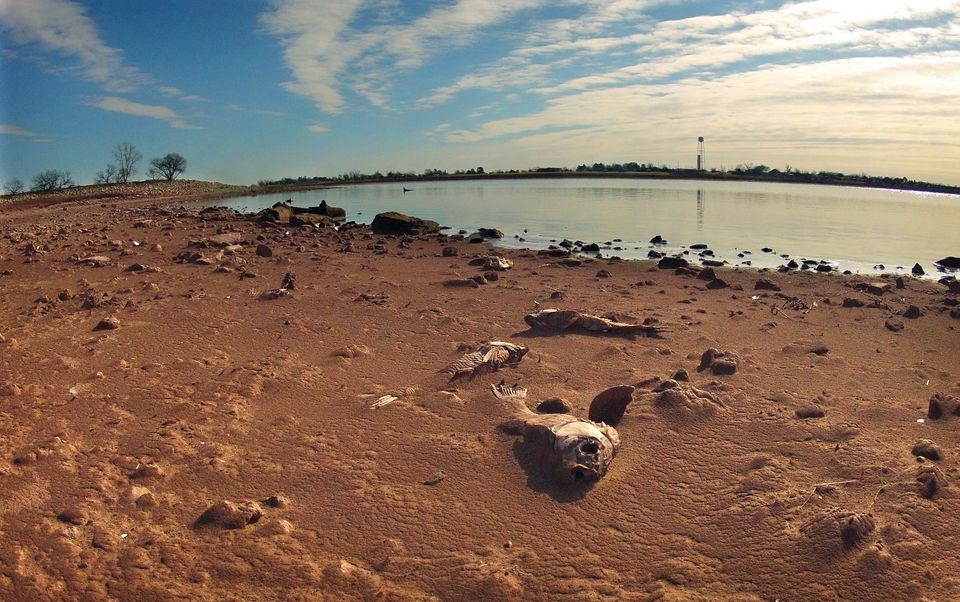 1 / 7
7. Texas
> Pct. severe drought: 56.1% > Pct. extreme drought: 39.9% (4th highest) > Pct. exceptional drought: 20.7% (3rd highest) Much of north and central Texas, including all of the Texas Panhandle, was covered in exceptional drought as of last week. In all, almost 40% of land area in the state experienced extreme drought conditions. Recently, some have said the heavy use of water in natural gas fracking processes in North Texas is problematic during the area’s drought. Additionally, the drought could have a large impact on the state’s agriculture industry. Texas had nearly a quarter of a million farms, the most out of any state in the nation, as of 2012.
AP