So, bad news South, Northeast and West Coast: You are totally not surviving the zombie apocalypse.

While the best measure of a state's success is highly debatable (employment, economic health, robust public education system, resident happiness, etc.), the good folks over at Estately know that the only true marker is a state's ability to survive a zombie takeover.

Using metrics like fighting ability, military personnel, knowledge of zombies, physical fitness and access to weapons, Estately ranked each state in the country (and the District of Columbia) and explained the results in a chart. For instance, California gained points for physical activity and fitness, but got low scores for its low number of trained fighters and strict gun control laws.

"Basically, California isn't going to be the all-you-can-eat brain buffet for zombies that New Jersey will be, but it's not going to escape like its neighbors Nevada and Arizona," explained Ryan Nickum of Estately to The Huffington Post.

Check out which states definitely WILL SURVIVE the Zombie Apocalypse:

5
New Mexico
Flickr:Summer Foovay
New Mexico's high rankings of martial arts practice, zombie knowledge and Ironman triathletes makes this state a good defensive spot. The green chiles aren't bad either.
4
Idaho
Flickr:DonMiller_ToGo
Paintball and laser tag enthusiasts, high survival skills and a physically fit population have ranked Idaho as the fourth best spot for surviving the zombie apocalypse.
3
Colorado
Flickr:maspangler
But Idaho's fitness has nothing on Colorado's, which also has the lowest obesity rates in the country.
Advertisement
2
Wyoming
Flickr:diana_robinson
One thing Colorado is missing, however: guns. Never fear, Wyoming's gun supply is humbled only by its zombie knowledge and survival skills, making it the second best place to survive zombie warfare.
1
Alaska
Flickr:terrybaojr
Somehow we are not surprised. Military personnel? More than anywhere else in the nation. Veterans? Loads of them. Guns? Check. Physical activity? Check. Survival skills? This is Alaska, for Pete's sake. Throw in some zombie knowledge (and not to mention soul-crushing vastness and isolation) and you've got yourself the number one state in the nation for surviving the zombie apocalypse. Winter is coming and Alaska invented winter.

5
Georgia
AP
While Georgia isn't the worst place to be when the zombies strike, it's certainly not the best place. The high number of military personnel lends a hand, as does the relatively high number of laser tag enthusiasts. But low rankings in survival skills, martial arts training and number of athletes aren't helping.
4
New York
Getty Images
New York is basically the set of a zombie film. Its main borough is a sprawling metropolis on top of an island -- how do you think you're getting out? Throw in the complete lack of guns and survival skills, the low number of veterans, and people who don't have time for things like paintball and it's a zombie paradise.
3
Washington, D.C.
Flickr:JustinSchuck
The President might be safe but that doesn't mean you are. Your big braaaaaaain is the stuff of zombie fodder. No guns, no survival skills and no zombie knowledge? No chance.
Advertisement
2
Mississippi
Flickr:tvdxer
"Look at this lovely view of the University of Mississippi Medical Center," thought the zombie as it was eating your brain. Mississippi scored low marks in nearly every category, including physical activity, obesity, paintball and zombie knowledge. If it wasn't for the military personnel and gun ownership, zombie refuge might be a lost cause.
1
New Jersey
Flickr:mike.m.carlino
New Jersey, you might already be zombies. If it weren't for Washington, D.C., you'd be dead last in survival skills, dead last in zombie knowledge and dead last in gun ownership. So why isn't D.C. dead last? Because at least they know how to play laser tag. New Jersey, you are officially the worst place for surviving the zombie apocalypse.

Don't believe the rankings? Check out the metrics yourself in the chart below, courtesy of Estately. 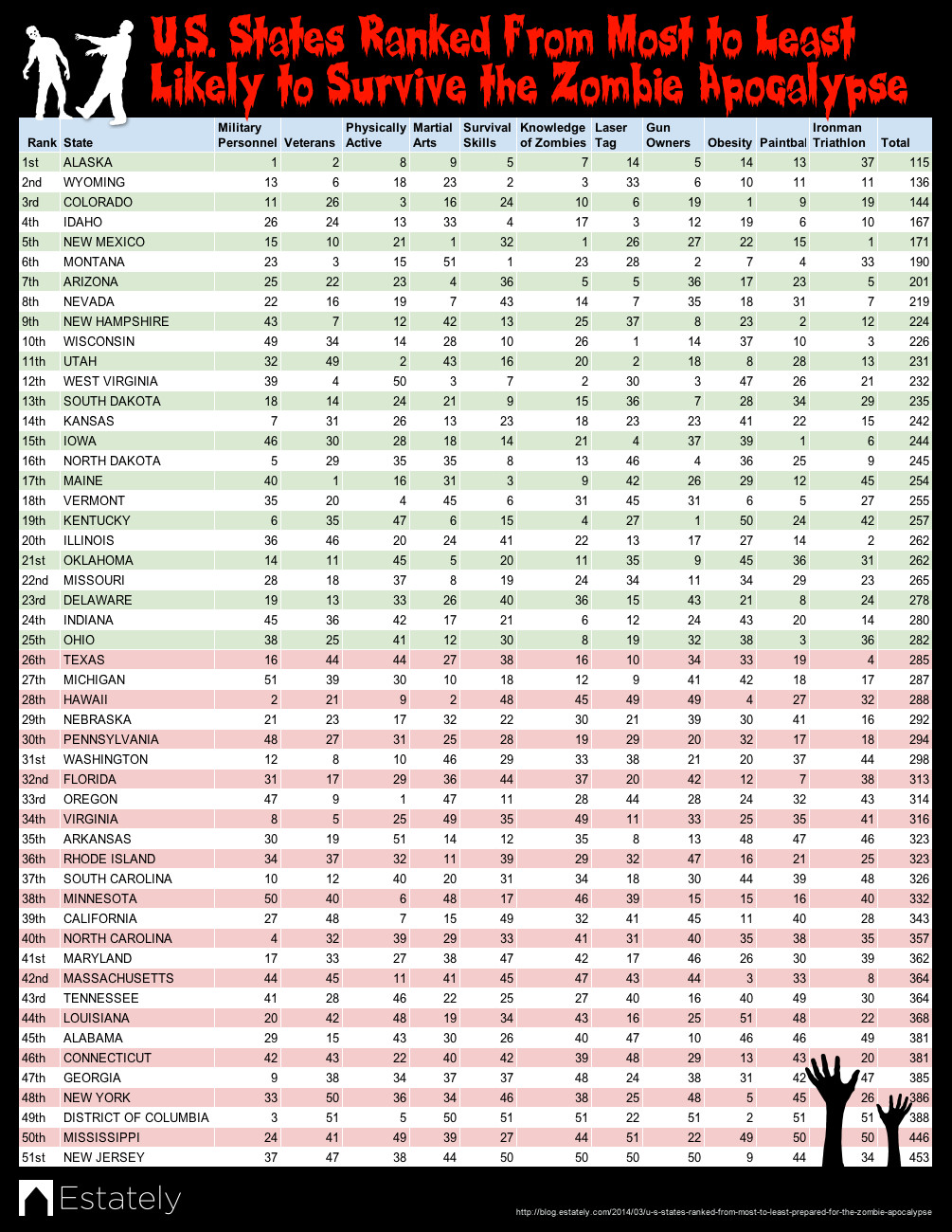