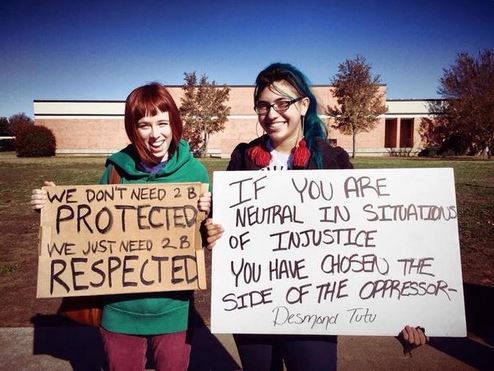 In one, small-town Oklahoma school, teenage girls have been given a message loud and clear: If you're raped, it's your fault.

This was the reality met by three students in the city of Norman, who -- after reporting being raped by the same boy -- were met with institutional indifference, victim shaming and bullying, prompting all to drop out of school. (The alleged perpetrator was kicked out of school, but for a separate offense of circulating a video of him penetrating one of the girls; he has not yet been punished in any other way).

Only a local feminist knitting group (yes, you read that right) was finally able to rally support for the girls, bringing national attention to the story. Today, their efforts culminated in a protest and walkout -- backed by the social media campaign and ideological movement #YesAllDaughters -- which (surprise!) was opposed by the same school officials who neglected to provide any shred of justice for the girls.

You can read about the whole sordid incident here, but suffice it to say, it's a particularly upsetting one -- so upsetting, in fact, that it can feel easier to relegate it to some place over there. In cases like these -- especially if the details are this grotesque -- revulsion and despair can induce, perpetuate, and promote an insular view. It's not in my hometown so ...

Yet in reality, the particular facets of this case -- the perpetrator's blase attitude toward sexual assault, the school board's turning of a blind eye, the inclination to blame and bully the victims -- manifest truths that are endemic to the rape culture that this and any story like it need to be contextualized within. Indeed, the brilliance of campaigns like #YesAllDaughters is that they achieve a bird's eye view, zooming out from what could be a passing -- if disturbing -- anecdote, to reveal its place in the bigger picture.

What exactly does that bigger picture look like? Here are some facts and statistics to keep in mind when reading about this case. Context, as they say, is key:

•In one study of Louisiana public high schools, one out of five students reported they had experienced forced sex. Of these, only half had told about the experience.

•The Louisiana study also found that the majority of boys (60%) found it acceptable in one or more situations for a boy to force sex on a girl. In a national report on high school students, 56% of girls and 76% of boys said they believed forced sex was acceptable under some circumstances.

•50% of youth reporting both dating violence and rape also reported attempting suicide, compared to 12.5% of non-abused girls and 5.4% of non-abused boys.

All of this is to say: This incident did not happen over there. It is happening here, and will continue to do so as long as the issues within the culture that fostered it are not addressed. This is a protest that demands efforts which go well beyond the front of a high school in one small Oklahoma town.

This is a protest that belongs in every high school, everywhere. #YesAllDaughters