125 years ago on October 28, 1886, the Statue of Liberty was formally unveiled and dedicated. In spite of wet and foggy weather, roughly a million people -- or approximately one in every 60 residents of America at the time -- were on hand to watch President Cleveland accept this remarkable gift from France. Reading his words (from the newspaper account below), I couldn't help but ponder how they would be received today:

"We are not here today to bow before the representation of a fierce and warlike god, filled with wrath and vengeance, but we joyously contemplate instead our own deity keeping watch and ward before the open gates of America, and greater than all that have been celebrated in ancient song. Instead of grasping in her hand thunderbolts of terror and of death, she holds aloft the light which illumines the way to man's enfranchisement."

"Open gates" and "man's enfranchisement" seem to be the last thing many want today, and it's telling to note how frequently Liberty's sister site of Ellis Island is incorporated in anti-immigration missives. "My grandfather came here legally through Ellis Island" is an oft-seen phrase in opinion pieces written by those who are unaware that coming here legally at the time was mostly a matter of not being among the two percent deported for health issues such as trachoma and tuberculosis. When the odds were 49 to 1 in your favor, there wasn't much incentive to try to slip in unnoticed. Even so, the fact that Lady Liberty's 125th anniversary is being celebrated shows that many still support the "give me your tired, your poor" attitude that welcomed our ancestors.

Those who'd like to join in the festivities but can't be there can participate long-distance by downloading "Gift of Light" from iTunes or checking out the views from her torch which has been closed to the public since 1916. As for me, I'll be celebrating in a more private way by remembering my great-grandmother, Parania Lukacz. Parania, who would later go by Pauline or Polly, arrived at Ellis Island on October 28, 1911 after a ten-day journey from Hamburg on the S.S. Kaiserin Auguste Victoria. The passenger manifest records that she was five feet tall with brown hair, grey eyes and scar over her right temple. It was exactly 100 years ago, and as luck would have it, the Statue of Liberty's 25th birthday. 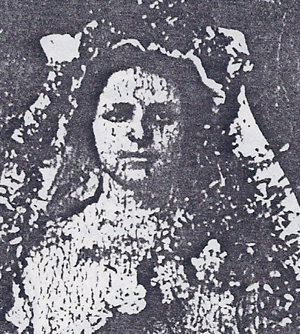 Parania left Mosty Wielkie in what's now western Ukraine to join some coal-mining brothers in Wilkes-Barre, Pennsylvania. She would go on to marry an immigrant from a neighboring, old-country village and have six children. According to a niece who regarded her as a substitute mother since her own never came to America, "My Aunt Pauline was a very hard working woman, got along very good with all her neighbors, kept herself and her home and children very clean. She was a wonderful person."

By all rights, I should have known my great-grandmother since I was born when she would have been in her 60s, but that privilege was denied by my great-grandfather, a violent man who cut her life considerably short. She must have suspected what was coming because she had made arrangements to leave money for her children, but her husband managed to circumvent that by giving the local saloon keeper legal guardianship of the children less than three weeks after he killed her. Given that the children never left the family home, my guess is that he was paying off his tab with his kids' inheritance.

So Parania's American dream ended about as badly as possible, but all that was in her future when she arrived on that auspicious day. And so, too, were her dozens of descendants who have all had opportunities she never could have imagined. We've all reaped the benefits of the chances she was willing to take. Her husband never troubled to get naturalized, and at the time, married women received their citizenship through their husband's, so Parania died an alien. But to me, this tiny, gutsy immigrant stands as tall and will always be as American as Lady Liberty herself.