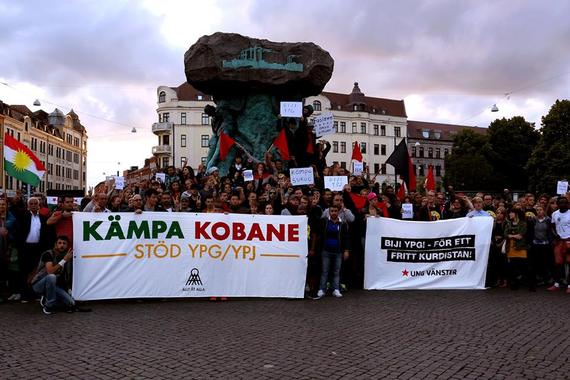 The news out of Syria, however grim, includes at least one encouraging note. In northern Syria, along the Turkish border, has emerged a de facto autonomous region known as Rojava. The enclave is engaged in a brave and for the time being successful fight for self-governance and independence against considerable odds. Many of its best soldiers fight in all-female battalions.

Meanwhile, supporters of the region's socialist-feminist ideology are working to help them with a new Indiegogo campaign. Rojava's population is roughly the same as San Francisco, and comprised of a Kurdish majority along with Arabs, Chechens, Armenians and other ethnic groups. After declaring autonomy from Syria in November 2013, Rojava established a political system built on principles of direct democracy and gender equality, and has drawn comparisons to revolutionary Catalonia in the Spanish Civil War.

Last year Rojava's armed forces, the People's Defense Units (YPG) and the Women's Defense Units (YPJ), gained international recognition for their inclusion of all-female battalions--and for being one of the most effective forces against ISIL, the militant Islamic State. In another echo of the Spanish Civil War, a sizable international brigade consisting mostly of Germans and Italians, helps defend the incipient mini-state.

Presently, the Syrian Civil War continues on, with Rojava under more or less continuous assault from fighters of the Islamic State. For Rojava's civilians, however, daily life "is normal and quiet beyond expectation," according to Turkish filmmaker Önder Çakar, in a letter he wrote from the area in July. "The biggest problem here is electricity and Internet connection. We are trying to solve this problem with power generators."

The Rojava Electricity Project, an Indiegogo crowdfunding campaign launched by Swedish socialist movement Allt åt Alla, enables anyone to support these holdouts, aiming to collect $23,000 by the end of August for the purchase and transport of replacement parts for three broken diesel generators in the town of Amuda in the eastern part of Rojava.

"The normal way of getting electricity has been cut off by ISIS," said Fredrik Näslund, a representative of Allt åt Alla, in an interview. "Now they have to rely on these old generators."

The campaign describes fixing the generators as "only a temporary solution." It's needed because of the urgency of Rojava's energy crisis. Longer term, environmental sustainability is a priority: it is one of the principles mentioned in Rojava's constitution, and community leaders are exploring renewable energy sources. Meanwhile, one of the ad hoc government's officials who had once lived in Sweden, contacted Allt åt Alla for help.

"These parts could be found in Sweden," said Näslund. "We tried to just buy them, but found that it was too expensive. So we started a fundraising campaign."

So far, the campaign has received almost $16,000 from donors around the world, primarily in Sweden, the U.S., and the U.K. Näslund confirmed that American linguist and social justice advocate Noam Chomsky is one of the contributors. Meanwhile, filmmaker Çakar also appeals for international donations to support his efforts in building a local film industry and documenting this unique struggle.

Crowdfunding support from individual donors is crucial to keeping the lights on in Rojava, since support from governments is generally lacking. The self-declared quasi-state is isolated because it occupies a politically complicated space. The YPG and YPJ are linked to the Kurdistan Workers' Party (PKK) in Turkey and Iraq, an organization considered to be a terrorist group by NATO and the European Union and recently subject to fierce assaults by Turkey that have accompanied its recent--and much belated--entry into the war against ISIL. Foreign aid, beyond military cooperation against ISIL, is unlikely. Here's more about the entire situation.

"The most important thing about the project is that it's truly a testament to how global solidarity with Rojava looks," Näslund told Techonomy. "This is not some charity, this is a horizontal solidarity project."