"It was a mistake not to see beforehand that this would be controversial," said an apparently tone-deaf Nigel Coleman, chairman of the Danville Tea Party. "The general public didn't exactly understand what we were going after."
Yeah, I wasn't sure either. You see, when you decide to burn people in effigy, as Coleman and his Tea Party cohort did a couple of weeks ago, you're likely to excite some hostile reactions from a general public that, in fact, understands exactly what you were going after. Normally, when we see effigies being burnt on the news, the people doing the burning are our sworn enemies - adherents of the Taliban, Muqtada al-Sadr, Al Queda, etc. - ululating madly in some hellish dusty backwater, or people with a truly legitimate grievance, like the Palestinians or the trance hippies at "Burning Man". Otherwise it's a practice that recalls medieval anti-semitic pogroms, extreme religious chauvinism, witch-trials and fascist rallies. In this case it was a bunch of historically-challenged suburban nitwits, who gathered over iced tea and hotdogs in a Virginia backyard to burn in effigy their local congressman and (well, who else?) all-purpose right-wing hate-figure and voodoo-doll Nancy Pelosi, described by one of the Danville Tea Party website posters as "a traitorous witch." Just another day in the Virginia suburbs... 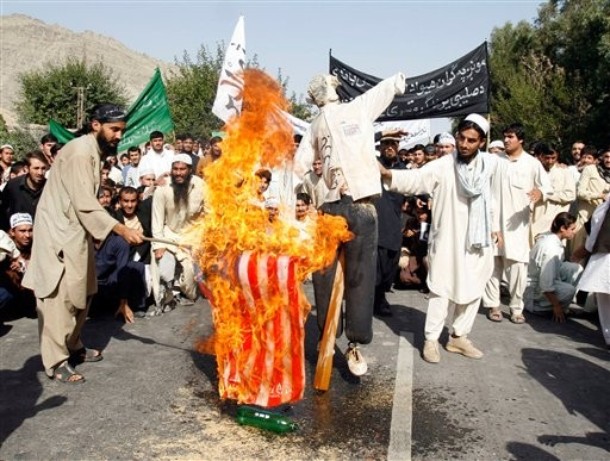 Sadly for Coleman, his host got cold feet, or perhaps recovered his sense of sanity and proportion, or just had one of those "WTF am I DOING? satori/brain-fart moments. Someone in this ridiculous episode suddenly realized there was a line he wouldn't cross. This happens all too infrequently these days, as the Beck-incited, GED-lacking hordes of Tea Partiers merrily trample every last principle of political decorum en route to their fever-dream of an untaxed, government-free Valhalla for the Virtuous.

Now don't get me wrong, A lack of manners in politics is a bracing and wonderful thing - a little upstart vulgarity often sets the power-monger and the aristocrat reeling with nausea and reaching for their smelling salts (remember the tobacco-chewing, dirty-booted hordes that Andrew Jackson permitted to grind their cheroot butts into the White House rugs? A great day for democracy! And many people in DC thought Abe Lincoln was a rough-hewn, quasi-simian hayseed - and he didn't do so badly by his country, all things considered).

But there is a line. Isn't there?

Well, there used to be a line, but now it's rapidly being erased. And burning stuff, be it effigies of living people, Beatles or Dixie Chicks records, or smutty and blasphemous books, is clearly on the other side of that line. Another poster on the Danville Tea Party site believes the practice is ratified by historical precedent. "In 1765, Patriots in Boston burned the Stamp Officer, Andrew Oliver, in effigy at the old state house in Boston...."

This was also a time when men were bought, sold, and held in a condition not unadjacent to that of livestock by other men who legally owned them, body and soul; a time when the most sophisticated medical instrument yet devised was the bloodsucking leach; when public executions were a Sunday afternoon family fete; and false teeth were made of wood. Let's bring all that back, too, shall we?

Tea Party, when not prefixed with the word "Boston", brings to most minds an image of crustless cucumber sandwiches, clotted cream, bone china and pinkies cocked daintily skywards, rather than a bunch of guys dressed as red Injuns slinging crates off an old-timey boat. Tea Party suggests etiquette and good manners, both of which the Beck-style Tea-Heads lack in spades, along with a sense of proportion, any functional knowledge of American or World history, or any familiarity with Godwin's Law.

One nanosecond of self-awareness and a familiarity with grim historical precedent would have choked the effigy idea in its cradle before these people made complete idiots of themselves. Sadly those impulses seem dead or dormant on the Right. The only place anyone there wants to be is on the other side of the line with all the nutcases, bible-bashers, Civil War reenactment societies ("boys, this time we WIN!"), Second Amendment absolutists, and dateless losers sharing the paranoid, apocalyptic worldview of Dwight K Schrute. "GOD HATES FAGS!"; "Obama has a deep-seated resentment of white people and white culture"; "Barack the Magic Negro"; packing heat at public meetings where the President is in attendance.... there's a new outrage like this every day, and every day, regrettably, our tolerance for it grows stronger. You have to wonder how long it'll be before people are taking potshots at liberals for sport, reviving the all-American Saturday-night lynch mob, or running vegetarians out of town on a rail.

And before you accuse me of harboring my own apocalyptic mindset, they were burning books for Halloween in North Carolina just last month to purge the area of "Satan's Works" which includes all non-King James versions of the Bible and Contemporary Christian and Oldies but Goldies records. Likely they were unaware of Nazi-era students' "Actions Against The Un-German Spirit" in May 1933, when 25,000 volumes of books by Jews were publicly burnt with Josef Goebbells' full-throated encouragement. The guys in North Carolina probably believe that only Stalin burnt books, just as they likely believe in their hearts Stalin was a "Czar." There's just no teaching these people.

Because, as Heinrich Heine said, "Where they have once burned books, they will in the end burn people." And not just in effigy.