Cruising is one of the greatest and best value vacation options available in the world today. You can go almost anywhere at a fraction of what it used to cost. Big ships are bringing millions of people closer together.

I remember being in New York for a TV news interview and I was going to be talking about Royal Caribbean's upcoming Freedom of the Seas, which at the time, was going to be become the world's largest cruise ship. Just before leaving my hotel for the TV studio, Royal Caribbean one-upped themselves when they announced Project Genesis which evolved into Oasis Class. Ship size when from 154,000 tons to 225,000 tons.

My initial thoughts were they should have called it Project Exodus instead of Genesis. Moving almost 10,000 people at a time was more reminiscent of an exodus. Many people enjoy cruising because of the concept of "getting away from it all." Royal Caribbean came up with a way to take everyone with you. Staying connected has become more important than ever before.

Besides shore excursions, shipboard purchases and gambling losses, communication expenses can really put a dent in any budget. In the old days, the telegraph and Pony Express were the most cost effective ways to communicate. Today, passengers can bring their cell phones, but the costs can easily mount up. Telling your kids to go play on the internet can easily cost you $45 per hour.

When a cruise ship is about 12 miles off-shore, the ship's cell tower kicks in and the fun begins. Check your phone's display as it should read "Cellular at Sea." The good news, your cell phone will cost much less than the ship's in-cabin satellite phone which can cost up to $20 per minute. If you have AT&T, Verizon or Sprint, you'll pay $2.49 per minute while the extremely special customers with T-Mobile are gouged at $6 per minute.

The new packages just launched encourage passengers to stay connected while out-at-sea. Bring and use all of the latest gadgets like laptops, cellular connected tablets like Samsung's Note 10, Apple iPads and smartphones on-board your cruise ship to communicate. I recently upgraded to Samsung's Galaxy S4 and took it for a test drive on cruises in Europe and the Caribbean. Like Samsung's commercial says, "It's the next big thing." It's super wifi capabilities, quad band processor, amazing, upgraded camera captures many captivating pictures and videos.

It's fun to immediately share experiences with family and friends back home as the excitement unfolds but it can be expensive which is why this new AT&T packages are worth checking into. Go ahead and talk, text and use data knowing exactly how much it's going to cost in advance. I enjoy sharing my photos while traveling on Twitter @CruiseGuy.

Keep in-mind, this discount program is currently ONLY for AT&T customers sailing on Royal Caribbean, Azamara Club Cruises and most Celebrity Cruises' ships for now.

Some of the best deals on using your wifi enabled devices including cell phones when cruising or travelling internationally can be found ashore. AT&T and Verizon, for example, offer generous international data roaming plans. AT&T's lead-in program starts at $30 for 120 MB of data while Verizon offers $25 for 100 MB. Sprint, well, you may want to switch to AT&T, starts at $40 for a meager 40 MB. T-Mobile is $15 per MB. Comparing at 100 MB, T-Mobile will cost you $1500. It's clear that Sprint and T-Mobile's customers don't travel much internationally by their archaic, unrealistic, 20th Century, non-competitive pricing plans.

Accessing the internet from your cell phone while ashore can save you a lot of money when cruising or travelling internationally. (Not with Sprint or T-Mobile. Leave those phones at home, in your cabin's safe or switch to AT&T.) Let's say you took a fabulous photo at Rome's Colosseum, glaciers or whales in Alaska and wanted to share with family, friends, Twitter and FaceBook. You can upload the pictures right there as well as stay current on your emails and not miss a beat.

I know every article includes swapping out SIM cards that you can buy internationally. I'm going in a different direction as I like to use my phone, number, etc. My advice is to give Google Voice a try. Signing up and getting a Google Voice phone number in any US area code is FREE. Forward your cell, home and yes, even office, if you want, to your Google Voice number. If you don't want to pay for all those "unimportant" phone calls, set preferences to ring right to voice mail. In a few minutes you'll receive an email with the voicemail transcribed (not 100% accurate, but pretty good) along with a link to listen to the message if necessary.

Think of all the calls and voicemails you won't be dinged for while travelling internationally. How many times do you see people on their phones telling their friends who called to say hi that they're out of the country and just got hit for around $2 per minute? This is a smart way to control your phone and costs and eliminate receipt of unwanted or unnecessary phone calls.

Many have tried to use Skype to make phone calls. It works, sometimes. But, yes, most cruise ships block Skype because of the large amount of bandwidth needed. MTN Satellite Communications, the internet provider on most cruise ships, created its own App, MTN Satellite Connect @Sea, that can be downloaded for free from Google Play Store or Apple's iTunes for Android and Apple phones, which is a viable low cost option to make phone calls using wifi enabled devices while cruising. It hasn't been officially launched yet, so The Cruise Guy gave you another inside tip!

One additional option, which I've also had great success with is magicJack. The new majicJack Plus doesn't need a computer to work as they too have an App that can be downloaded free from Google Play Store or Apple's iTunes to be used on Android and Apple devices. Every call to/ from majicJack to the United States is FREE! Your only cost is data.

With proper planning, you can make a big difference at reducing your international communications bill, so plan wisely. Consider the ship and land based plans offered by AT&T. They'll save you money!

I'm Stewart Chiron, The Cruise Guy, and I approve your vacation! 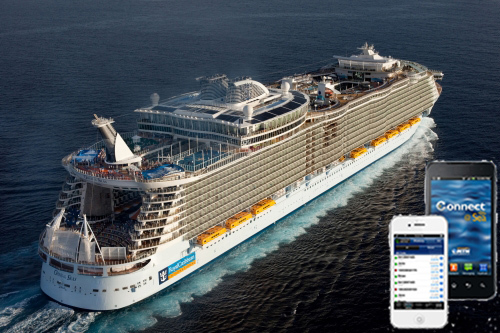