Finally, the week we'd all anticipated, Spring Break! Then, it snowed. We got a foot of the white stuff in our yard. A couple of weeks ago, there had been some teasing days of 60 degree temps, and I toyed with the idea of going camping. That was officially out. I suppose I'm still in denial that we moved to Minnesota.

A quiet and very white morning greeted us on the first day of Spring Break. I announced to the kids (after the sleepyheads slept in until 7:15) that we were gong to enjoy a staycation the entire day. Sometimes, I annoy myself by my chipper morning personality, but no worries, it dissipates after my coffee high winds down. 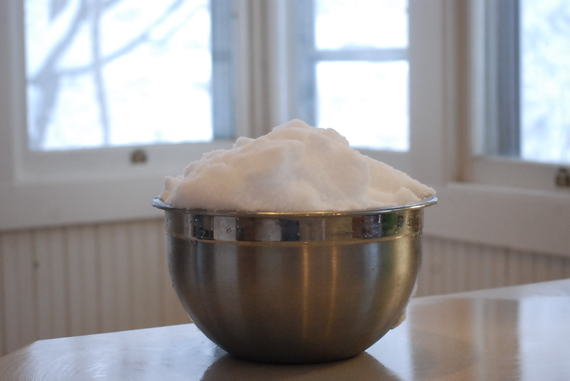 Nikolas tromped outside and gathered a big bowl of freshly fallen snow. We were making snow cream! Nikolas mentioned that if a person were starving, they could always eat snow cream to survive. Yeah sure, as long as they had vanilla, cream or milk and some sugar on hand. My kids also like to add sprinkles, which makes it gross and gritty on the teeth. 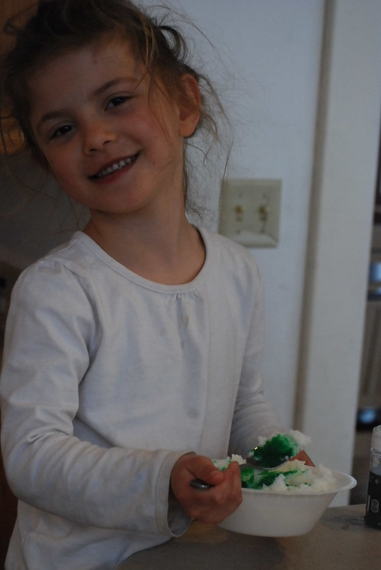 Just so you know, Katerina had eaten two spoonfuls of her Grinch explosion, and needed a fresh bowl, minus the sprinkles.

It took four minutes before Katerina was dressed to go outside, and had even zipped her jacket without help. She played alone in the backyard, sweetly singing on the swing. I rapped on the kitchen window from time to time, blowing kisses at each other.

Meanwhile, Nikolas and Elizabeth enjoyed -- rather, I enjoyed -- 30 minutes of peace while they played video games and were miraculously and momentarily jovial. 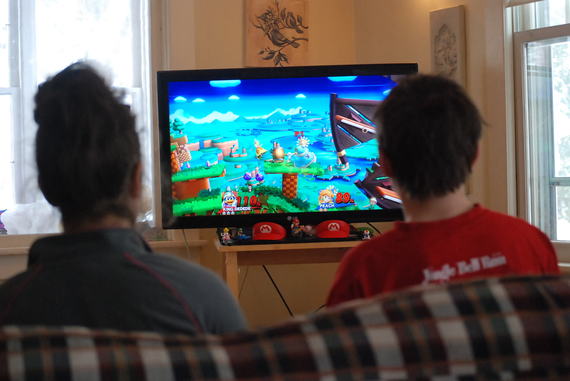 Katerina and I played farmer's market and kitchen, Nikolas practiced his yo-yo tricks (which were pretty amazing!), Elizabeth tapped some new scratches on her bedroom floor, claimed that she desperately needed to practice for her upcoming dance competition and it wasn't even 9:30 in the morning! 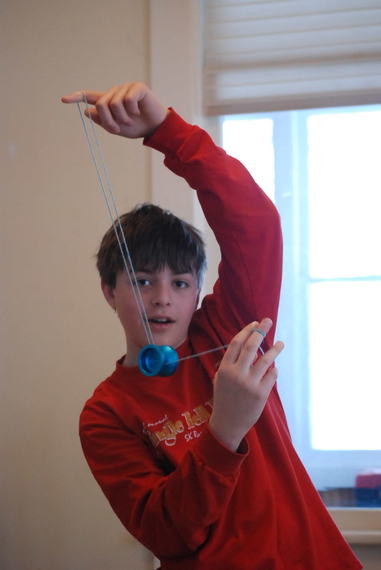 We cheered the contestants on while watching the "Price is Right," the happiest show on TV. It's also a way that I reconnect with my grandparents, who passed years ago. I well remember Grandpa Sharp, standing up and turning off the TV when Bob Barker kissed a lady, harshly saying, "You kids don't need to see that kind of garbage!" Elizabeth feigned groveling depression due to "the most depressing commercials, ever," eventually announced that she couldn't bear it any longer, and retired to her wreck of a room for more dance practice. 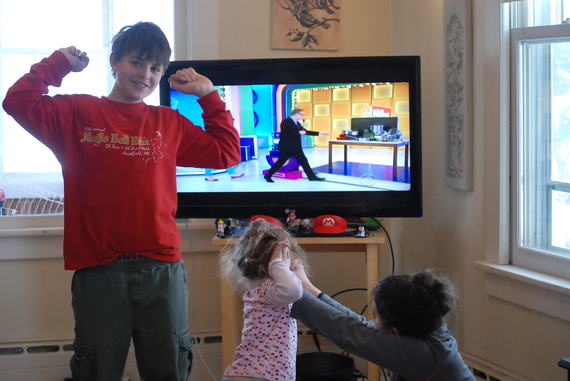 Lunch was leftovers and after, Katerina guilted me into doing a science experiment. It was pretty cool making blue elephant toothpaste. I'm just about exhausted of ideas for science experiments. Please send me some new ones if you could.

We watched "Little House on the Prairie" in the afternoon. Elizabeth claims that its chauvinistic. Yeah, perhaps, but it's mostly feel-good TV... unless it's the episode with Sybil, smallpox, or Laura's mom trying to kidnap her. During the commercial break, Katerina donned her Little House attire and made me dress up in my old-timey dress. 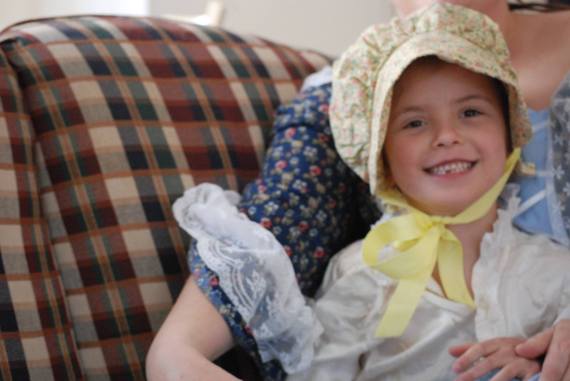 Later, we were decked out in our snow gear for some sledding. We walked over to St. Olaf Hill and half of the time was spent refereeing Elizabeth and Nikolas with their constant fighting, pushing each other in the snow and my threatening them that they'd be grounded for two weeks if they didn't stop. I thought Elizabeth was really cute how she stuck her legs out to slow down. 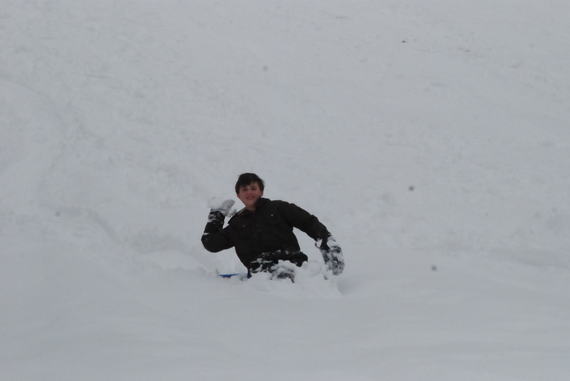 Flying down from the top of that scary hill transported me back to age 11, snow-blinded and splendidly reckless. Likewise, little Katerina showed no fear. She plopped, penguin-style, belly first on her sled and howled all the way down with sheer delight!

Soaked and bones a-thawing, I made some fresh whipped cream for proper cups of hot cocoa. Once I convinced the kids that they had received equal amounts of whipped cream, we snuggled on the couch and allowed the hot cocoa to seem inside our souls, reminding us that life is wonderful. 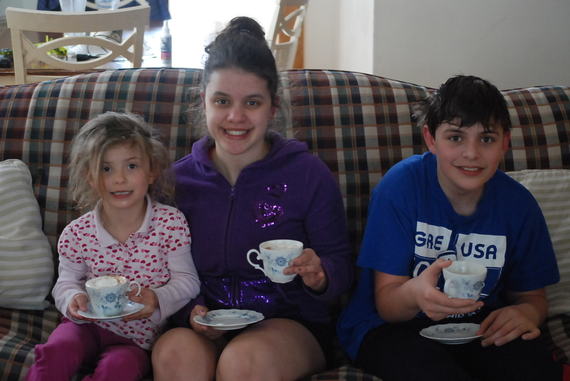 The day continued, but I needed a solid 20-minute nap. Meanwhile, Nikolas had gone back outside and built an igloo. Why would he first take a warm bath, change out of wet clothes and then head back outside? Because Nikolas is a 12-year-old boy! I did make him use the hairdryer, but I guarantee you, he'd left it damp.

The snow in MN is generally very dry, powdery. However, the temperature made for a perfect snowball throwing and fort building environment. Nikolas was very proud indeed of his igloo, said he'd sleep there once he'd decorated it with Christmas lights. He never slept in it. 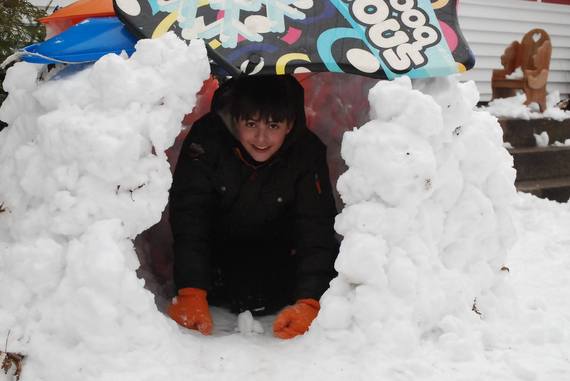 I made Greek gyro, tzatziki, cinnamon rice and tomato salad for supper, left it to cook for three hours.

Board games were next on the list, and I kept Monopoly hidden inside the far recesses of the armoire. The last time the kids played Monopoly it was a bonafide disaster, another story, altogether. 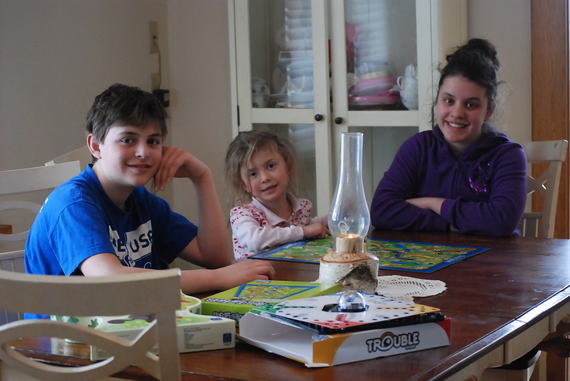 First we played Chutes and Ladders, in which Elizabeth's almost frantic need to win was disconcerting. She accused Nikolas of cheating, and wouldn't let it go until she won. Nikolas said he wasn't going to play until Elizabeth quit, and dealing with those two bickering, helped me to remember why we very rarely had game nights. I read posts on Facebook all the time and see commercials of a happy family laughing, enjoying an idyllic board game night of togetherness. Well, it just didn't pan out quite like that at our house, but hey, there were bouts of fun (I think).

Finally, our last game was Trouble. I hereby declare that Trouble is the single most annoying board game in existence. It lasted for-freaking-ever! I don't even remember who won.

Although I looked forward to the roads being cleared and getting out of the house first thing the following morning, as well as our upcoming road trip later in the week, I'd chalk our staycation as a success, with a little bit of sweetness tucked inside.

More:
ParentsFamily
Newsletter Sign Up
Raise the kind of person you'd like to know
Subscribe to our parenting newsletter.
Successfully Subscribed!
Realness delivered to your inbox