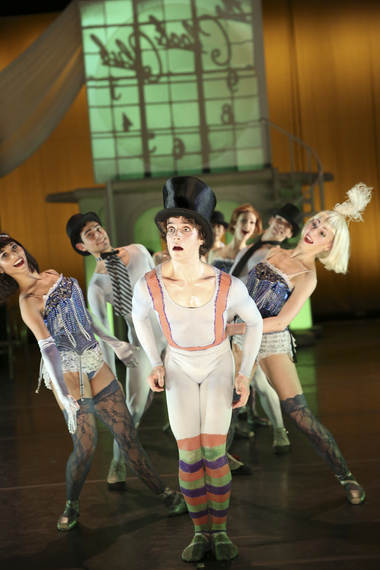 The latest production by the team of Gelsey Kirkland and Michael Chernov, this time with choreographer Akop Akopian, is called Stealing Time. Set to music of Kurt Weill, the two act ballet tells the Magrittesque story of Algae, his wife Venus, and an ambiguous character named Who. Chernov was the leading creator of this work and its chief choreographer but there were many people involved in the creative process. The stagecraft overall was pretty good, as was the costuming giving the production a nicely polished look. The simple set consisted of a clock tower with a staircase in the center rear of the stage and two scrims on either side that were used as screens for projected visual imagery. As the story unfolded, the projections on the rear and side of the stage augmented the scenes.

Erez Ben-Zion Milatin played Algae and he was a pleasure to watch. His dancing has improved tremendously over the past couple of years he has been with the Gelsey Kirkland Ballet. He looks much more flexible and his leg muscles are less bunchy giving him better line than he had before. His challenge as a dancer is the he's short and that makes it hard to match him up with a partner. Fortunately, he's plenty strong. He was able to handle overhead lifts with dancers that were considerably taller. The beauty of a dancer like him is that he has made the most of what he has been given. Less successful in this piece was Dawn Gierling who played Venus. I've seen her dance other parts very well but felt that this one didn't suit her. She seemed to be struggling with it dramatically and looked exceedingly uncomfortable navigating the stairway that led up to the clock. In the part of Who, Nina Yoshida was a strong presence and a fine dancer. I still don't know exactly what she was supposed to represent or how, precisely, she died. This seemed to me to be left vague for the audience to decide for themselves. It's not a choice I agree with as the narrative needed some clarification. I get that the images, dreams and nightmares are supposed to be complex and not necessarily explicit, and that is fair, but there is only so much that an audience can unravel during a two-hour show. 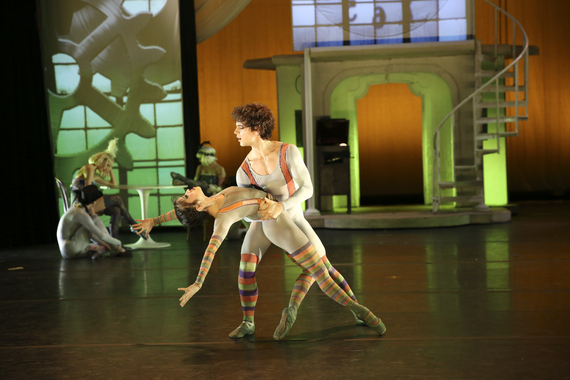 The highlight of the evening for me was Sabina Alvarez's portrayal of The Celebrity. She towered over Milatin when they danced together but it didn't seem to matter. She clearly reveled in the part of the vamp who seduces Algae. Time and again, when she took the stage she owned it. Whether it was wielding a long cigarette holder with sexy style or physically dominating Algae by stepping over him with her long legs, Alvarez was the most powerful presence on the stage. Johnny Almeida, a fine musical dancer played Guttman, the owner of the Clock Club. His character was instrumental in bringing about Algae's downfall by leading him into temptation. The rest of the company plus dancers from the Gelsey Kirkland Academy all look like they're benefiting from excellent training.

It's good news to the dance world that the Gelsey Kirkland Ballet and its Academy have survived the move from Manhattan to Brooklyn's DUMBO and they are thriving there. The young company now has 20 dancers and 6 apprentices. They look good on stage; they're well trained and rehearsed. Best of all, they now have their own home theater and it looks like they are on track for a continuing and successful future.