My parents were married in 1980, the year of the Moscow Olympics, and as a result they received a fair number of kitschy, Olympics-related wedding gifts. There was, for instance, the silverware set stamped with XXII Olympic logo -- five interconnected rings under the slender lines, curved and then jutting upward to resemble one of the towers of Moscow's Kremlin, topped by a five-point star. And then there was Misha the stuffed bear who, as an official mascot -- innocent and cheerful -- was an important public relations creation intended to divert attention away from the 65-nation boycott following the USSR's invasion of Afghanistan. What's left of the gifts? One Olympic fork that somehow ended up in our immigrant luggage when we left for the country that organized the boycott. Misha, that cheerful bear met a crueler fate under my and my sister's surgical knife (or, as it were, a pair of scissors) when we pronounced him to be, like our grandmother at the time, in need of gallbladder surgery.

My parents remember very little of the Olympics -- they were newlyweds on their honeymoon, by the Black Sea. What they do remember is the death of actor, poet, and guitar bard Vladimir Vysotsky on July 25, six days after the opening ceremony, an event that went on to be etched in the minds of so many in their generation that the line between personal and collective memory became blurred. 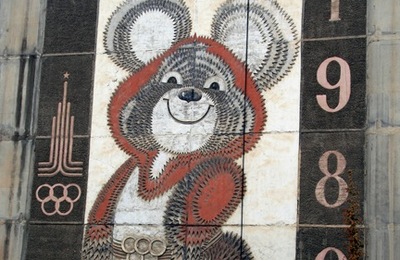 Years later, taking a course on the history of Russian theater with Vysotsky's friend and theater colleague Veniamin Smekhov, I learned more about that funeral: about the authorities' attempt to bar public attendance of the burial in a city temporarily emptied of homeless people, dissidents and many other denizens, and carefully staged for the games; and about the tens of thousands of people who turned out anyway to pay their last respects to a man who had captured the hearts and imagination of an entire generation. With Vysotsky's funeral, which in the eyes of the authorities threatened to mar the official spectacle, the Olympic games, and all their pomp and circumstance to showcase the country's achievements on the world stage, receded into the background -- the background of private loss that merged with the loss that was collective, of private joys and sorrows that survived the profusion of kitsch and slogans. My parents remember Vysotsky's death and not how well the Soviet team did or which country won the most medals.

The Moscow Olympics in 1980 took place at the height of the period referred to as "the Era of Stagnation," when signs of the country's collapse were clearly detectable, if not acknowledged, by the many cracks in its façade. Vladimir Putin, who was then beginning his KGB career, seems to have learned little from that experience. The Olympics in Sochi, which began this week, is his personal project that aims to show that Russia is back on the world stage. Conceived in the middle of the last decade at the height of his popularity when he was widely accepted as Russia's self-anointed savior, this project was worth amending Russia's constitution to enable him a third, extended term as the president, and a personal opportunity to show off his successes to world leaders in the comfort of VIP boxes at the Olympic stadium. 51 billion dollars were reportedly spent on this project of unstoppable personal ambition. The cost is higher than any other event in the history of the Olympic games, with money stolen several times over as per the custom of the state apparatus that flourished under Putin and the business elite that supports him. Yes, there is Olympic kitsch this time and there are not one but three cute cartoon animal ambassadors for the Sochi games, but it's Putin who has made himself into the 2014 Olympics' unrivalled mascot. 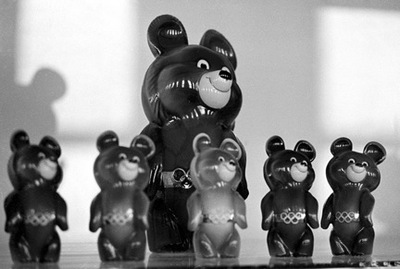 Propelled by this personal ambition, the Sochi Olympics appear to be a giant steamroller crushing so many things on its way. Residents of Sochi have been displaced from their homes and, in multiple documented cases, not been given adequate housing in return. The environmental impact is enormous due to construction in a nature reserve, a process that led to everything from the destruction of habitats for migrating birds to massively mismanaged garbage disposal. Labor practices have been unfair in a process of construction that relied on underpaid work by migrant laborers from Central Asia. Thousands of so-called volunteers -- public school teachers and other public sector employees -- were rounded up to plant trees and display patriotic enthusiasm during the multi-week Olympic flame relay through Russian cities. Russia's abuses of human rights -- particularly when it comes to a series of homophobic laws targeting the LGBTQ community and stoking the flames of anti-gay hatred across the country -- have been widely documented, leading to justified calls for international boycott.

With all this, the manipulation of personal experience and the marshaling of many lives into the display of new Russia and Putin's own prowess stands out as the biggest transgression of the Sochi Olympics. For the world's athletes, sporting achievements will be marred by being accomplished against the backdrop of multi-pronged systemic injustice. For Russia's burgeoning protest movement and the country's human rights advocates, the recognition of Russia's claim to hosting the games by much of the world community and the International Olympic Committee, will give Putin a sense that the world doesn't care enough about the suppression of human rights. For Russia's LGBTQ community, the world's insufficiently strong outcry about the climate of homophobia bolstered by talk of "traditional values," will mean continued discrimination and real physical threats.

This list goes on. In two weeks' time, the Olympic games will be over, athletes and foreign guests will depart, and Olympic kitsch will proliferate in many homes in the form of tchotchkes both useless and not. But the damage these games will have done to the lives of individuals and groups of people will take a long time to reverse.

This post is part of a series produced by The Huffington Post and PEN American Center in conjunction with the Sochi 2014 Olympics. The series is part of our Impact Sports initiative, which examines the intersection of sports and social good. The posts in the series critique the Russian government's censorship laws. Read all posts in the series here. To find out more about PEN, click here.