Michael Steele's speech at the RNC Chairman's meeting in National Harbor, Maryland, was touted as the first page of a new chapter in the GOP's history. Speaking to a crowd of fellow Republicans, the Chairman made the case that President Obama had drastically overreached in his short time in office. He argued that conservative principles were as fresh and relevant as in years past and deemed the moment right for a political resurgence.

"This change comes in a tea bag!" he declared triumphantly at one point, referencing the populist anti-tax protests that erupted several weeks ago.

But while the address was long on prophecies and proclamations, it lacked -- quite noticeably -- substance. Insisting that the "era of Republican navel gazing is over," he focused almost exclusively on defining the opposition. And when it came to actual ideas, Steele either glossed over or ignored many policy proposals that could have gone some way towards reasserting the GOP as a party of new ideas.

A search of the advanced copy of his speech reveals that Steele made no mentions of the words: terrorist, terrorism, Iraq, Afghanistan, or Social Security. 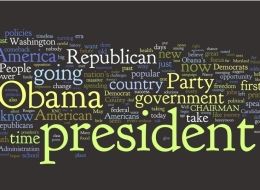 He only mentioned the word "health care" twice, both times in the context of attacking Obama. "President Obama and Democrat leaders want a brand new tax on our health care benefits and are devising a plan to give federal government bureaucrats control of our health care system," he said.

Similarly, Steele mentioned the banks just twice. Again, in both instances he was attacking the president. "Under President Obama the federal government is now in the banking business," Steele said, adding later: "While the Obama Administration is giving the banks a stress test, they are also giving the American people a tremendous amount of stress."

To be sure, the job of the RNC Chairman is that of a flame-throwing partisan. Unlike a conservative think tank scholar, Steele is specifically tasked with drawing political blood. And, on that front, he's had a semi-decent week, with good fundraising numbers and a respectable appearance on "Meet the Press." His speech on Tuesday was the type of red-meat address that may endear him to others inside the RNC that have quietly complained about his rocky tenure.

But not everyone ready to turn the page without an intellectual basis for that new chapter. Speaking on MSNBC shortly after Steele's address, former Congressman Chris Shays lamented the fact that he "didn't hear any new ideas."