Once again we turn to the cinematic mirror to see what we can learn about the human condition.

This new movie is the thought provoking and gutsy Austrian entry to this year's Oscars titled, 'Stefan Zweig: Farewell to Europe,' by the actress-turned sometimes director-screenwriter, Maria Schrader.

It was brave for Austria to claim this film, for arguably the most prestigious award in the world, because it deals with such sensitive topics.

The center of this somber and subtly nuanced biopic was the last few years of the life of a prolific internationally acclaimed writer of short stories and biographies, Stefan Zweig. His fame which expanded in the freewheeling 'anything goes' Europe of the 1920s to mid '30s came to a halt when he was thrown into exile. His books were banned by the Nazis because of Jewish themes in his work and a heritage he reluctantly acknowledged.

At the height of Stefan's career he was forced to find a new home in 1936 with his much younger severely asthmatic second wife, Lotte, who doubled as his secretary.

They found relatively safe harbor in the tropics of Brazil with its own contradictory provincial complications. This seemed to be their best option after bouncing around a bit. To his credit, Zweig (played by one of Austria's most acclaimed comedic actor Josef Hader) never stopped writing even as they trekked through the countryside and cities driven by their trusty man-Friday in a luxury car which became more beat up as the film progresses. Perhaps the car was a fitting metaphor for the couple. Like the car they carried on and even appeared to be finding a new stride. The humid warm weather suited Lotte's (played by Aenne Schwarz) health condition. Tell tale signs became increasingly apparent as despair grew in Zweig over their 6 years in exile.

Stefan's aplomb and patience diminished as he was greeted with conditions and restraints increasingly dictatorial and unappealing to his independent spirit.

Zweig was portrayed as a cool consummate gentleman despite all of this, including poor reviews from critics. He seemed pained, but amiable enough, provided with nice living quarters, surrounded by old friends and their driver who stayed with them to the end. The growing discomfort was palpable though not overbearing, or so one might think. As sales from books dried up, Zweig was incapable of earning the excellent living he had become accustomed to. Instead he was subsidized by the kindness of strangers, in exchange for currying favor from diplomats who could provide safe passage from Europe. 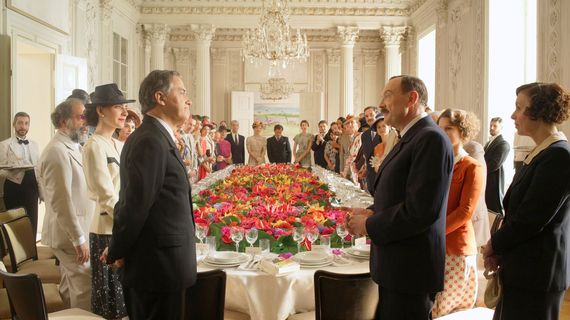 Part of the exchange was the expectation he would be trotted out like a circus act on a regular basis, expected to perform as a cultural creative and political in a way he had not experienced before being run out of his beloved birthplace.

All of this must have taken a toll on Zweig that the audience is not fully privy to until one day refugee friends, like themselves, found them fully clothed lying in bed as if they were ready for the day. Instead they were dead from self-administered poison, victims of a double suicide.

It was in 1942 and Zweig was 60 years old. Stunning as it is relevant, this film does not yet have distribution in the U.S. A big hit in Europe it is available on demand. Themes of exile and non-assimilation are as fresh today as they were 70 years ago - with a twist. One difference, Zweig's refugee status was the reverse of what is currently experienced. His journey ejected him from the height of bourgeoisie civilization, a celebrity in the first world, back to hinterlands of the colonies.

As a viewer I wanted to believe the Zweigs would make the journey from refugee to ex-pat life even the horrors of what was happening in Europe dawned on them and the pressure mounted to help people flee. Only when the film ends was this viewer certain he hid being inconsolable with the need to be more in control of his life and destiny. Perhaps if Zweig had articulated fully the extent of his distress in living an inauthentic life he could have reversed the negative effects on his emotional stability and mental well-being. After all, the Zweigs were not alone.

The Zweigs belonged to a community of survivors, and herein lies the problem: Like a spurned lover, he rejected the tribe which would have him.

Zweig had trouble embracing sympathizers and members of a religion he was born into, of an agreeable mindset and coping with similar problems. Remember he was singled out and persecuted for being a religion he appreciated for entertaining and story telling purposes only. Unfortunately, he would not allow himself the pleasure of being a member of a club that would admit him, to paraphrase a self deprecating old joke.

For me Zweig was played almost too convincingly. What remains most bothersome is the Zweigs must have left unexplored options on the table for making a new life in the United States. They could have gone to Miami, Florida, in the winter for the better weather. In New York City for fall, spring and summer, it was Zweig's first wife Friderike, a writer of note herself, who was supportive of the couple, even though it is clear Zweig cheated on her with Lotte in the lead up to their divorce.

Friderike is played masterfully by Barbara Sukowa, as she held court with her two daughters, not Zweig's biological children. She was a true woman or valor, a pillar of strength who resumed her role as a doyenne in the new world, just as she had been in Europe.

We know from history many refugees were able to reproduce and even improve upon the bourgeoisie lifestyle they left in Europe.

Perhaps if the Zweig's had a child they would have renewed their interest in life, tackled their problems and wrestled free of their pessimism. Living spaces more cramped and less luxurious in the short run, as they lost all material wealth and worldly possession in World War II, in addition to the loss of status. Crushed and abandoned, at least they had each other in the U.S. Zweig may have also been able to come to Los Angeles as others like him had done under similar circumstances. The Zweig's death of hope and imagination for a better life upsets me as I write. The whys remain a mystery to me.

The tale of Zweig's scandalous, tragic death has kept him more famous and in the public eye than his writings in recent years.

Perhaps the desire to revisit Zweig's final years raises other resonant aspects of exile without having to leave home. Quarter-lifers (the first mid-life crisis) and aging boomers alike may experience diminished support and funds for launching an adult life, staying there and leaning into the Golden Years.

Without a safety net and optimistic attitudes necessary to conjure up a plan and bereft of strategies, darkness wins over. Imagine if Zweig had our technological tools would he have found success with a pod cast and better tackled the challenges of self-employment in exile?

What separates this film about World War II was its singularity as a personal and idiosyncratic snapshot of life and death on the run.

No scenes with stars of David sewn on jackets, swastika embossed flags, vehicles and rallies with marching soldiers and tanks or starving concentration camp inmates. This information is relayed by others as first and second hand testimony, is a novel approach for this genre.

Staying focused on the details of their story lulled this viewer into yearning for a different outcome. I rooted for the Zweigs and was impressed with their pluck under pressure haunted by undeniable facts weighing on their hearts and minds. Zweig believed Europe would make a come back, yet was incapable of holding onto this vision to fruition. I would have liked to have been the Zweigs' therapist. Together with Lotte in session as well, we would have gotten to know more about all that plagued him and them.

With unfounded hope of what was not to be for the Zweigs, I tend to think of Stefan leading the band toward their dire end and Lotte in her 30s following his lead. With empathic interventions, instead of acting on his fear-fueled impulses, perhaps we would have talked through the issues and obstacles they would have been able to manage better. In any event, this was an interesting film, but not particularly easy to watch.

Disclaimer Alert: Though viewing films can reveal insights about life it is not a substitue for therapy. If you or someone you know is suicidal, do not hesitate to reach out to a professional or trusted family member or friend to get needed help.