One sunny afternoon in 1963, two very young soldiers were standing on the observation deck of the Empire State Building, 86 floors up, looking out over the greatest city in the world.

Paris may be lovelier, Los Angeles more packed with movie stars, and San Francisco has our Golden Gate; but New York City is where everything comes together, the city of nations, meeting place of Earth.

And at the pulsing heart of it, the most visited destination in the world -- Times Square. At one end of the famous square, on 7th Avenue, across from the Hard Rock Café, is a giant electronic billboard -- the famous Reuters building sign, 22 stories tall, 7,000 square feet of breaking news, like the pulse of the planet. 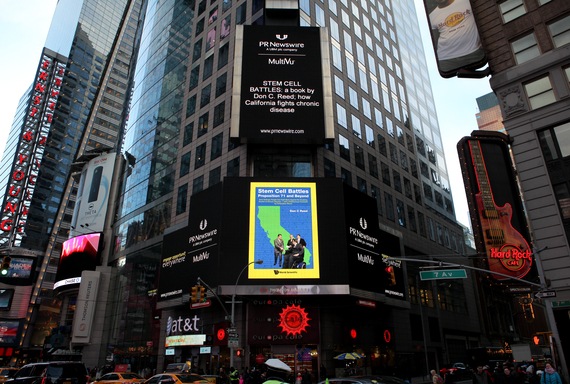 But first, back to the Empire State Building. Behind us was a security guard, leaning back in his chair, beside a door leading down into darkness.

Yes, that was the indoor fire escape, he said, and no, we could not walk down it.

But we were young and foolish, and those were innocent times. We turned left, walked all the way around the observation deck, full circle back to the guard, still leaning in his chair -- but now distracted, by a woman in a short red dress.

We ducked past the guard and ran down the metal stairs, into the echoing dark.

It is not as exciting as you might think, running down 86 flights of stairs.

The air was close and still. The walls were caked with dust.

At last we got to the ground floor-- and the exit door was stuck! My buddy, already none too thrilled by the seemingly endless flights of stairs, turned and started to go back up.

But I kept shoving the door with various parts of my body, and suddenly there was a creak as swollen wood yielded an inch.

When the door creaked out into the light, I looked at my friend and he back at me, and we both began to laugh.

Like chimney sweeps, we were covered with dust, only sweat marks making streaks of clean across our faces...

Fast forward half a century.

It's 2016, I am 70 years old, and just published a book on stem cell research: STEM CELL BATTLES: Proposition 71 and Beyond: How Ordinary People Can Fight Back Against the Crushing Burden of Chronic Disease with a posthumous foreword by Christopher Reeve.

I could hardly have picked a worse time to do it, with bookstores scarce as dinosaurs.

Fortunately, my publisher (World Scientific) is tough, dedicated and creative; you have to be, to survive in a non-book environment like today.

And the Empire State?

New York, like California, is a major supporter of stem cell research. They are doing amazing work, like the privately funded New York Stem Cell Foundation, inspired and led by Susan Solomon.

NYSCF supported two of the three most important breakthroughs in stem cell research in the past several years, including the creation of the first patient-specific stem cell lines for ALS (Lou Gehrig's disease) and the successful reprogramming of pancreatic cells. Experiments to create genetic models of types 1 and 2 diabetes, Parkinson's and Alzheimer's disease with human embryonic stem cells are underway in the NYSCF Laboratory.

The state-funded program, NYSTEM, is also terrific and deserves support. As an expert panel put it:

NYSTEM has had a tremendously positive effect on biomedical research in the state of New York, allowing researchers to make discoveries that have influenced the field of stem cell biology internationally. If NYSTEM funding ceases or declines in the next several years it will have a very negative effect on stem cell research in New York and... internationally. NYSTEM funding should be renewed when the current appropriation expires.

For me as the father of a paralyzed young man, Roman Reed, I am eternally grateful to Paul Richter, the policeman who was shot in the line of duty, but then went on to inspire a paralysis research program -- and Dr. Sally Temple, co-founder of the Neural Stem Cell Institute; and Brooke Ellison, a paralyzed woman who inspired Christopher Reeve's last movie, The Brooke Ellison Story -- and groundbreaking scientist Loren Studer, fighting for a cure of Alzheimers' and ALS. Too many to even try to name them all!

New York... a Republican Presidential candidate recently made a sneering comment about "New York values," implying there was something wrong with them. What was he mocking?

"Give me your tired, your poor, your huddled masses yearning to breathe free... send these, the homeless, tempest-tossed, to me; I lift my lamp beside the golden door." --
Emma Lazarus

The Statue of Liberty? The United Nations? The courage and caring of people working together when the Twin Towers fell?

I'll match those values against any on Earth.

And remember that billboard, on the Reuters Building?

For 13 seconds, on January 18th, 2016, I had the privilege of being a small part of New York City. Because on that Times Square sign, seven stories high, were the words:

And below it was the cover of the book: the picture of Arnold Schwarzenegger, Governor of California, shaking hands with my son Roman in his wheelchair, backed up by Bob Klein, inspiration of the California stem cell program, and me just looking happy -- easy to do, on the day when California loaned the stem cell program $150 million to get started.

That picture ran for 13 seconds on the Reuters Building sign (repeated several times throughout the day).

Don C. Reed's book, "STEM CELL BATTLES: Proposition 71 and Beyond: How Ordinary People Can Fight Back Against the Crushing Burden of Chronic Disease--with a Posthumous Foreword by Christopher Reeve", is available at Amazon.com.