Imagine if you could take living cells, load them into a printer, and squirt out a 3D tissue that could develop into a kidney or a heart. Scientists are one step closer to that reality, now that they have developed the first printer for embryonic human stem cells.

In a new study, researchers from Heriot-Watt University in Edinburgh, Scotland, have created a cell printer that spits out living embryonic stem cells. The printer was capable of printing uniform-size droplets of cells gently enough to keep the cells alive and maintain their ability to develop into different cell types. The new printing method could be used to make 3D human tissues for testing new drugs, grow organs, or ultimately print cells directly inside the body.

Human embryonic stem cells (hESCs) are obtained from human embryos and can develop into any cell type in an adult person, from brain tissue to muscle to bone. This attribute makes them ideal for use in regenerative medicine — repairing, replacing and regenerating damaged cells, tissues or organs. [Stem Cells: 5 Fascinating Findings]

In a lab dish, hESCs can be placed in a solution that contains the biological cues that tell the cells to develop into specific tissue types, a process called differentiation. The process starts with the cells forming what are called "embryoid bodies." Cell printers offer a means of producing embryoid bodies of a defined size and shape.

In the new study, the cell printer was made from a modified CNC machine (a computer-controlled machining tool) outfitted with two "bio-ink" dispensers: one containing stem cells in a nutrient-rich soup called cell medium and another containing just the medium. These embryonic stem cells were dispensed through computer-operated valves, while a microscope mounted to the printer provided a close-up view of what was being printed. 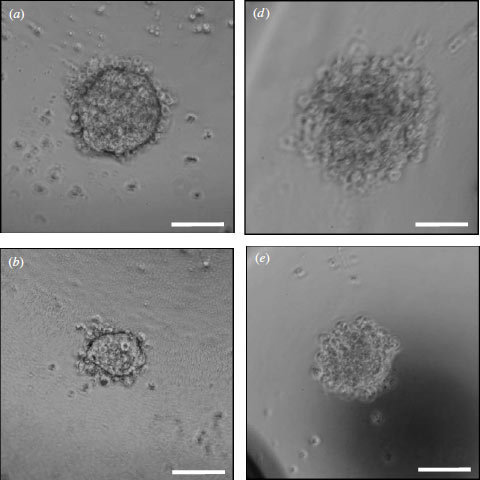 The two inks were dispensed in layers, one on top of the other to create cell droplets of varying concentration. The smallest droplets were only two nanoliters, containing roughly five cells.

The cells were printed onto a dish containing many small wells. The dish was then flipped over so the droplets now hung from them, allowing the stem cells to form clumps inside each well. (The printer lays down the cells in precisely sized droplets and in a certain pattern that is optimal for differentiation.)

Biomedical engineer Utkan Demirci, of Harvard University Medical School and Brigham and Women's Hospital, has done pioneering work in printing cells, and thinks the new study is taking it in an exciting direction. "This technology could be really good for high-throughput drug testing," Demirci told LiveScience. One can build mini-tissues from the bottom up, using a repeatable, reliable method, he said. Building whole organs is the long-term goal, Demirci said, though he cautioned that it "may be quite far from where we are today."

Correction: A previous version of this story stated that researchers from the University of Edinburgh developed the printer. In fact, they were from Heriot-Watt University in Edinburgh.