Stem cells can remain alive in human corpses for at least 17 days after death, researchers say.

Stem cells give rise to all other cells in the body, a property that makes them extraordinarily valuable in potential therapies. These potent cells are often rare, only present in small numbers in tissue samples from patients and difficult to distinguish from other cell types in many cases. As such, scientists are investigating novel ways to procure stem cells and improve the viability of the ones they can get.

Past research had suggested that stem cells could actually survive in up to 2-day-old cadavers, but researchers had thought that dead bodies would be poor homes for any cells, lacking the oxygen and nutrients the body's cells need to stay alive. Nevertheless, histologist and neuropathologist Fabrice Chrétien at the Pasteur Institute in Paris and his colleagues were curious to see how long stem cells might keep ticking after a person died.

The researchers only had access to remains 17 days old, suggesting they have not yet seen the limits that stem cells ca reach. "Maybe they can also resist longer," Chrétien told LiveScience.

The cadavers in question had been kept at 39 degrees F (4 degrees C) to keep from rotting. The stem cells the researchers isolated give rise to skeletal muscle, the kind connected to the bones, as opposed to the kind in the heart or other internal organs. [The Science of Death: 10 Tales from the Crypt & Beyond]

Apparently the stem cells were able survive in the total absence of oxygen. "These cells are so resistant to extreme and deleterious conditions that they stay alive up to 17 days after death," Chrétien said. 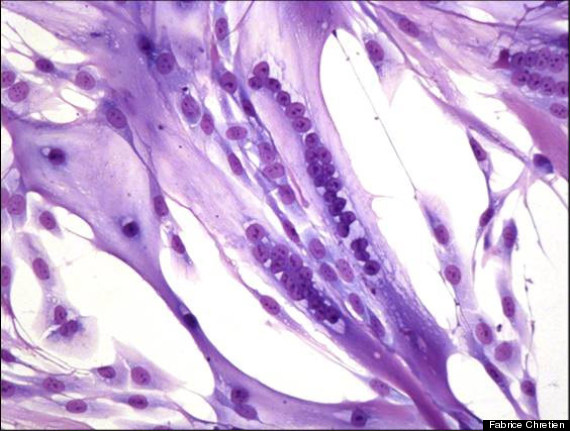 Although these findings could suggest that old cadavers could supply stem cells for therapies, "we are not saying that we will use old cadavers for treating patients," Chrétien stressed. "For clinical applications we don't have to wait so long, but just obtain cells from cadavers only a few hours after death."

These stem cells in both dead mice and human corpses were dormant when discovered, with extraordinarily reduced metabolic activity, marking the first time scientists have found that stem cells were capable of such dormancy. The researchers suspect that chemicals given off after death, or the low levels of oxygen or nutrients in corpses, or a combination of all these factors, could have sent the stem cells into dormancy, helping them survive for weeks.

A better understanding of this dormancy could help lead to new ways to keep stem cells viable for longer periods for therapeutic purposes. They could also shed light on how cells in general respond to injuries and other traumas, Chrétien said.

Chrétien, with Miria Ricchetti, Shahragim Tajbakhsh and their colleagues, detailed their findings online today (June 12) in the journal Nature Communications.