But as the technology sector continues to boom, educators have realized that this trifecta is no longer the end-all, be-all recipe for their students’ success. For today’s K-12 students, technology is a fact of life that affects everything from the way they digest information to the way they socialize.

As a result, these students will face a number of challenges as they move from the classroom into the workforce. Among other unforeseen demands, they will have to find their niche on the web, understand the interplay between biology and technology, work with data and build relationships through social media without forgetting personal contact.

According to many thought leaders, these concepts will need to be introduced early and often to ensure career success for today’s youth. That means that the role of the educator must change.

“Information transfer as the prime method of teaching is going by the wayside,” says Harbrinder Kang, a vice president for corporate social responsibility at Cisco and a spokesperson for the Networking Academy program. “All knowledge is available via the web. The responsibilities of teachers to prepare students for the 21st century is to engage, inspire and coach.”

Paul D. Miller, a multidisciplinary artist, producer and educator and author of The Imaginary App (MIT Press) adds a rapidly changing economy to this set of challenges.

“The current job market will probably be obsolete within 10 years as automation takes over more and more aspects of the modern economy,” he says. “The ‘knowledge economy’ has permeated every aspect of modern life. The classroom needs to teach [K-12] students that they are stakeholders.”

In this spirit, here are some current and potential ways that U.S. education can adapt to teach kids the critical skills they need in an ever-evolving, super-competitive job market. 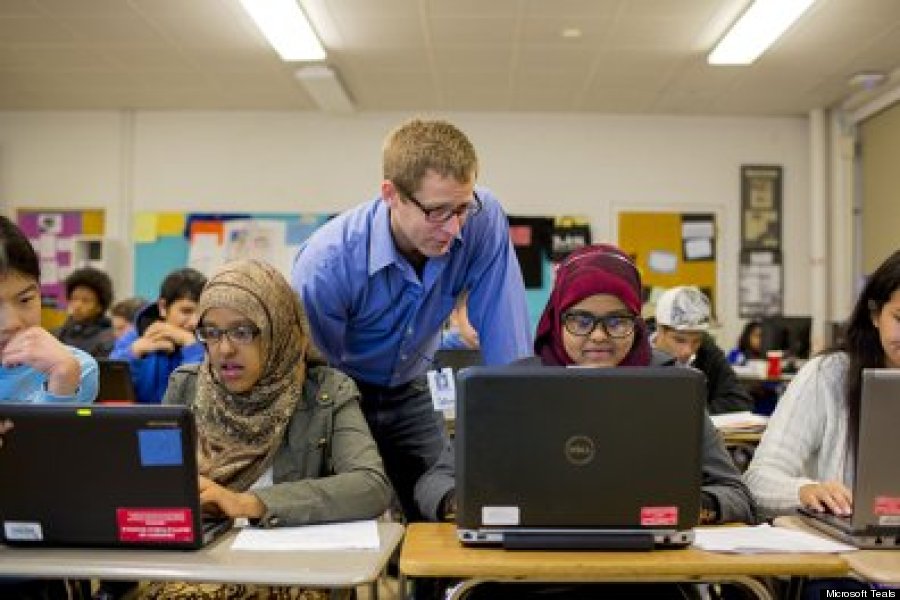 In grades K-12, boys and girls score equally well on science and math skills testing, but women move on to occupy a mere 20 percent of jobs in related fields. Furthermore, minority women represent less than 10 percent of employed scientists and engineers. Women represent half of the workforce, but they haven’t gained proportional traction in science, technology, engineering and math (STEM) fields.

This is not just a loss for budding scientists, but for our economy. After all, since women entered the workforce in the 1970s, they not only contributed thousands of dollars to average household incomes, but expanded the U.S. economy by $2 trillion.

Happily, encouraging females to pursue STEM early in life has become a government and corporate priority. Their initiatives help to boost girls’ confidence to think big -– solving world hunger big, in the case of three Irish teenagers who won the Google Science Fair Grand Prize last year. They demonstrated that bacteria could increase wheat crop yields by 74 percent, a boon for expanding our underfed populations.

How do we make sure that such accomplishments are the norm and not the exception? According to Arikia Millikan, a former editor at WIRED who coaches young women in cyber self-sufficiency via her blog, LadyBits, visible role models in math and science will motivate girls to achieve in those fields.

“Once we start to institutionalize the celebration of female scientists and technologists, we will be on the right track to making science as appealing to girls as it is to boys so that we can further scientific progress as a society,” she says.

In a recent interview with HuffPost, Dame Sue Ion, a Royal Academy of Engineering chair, also posited a few ways to attract girls to STEM at an early age.

First, she said, we must dismantle “old-fashioned perceptions” about what engineering actually is. “Engineering can be about creating a cancer-busting ultrasonic to deliver drugs to tumors; it can be about developing bionic limbs; it can be optical fibers … It's an art and it's creative,” she said. “But it also deals with devices and everything that makes the world tick in the 21st century.”

While she called it a “gross generalization,” she suggested that girls are attracted to scientific applications with a medical or environmental benefit stuff that improves the environment […] If you use these things to get girls attracted at a younger age … that might be helpful,” she says.

Here is a list of effective ways to talk your kids into loving STEM.

Cisco's Networking Academy is a partnership with schools, universities and other institutions in 170 countries that teaches people how design, build and manage technology networks.

Three quarters of kids in the U.S. use a smart device, and their time spent on a cell phone screen has doubled since 2011. Only 5 percent of U.S high schools, however, offer Advanced Placement computer science (CS) classes.

Coding is the language of the future, and programs like CodeAcademy, Code.Org, and others are picking up the slack to turn kids from consumers into creators. Programs like Cisco Networking Academy also partner with schools to supplement computer science and technology programs. By combining soft-skills training with more specialized, technical training, they aim to train high school students for highly rewarding, in-demand computer networking jobs.

Similarly, Microsoft’s volunteer TEALS (Technology Education and Literacy in Schools) program pairs computer science professionals as mentors to educators teaching computer classes. The two teach tandem until the educator becomes a CS expert. Demand for the program is high: Since 2009, TEALS has grown from one volunteer in a single school to deploying nearly 500 volunteers teaching 6,600 kids in 131 schools across the U.S.

These supplemental programs produce real results. Students suddenly gain interest in careers they might never have considered otherwise, and they gain tangible, technical skills. Nathaniel Boggs, a Networking Academy alum from Indiana, realized he had a leg up once he got to college: “I found myself in computer science classes with students who had no high school preparation for the material,” he says. “The way technology is shaping our world, kids should have this kind of education earlier.”

“It’s a big problem when one of the biggest drivers of the U.S. technology is computer science, and there are no kids studying it at the high school level,” echoes Kevin Wang, founder of TEALS. “CS is actually viewed somewhere between art practice and art history, but you need it to be successful in any field in the future. Any computational thinking will get kids ahead.”

Even if students don’t decide to pursue a career in tech right away, a seed planted early in life may cause a career turnaround -- just in time for a growing demand for science and design jobs. Danielle Sipple, 32, a writer studying for a degree in chemical engineering, is a great example of this phenomenon.

“I was introduced to little bits of STEM education through an accelerated learning program I was invited into,” she says. “There is so much emphasis on the social sciences like sociology and psychology but without the hardcore development of skill sets in STEM, specifically chemistry, engineering, mathematics and physics, there will be huge gaps in the job economy.”

To bring up an earlier point, bringing science into the classroom helps students realize the sheer possibilities that are available to them.

Turn Up the STEAM

What is STEAM? from Brown SPS on Vimeo.

The greatest contributions to knowledge have come from thinkers who forgot the distinction between science and art. Today, leading learning centers like the Rhode Island School of Design (RISD) want to fortify STEM subjects with arts and design emphasis (STEAM), which Kang says are critical to innovation and engagement.

Arts and design – the ability to emotionalize and conceptualize information in a personal way – is what brings data to life. RISD’s STEAM students have made breakthroughs in treating Ebola, fortifying indigenous mud houses, and making electric vehicles more compact, because they looked at the world through the lens of preserving its beauty while imagining ways to improve people’s lives.

“Common core standards are all about sophisticated skills that kids need to master to be college and career ready: networking, collaboration, speaking, listening and synthesizing solutions,” says Moran.

“We’re all supposed to be data junkies,” he continues. “Now how do you sell that data? The humanities make us human, and the human voice is an important piece of technology.”

“These people are equally likely to draw inspiration from an obscure piece of scientific research, a 19th century poet or counterpoint music theory,” says Julia Kagansky, director of NEW INC., the New Museum’s technology and design incubator. “They don’t identify as purely left or right brain -– in fact, they dismiss that binary notion all together –- and instead attempt to fuse code and art, science and fashion, engineering and design in their practice.”

“We looked for peer thinkers and great storytellers with a certain edge and interesting life stories, combined with disciplined and strategic thinking,” he says.

Unfortunately, he has observed a decline in basic communications skills – manners, table skills, and eye contact – among colleagues, which inhibits true collaboration that feeds on communication.

“Business etiquette is lacking in the modern workplace,” Hayes says of meetings where even senior executives sit fiddling on their phones. “It creates a mental and physical barrier with the people you’re working with to create solutions.”

Just like artful design has become indispensable to the economy, says Kang, collaboration and personal interaction have become emblematic of the millennial mindset.

“Our students have a desire to give back and build a pillar of social entrepreneurship, which taps into millennials’ motivations and desires,” says Kang. Emphasizing collaboration in school, through work that stirs imaginations, is a sure way to overcome shortening attention spans.

Millikan of LadyBits worries that creativity is being stamped out of the classroom. One middle school teacher’s willingness to immerse students in nature inspired Millikan to embark on an accelerated science track because she “could not stop consuming science knowledge and wanted to carve out a spot ahead of the rest of my peers so [she] could ensure a lifelong career in science and engineering.”

Today, imaginations must thrive, and minds must meet, for kids to grow up in -- and create -- a progressive world. By bringing technology to life in the classroom for all, marrying it with the humanities (STEAM), and demolishing the standardized transfer of facts that is the hallmark of traditional K-12 education, we can truly prepare this generation for a bright future.