The Billion Oyster Project serves students, community and New York Harbor. Be part of the conversation at Pace University (more below).

"How does a city of this magnitude bring young students to the water, and have them feel a sense of ownership and community?" asks Professor Lauren Birney from her lower Manhattan office at Pace University's School of Education.

A century ago, the oyster was New York's pearl. Oystering was as integral to New York Harbor's identity as the Statue of Liberty. The waters of the city and New Jersey boasted more than 260,000 acres of oyster beds spread throughout the harbor, its bays and estuaries, the lower Hudson and East rivers. New Yorkers ate more oyster meat than beef. The original New York "foot-longs" were Gowanus oysters, gathered from Gowanus Bay and Creek in Brooklyn and exported to Europe as a delicacy.

In present day New York, oysters are better associated with the Oyster Bar in the cellar of New York's Grand Central Terminal, where oysters from Apalachicola Bay in Florida and Chincoteague Bay in Maryland are now the delicacy. Generations of pollution drove out New York oystering, and the name "Gowanus" is identified less with the bay and more with the canal, a toxic, Federal Superfund site (hopefully on its way to a major cleanup).

But the Billion Oyster Project aims to change all that by enlisting hundreds of thousands of city school children to restore a billion oysters to city waters. "In short, students are driving the restoration of New York Harbor," said Birney. 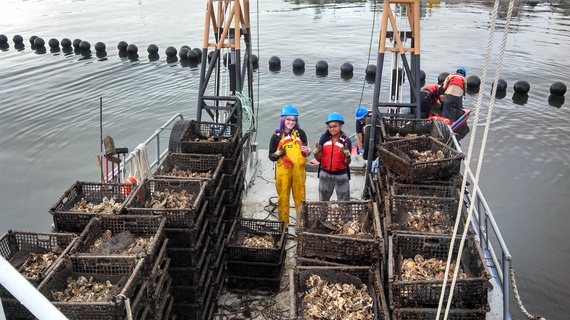 With a $5M grant from the National Science Foundation Birney is co-leading a powerhouse group of collaborators to build upon the Billion Oyster Project and target "middle-school students in low-income neighborhoods with high populations of English language learners and students from groups underrepresented in STEM fields [Science, Technology, Engineering and Math] and education pathways."

In addition to the students' hands-on work constructing reefs, growing and planting oysters, maintaining boats and operating monitoring equipment, Birney says the new funding opens up the world of STEM.:

The harbor is like a living laboratory for education in STEM. We want to give students the opportunity to learn outside the school building. Our consortium of partners is creating opportunities for citizen science, real-time data collection, operation of monitoring technologies, and more.

After-school mentoring provides extra enrichment for those students especially interested in STEM. Maybe a student gets excited about oysters or the condition of the harbor and decides to be a biologist, or pursue an interest in maritime law. An interest in our monitoring technologies could open a door to the study of engineering. These experiences are such a rarity for our students they may otherwise not have the opportunity to discover their passion.

The collaborating organizations are as blue-ribbon a list of partners as one can dream up. Along with Pace University School of Education and the New York Harbor Foundation: New York City Department of Education, Columbia's Lamont Doherty Earth Observatory, New York Academy of Sciences, Good Shepherd Services, University of Maryland Center for Environmental Science,Wildlife Conservation Society's New York Aquarium, and The River Project

Theoretically, if we have a standing population of one billion oysters, the harbor would be completely filtered every three days.

The Billion Oyster Project not only empowers students to build a new future for their community, it enables them to connect their present to their past, while reflecting upon, and redeeming, the unwitting misdeeds of prior generations.

As I discussed this with my Pace colleague Lauren Birney, I was reminded of the teachings of Ernest L. Boyer, the great American educator and adviser to three presidents. He wrote in Hope for Today's Universities:

While we are all nonuniform and while we differ dramatically from each other, the simple truth is that all the people on the planet have the marvelous capacity to place themselves in time and space. We can recall the past and anticipate the future. And yet, how often we squander this truly awesome capacity to look in both directions, even neglecting our own roots.

A paragraph later comes his most enduring quote -- his simple solution to that intergenerational dilemma, a central tenet of his theory of education taught him by his grandfather who devoted his life to underserved communities:

To be truly human, one must serve.

Ultimately, the Billion Oyster Project is about service: to the environment, to school children, to a city that lost its environmental way, to those of a long-gone generation who knew not what they were losing, even as it slipped through their fingers.

If you would like to be part of this brilliant, groundbreaking effort, join Professor Birney and John Forest Dohlin, director of the New York Aquarium on October 27: 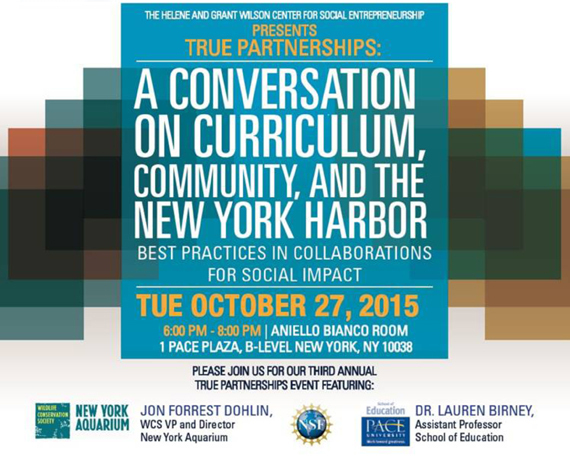