It's been less than two weeks since the ballots were cast and the electoral votes determined in the presidential election. With seemingly uncannily successful predictions from Nate Silver and Josh Putnam, considerable post-election analysis has focused on the role of mathematics in political science and polling. One should keep in mind, in all such discussions, that keeping an objective, precise view of mathematical content can be difficult. Mathematicians often step carefully and even warily from one logical statement to the next. One misstep can lead to inaccuracy. For example, what fallacy leads to the following claim that 0 = 1?

Look carefully, else you'll convince yourself that 1 = 0.

Personal bias can influence one's interpretation of data. This may not even be intentional. To aid in seeing this, watch the following video, and let's see if you can accurately count the number of tosses of the ball between the players wearing white. Focus, else you can miscount.

Did you do it? If not, it may depend, in part, where you place your attention.

Our minds can also interpret information inaccurately. This can, if not carefully checked, also lead to false insights. To get a sense of this visually, let's start with two simple shapes seen below.

Now, we line them up as shown below.

Easy enough. But, now, we place the stripes in a pattern. Are they straight? 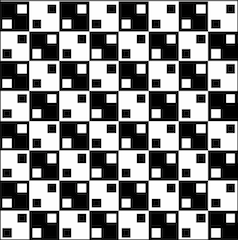 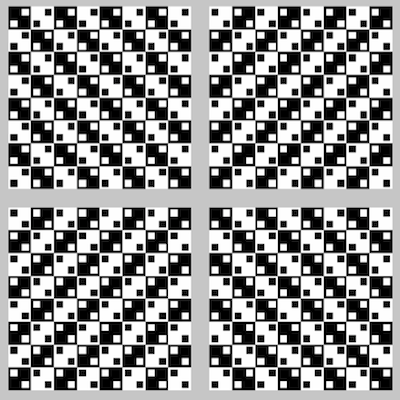 Mathematical analysis takes a careful balance of seeing the forest in spite of the trees. That is, accuracy can come by focusing on the details while also understanding how such minutia creates the larger picture. So, beware your assumptions or those professed by others as they use mathematical analysis. If you can walk that careful line and keep accuracy, you may produce results like those on the FiveThirtyEight and FrontloadingHQ blogs; that's a silver lining in a journey that can hazed by many clouds.

Spoiler Alert: If you got stuck and want a hint on what went wrong on the steps that led to 1 equalling 0, look for the line where the square root is taken of both sides. Remember, the square root of a number can equal a positive or a negative number. In this case, one side would lead to a positive root and the other to a negative. Assuming otherwise leads to 0 equaling 1.

Acknowledgement: While the author created the images in the article, he followed the steps and patterns in Trick Eyes: Magical Illusions That Will Activate the Brain by Akiyoshi Kitaoka. This book shows how to create your own optical illusions along with displaying a large selection of illusions.