Is Stephen Sondheim's Sweeney Todd an opera - or what? The work has been around for thirty-six years and known all around the world - challenging labels, accommodating professional and academic venues, always a kaleidoscope of actors who sing and singers who act. San Francisco Opera presents Sweeney Todd now through September 29. Says David Gockley, General Director of San Francisco Opera, "Sweeney Todd is a piece of genius that deserves the kind of operatic treatment we can give it." Baritone Brian Mulligan sings the title role and mezzo-soprano Stephanie Blythe is Mrs. Lovett. Its cast of internationally recognized classical artists includes Heidi Stober (Johanna), Elliot Madore (Anthony), David Curry (Adolfo Pirelli), Matthew Grills (Tobias), Wayne Tigges (Judge Turpin), Elizabeth Futral (Beggar Woman), and AJ Glueckert (Beadle Bamford). The gritty inhabitants of Fleet Street are fleshed-out by the ultimately versatile SF Opera Chorus (the secret ingredients of Mrs. Lovett's juicy meat pies). "For me," said Stephanie Blythe, "Sweeney Todd is a musical. What's really wonderful about this show, is that it's a phenomenal ensemble experience." 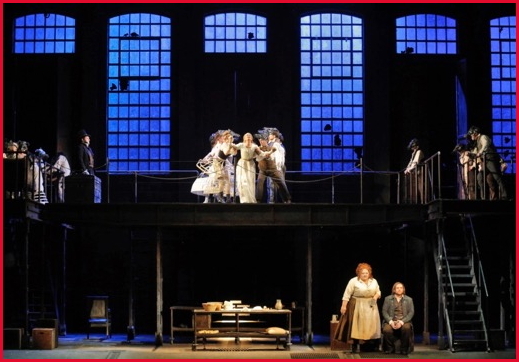 "Everyone here tiptoes around the definition of this piece. It's an entertainment - that makes you think! It examines the darker side of humanity. There are so many really true operatic moments - but there is far too much spoken dialogue for it to be considered an opera. The book is way too thick. You could probably get four operas out of this piece. I've wanted to do it for a very long time. I was asked by a company that was going to put it on, but then it didn't happen. About ten years ago I appeared on a cover of Opera News with Patti LuPone. The story was about opera singers and their dream musical theatre roles and musical theatre singers and their dream opera roles. I was dressed as Mrs. Lovett and Patti was dressed as Jenny from Mahagony. Even in college, I listened to the original cast recording a million times and fell in love with Len Cariou. It was a lesson listening to him sing."

Stephanie Blythe's recent recording, As Long As There Are Songs, produced at Meyer Sound in Berkeley, California, is likewise a grand entertainment and the first CD to demonstrate the company's innovative recording system, Constellation. Together with long-time piano accompanist, Craig Terry, the collection is a celebration of great American songwriting and an homage to one of the most popular singers of the 20th century, Kate Smith. I told Stephanie that three of my favorite tracks - Serenade In Blue, The Thrill Is Gone, and Wrap Your Troubles In Dreams - gave me a hint of what I might expect in her vocal delivery as "Mrs. Lovett". 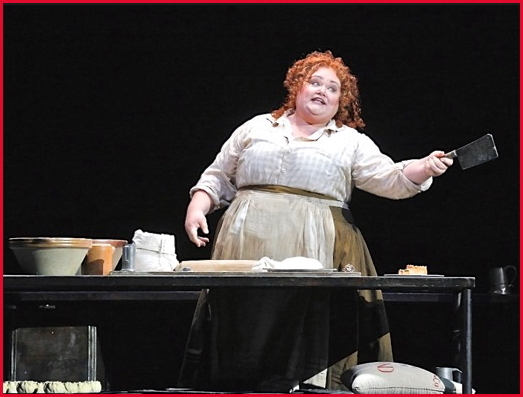 "This character has a huge palette of color and emotion. She goes from being giddy as a school girl to being a villain. Because of the numbers, By the Sea and Have a Little Priest, we forget that she is the villain of the piece. It's her idea to start eating people and to make money from it. She is willing to do just about anything to get what she wants - and that is to be married to the man she has been attracted to for a very long time. That desire is coupled with the passion of being a business woman - someone who has taken care of herself for at least seventeen years now. She is in a failing business and desperate to save it. She sees that she's killing two birds with one stone in this experience. It's wonderful to be able to play layers of character. I've had an enormously exciting time working with the director, Lee Blakeley. He really understands how to talk to actors. And he treats us all as such. If you want opera singers to be actors, then you have to treat them like actors. That is what I'm taking away from this opportunity. I've been given some truly amazing advice. As someone who works with young singers, I think I will come away with some new ways of speaking and of formulating ideas that I didn't have before. For me, that is the real cream of this experience." 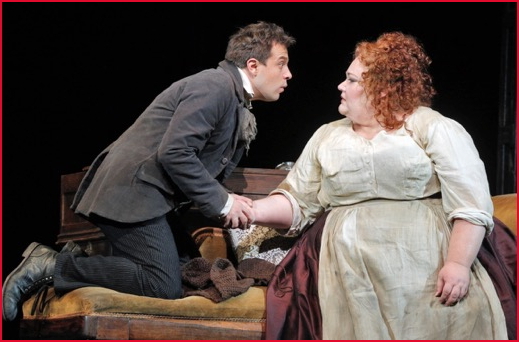 On Sunday, October 4 at 7:30 pm, Bay Area Cabaret opens its 2015-16 Season at the Fairmont Hotel with Stephanie Blythe in the fabulous Venetian Room. She will present her much-acclaimed show, We'll Meet Again: The Songs of Kate Smith. Her set list will include songs featured on the CD along with other major hits from Kate's glorious career including When the Moon Coves Over the Mountain, Bei Mir Bist Du Schoen, The White Cliffs of Dover, and This Is All I Ask.

"Kate Smith had an extraordinarily high belt voice and she was entirely un-trained. The voice itself is a miracle, a completely natural voice. What she did with her life and her voice - that's the legacy. I was studying at Tanglewood in 1993-94 when I started listening to her. I had the CD, Kate Smith, 16 Most Requested Songs. I couldn't believe what I was hearing. I remember having that wonderful kind of feeling when you realize you're connecting with something from a long time ago. This was the music I listened to at my grandfather's house! I always open my show talking about that. All my love for this particular music comes from my grandfather. When I mention Kate Smith to a young singer - and I get a blank stare because they don't know who I'm talking about - I feel as much pain as when I mention opera singers such as Lucine Amara or Beniamino Gigli or Dietrich Fischer-Dieskau. If you say one of these names and they ask, "Who's that?" - you just want to die! For me, it's the same feeling if they don't know Vera Lynn or Kay Starr - these wonderful vocalists who were truly one of a kind. This was a time in entertainment where authenticity was something people sought out." 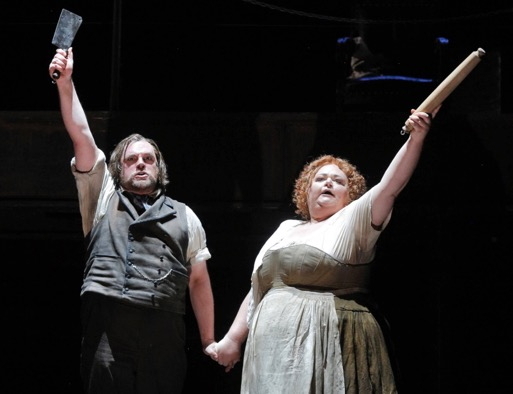 "I'm a classically trained singer, but I also grew up with a father who was a jazz musician. I've listened to lots of different music my whole life. But, in all honesty, my heart is connected to American music - the art songs, popular songs, musical theatre. I adore opera and I love singing it. The music is rapturous, exciting, and wonderful. It's a challenge - brilliant and fabulous. Everyone has something in their life that gets their motor racing. This is what gets my motor racing!"

Click here to stay in touch with Stephanie Blythe.