Since she started filming the second season of USA's hot-buzz hit Mr. Robot, Stephanie Corneliussen has been on a sporadic apology tour.

Seems that sometimes when she's hanging out with her real-life friends, she brings along her character from the show, Joanna Wellick. 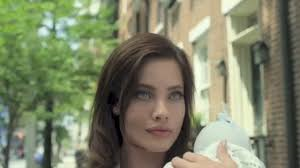 That might sound cool to fans of Mr. Robot, which returns Wednesday at 10 p.m. ET.

"Joanna is a strong female character and I love playing her," says Corneliussen. "But one of the things about her is that she always says exactly what she's thinking. 'If you've done anything to him,' she'll say, 'I'll kill you.'

"She can do that because she's in complete control of everything that comes out of her mouth. She knows every word will be just what she means.

"I'm not like that. With me, I'll have a discussion or an argument and five minutes after it's over, I'll realize what I should have said.

"I have to think about what I say. So one night recently I was with friends and I was in this weird state of mind where I started saying all these snarky things. It was like Joanna was talking. I had to apologize."

And then there's the staring.

"One of the other things about Joanna," says Corneliussen, "is that she has a tendency to maintain eye contact and not blink. It's creepy, and sometimes when we're not filming I keep doing it.

"I was out with a friend and she was telling me something when she suddenly said, 'Dude, stop staring at me.' And I realized that's what I'd been doing. I looked at her arms and the hairs were standing up."

When filming for a season ends, Corneliussen says, "I try to push Joanna out of my mind." She was so successful in that effort after season one that when season two filming started, "I had a hard time getting her back. I kept looking for her and then one day it was like she exploded inside my head."

So who is this character with such a powerful grip? 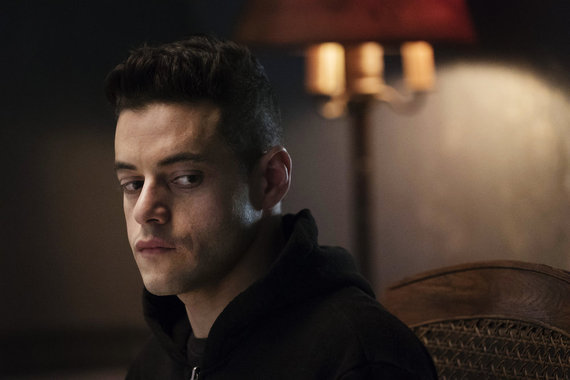 E Corp is the massive, mysteriously and seemingly evil tech conglomerate that the show's sort-of hero, Elliot Alderson (Rami Malek) (above), helps to cripple by crashing its computer system. The idea is that this will render billions of dollars in debts uncollectable.

When we first met Joanna, Corneliussen notes, she seemed to be a standard-issue E Corp wife.

"Tyrell grabs her face and tells her he's going out," she recalls. "It's a very dominating power move, as if she's now supposed to do her nails or whatever corporate wives do.

"But 10 minutes later he's tied up in bondage, and it's clear she may be the one wearing the pants in this relationship."

Those sorts of twists make Joanna a strong character who Corneliussen says is "absolutely fun" to play, though the fun does not extend to Joanna going for laughs.

"We just shot one scene where Joanna has a line that could be very funny," Corneliussen says. "Depending on how she says it. So I looked over at [creator] Sam [Esmail] and I said, should I do it that way?

Corneliussen calls her own personality somewhat less serious, though that doesn't means she avoids hard work.

Born in Copenhagen, she studied ballet and has a degree in graphic design. At 13 she was recruited into a modeling career that put her into magazines like GQ and Vanity Fair and into ads for products like Armani. 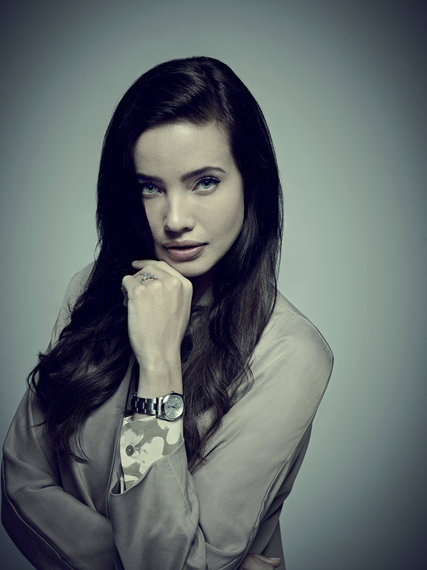 Modeling was never her goal, though, she says. "I just fell into modeling. I'd always wanted to be an actress, and this show has given me the opportunity to prove I can actually act."

She impressed Esmail and co-creator Chad Hamilton. Joanna was originally scheduled for a five-episode run, but after the fourth episode was filmed, Corneliussen got a call saying she'd stay a while. For the coming season she's been promoted to series regular.

Among other things, this puts her deeper into the show's social media conversation.

"I love talking with fans," she says. "One of the goals of the show is to make people think, to get them to react, and social media is a place where everyone can interact immediately. It brings people together."

As for Joanna, Corneliussen says there are times when "I'd like to be a little more like her - to have that confidence and know exactly what I want."

Goals she does have include ruling the world.

That thought stuck, apparently, though Corneliussen modified it slightly.

"It's better to be queen than king," she says. "I think I really want to be empress."