To reality TV fans, Stephanie Izard is the frizzy-haired winner of "Top Chef" season four. But to Chicago food lovers, she's owner of some of the city's best restaurants, including the universally acclaimed Girl and the Goat, which won her the James Beard Foundation award for Best Chef in the Great Lakes region last year.

Girl and the Goat is best known for hearty meat dishes like wood-oven-roasted pig face and goat empanada. But Izard says that when she's having friends over to her house for a dinner party, she prefers to serve them fish. Specifically, her go-to dinner party entree is whole fish baked in a salt crust.

"What I really love about it is that when you bring it to the table, still in the salt, it looks really dramatic," she said over the phone. "When you crack open the crust, and reveal the perfectly-cooked fish underneath, the whole table inevitably gasps with delight."

Other people had told me before that salt-baking was a great way to cook fish -- which is generally a pretty hard thing to make at home. But for some reason, I never believed them. I always thought salt-baking sounded difficult and time-intensive, and that I would end up with something too salty to enjoy. I presented Izard with all these objections, but she insisted I was mistaken.

Izard walked me through every step of the process over the phone, but I remained dubious until I did it in my own kitchen. And then? Presto. I was a convert. It's truly an excellent technique. Easy, quick and reliable. I cooked a whole (gutted and scaled) branzino, which feeds two, in less than an hour, and the flesh was as firm and moist as I would expect it to be at a serious seafood restaurant. One fish cooked this way would be a simple main course any night of the week, and several cooked this way would make be the perfect entree for a medium-sized dinner party. Here's how to do it yourself.

If you're thinking of making salt-baked whole fish, you probably know how to separate an egg. If not, here's one method.

As you can see in this gif, I didn't measure the salt very precisely. The exact ratio is not crucial -- and the amount you'll need will depend on the number and size of the fish you're baking. It would be fine to use coarse sea salt rather than kosher salt, but plain iodized salt wouldn't be ideal.

Once the egg white and salt are fully integrated, it should easily hold a shape that you craft with your fingers. If it's too dry, add another egg white. If it's too wet, add some more salt. Neither of these are expensive ingredients, so it's probably better to err on the side of having too much than too little.

"If you want to add some extra flavor and aroma, you could add some herbs or spices or a bit of a flavorful sauce," Izard said. "It won't make a huge difference in the flavor, but it might look nice."

I used some thyme, because that felt right for branzino, but I am not completely sure I could taste it at the end.

You should pour in enough salt to make a base several inches bigger on each side than your fish, at least half an inch thick. If you're cooking multiple fish at once, scale it up accordingly.

You want to be sure that none of the fish is visible once you cover it with salt. If you run out of salt before you've completely covered it, just make a little more -- that happened to me, so don't sweat it. Make sure to pat the salt crust down until it's fairly smooth. At the end, your fish should look something like this: 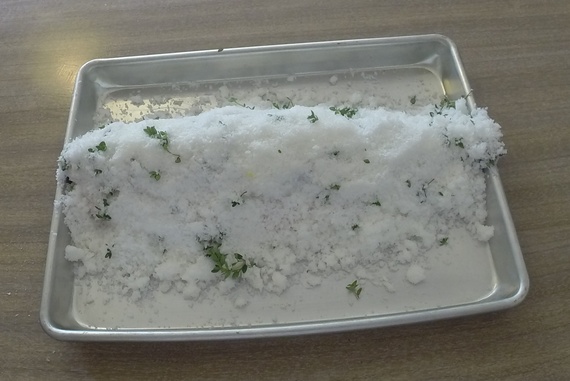 Bake the fish at 375 degrees for about 20 minutes. "You'll know it's done when the crust is completely dry and just starting to brown on top," Izard said. If you're nervous about eating undercooked fish, you can stick a small, needle-based instant read thermometer into the salt crust to check the temperature of the fish. If you're serving this at a dinner party, as Izard does, you might want to bring the fish out to table still in the crust, and do the last few stages in front of your guests.

If you strike hard a few times, rather than striking gently a bunch of times, you're more likely to crack the crust into large pieces that are easy to peel off.

This part is weirdly fun, if you've done everything right. It's like opening up a present to yourself!

You should brush any excess salt off the skin before eating it. But basically, you're done! Maybe drizzle a little olive oil on top if you're feeling like a splash of luxury? Here's what you should have at the end:

Chef Shortcuts is a new weekly cooking series on HuffPost Taste in which I ask some of the world's best chefs to share one great tip, one cooking technique they've learned in all their years in professional kitchens. Then, I'll test them out at home! The idea is to discover shortcuts that will help you create restaurant-worthy dishes every night of the week. Chef Shortcuts will appear on HuffPost Taste every week.