Colbert donned a reddish-orange racing suit Sunday and went on a ride with U.S. bobsled driver Steven Holcomb. He was in the black sled that Holcomb had just driven to the four-man World Cup gold medal at Mount Van Hoevenberg.

With the crowd at the finish line chanting his name, Colbert hopped into the third slot normally manned by Steve Mesler and tucked in tight between Justin Olsen and brakeman Curtis Tomasevicz. About a minute later, Colbert emerged unscathed but breathing hard.

"Having won today's competition, you are today the fastest in the world at this," Colbert said to Holcomb and his team. "I had to pick the fastest team. Thank you. It felt like I was being hit in the head with ice hammers. It was like losing the worst snowball fight of your life." 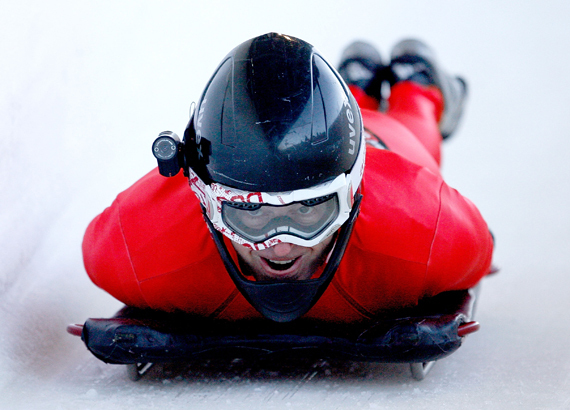 Colbert said he looked up for only the first four turns on the way down the 20-turn layout, then buried his head in Olsen's back for the quick ride to the bottom.

"Oh, my gosh! That was the ride of my life," said Colbert, who is urging his viewers to support the U.S. Olympic speedskating team. "I've ridden with the Thunderbirds. They have nothing on you."

"I was just trying to make it down, make a safe run," Holcomb said. "It was interesting. I had a piece of tape hit me in the face from the camera (that fell off) on the way down. That was not cool."

Before he walked away to present World Cup silver medals to the U.S. four-man team led by John Napier, Colbert tried to console Mesler, a huge fan who was disappointed to be the odd man out for the ride. 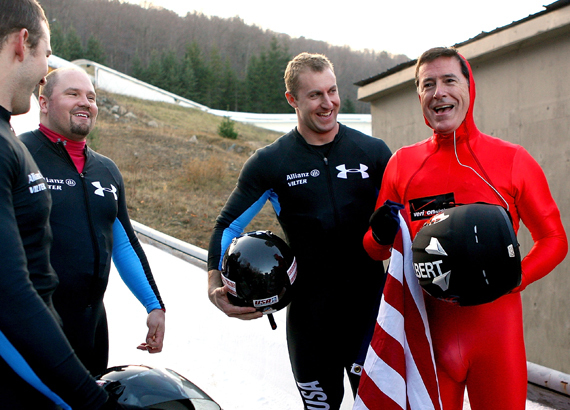 "I have some terrible news. I can't wait to go to Vancouver and be on the Olympic team," Colbert said. "It's going to be hard to tell Mesler. Is he emotionally frail? "Evidently, I am very good at having weight and allowing gravity to drive me downhill. That's all I contributed to the team. Did you hear me screaming like a little girl? I had my shoulders up around my ear canal and my head was slamming against the side of this thing. It felt like I was the Liberty Bell."

Colbert also took a skeleton ride. He said it was his favorite of the two for one reason.