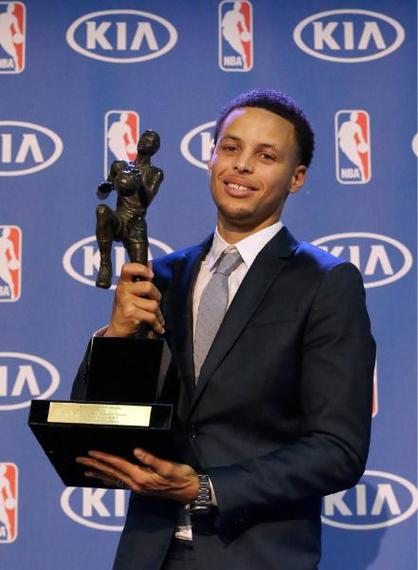 After all of his accomplishments this season, Wardell Stephen Curry was awarded the NBA's Most Valuable Player Award this week. The 6'3'' point guard had set so many goals his rookie year and had no idea that six years later he would win the honor.

Curry is the only Warriors player to share the award with the legendary Wilt Chamberlain, who won MVP with the Philadelphia Warriors in 1959-1960.

It was another fete for Golden State this season. Marking a franchise history best record, Steve Kerr was runner up for Coach of the Year and Bob Myers won Executive of the Year.

Curry accepted his award thanking everyone from his family, the team, Larry Riley (who drafted him), staff (including the team's equipment manager) and those who helped him along the way. The humble two-time NBA All-Star made sure to acknowledge those who impacted his life in his journey to success.

"This is a tremendous honor," said Curry. "My family is here to support me day in and day out. My faith is how I play the game. This has been an incredible journey and a lot has gone into it." 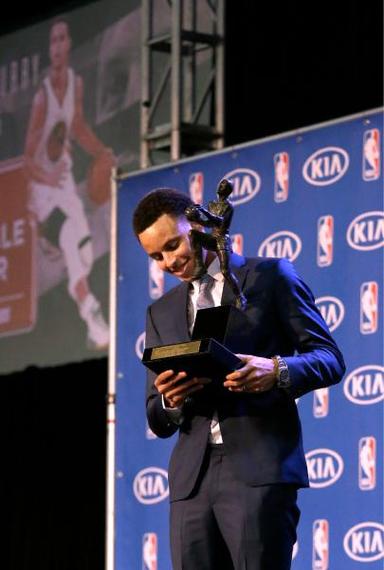 The journey wasn't as easy as recent seasons.

Curry played for three different coaches while waiting for his time to shine. The small guard developed his ball handling skills, overcame injuries and relied on his faith in God to guide him in becoming the best point guard in the NBA.

His father, former NBA player Dell Curry who paved a pathway for him, was front and center to hear his son's speech. Curry's wife, mother, grandmother, daughter and siblings were also in attendance.

Curry's words were kind and generous, thanking his father who was his role model and mentor.

"To be able to follow in your footsteps, it means a lot to me," said a choked up Curry. "This is special. I'm really proud of what you were able to do in your career and I don't take that for granted at all. Thank you so much."

Curry's generous heart continued as he donated his brand new Kia Sorrento to the East Oakland Youth Development Center (EOYDC). Curry felt the donation would be a good fit to the center that develops the social and leadership potential of youth and young adults in Oakland.