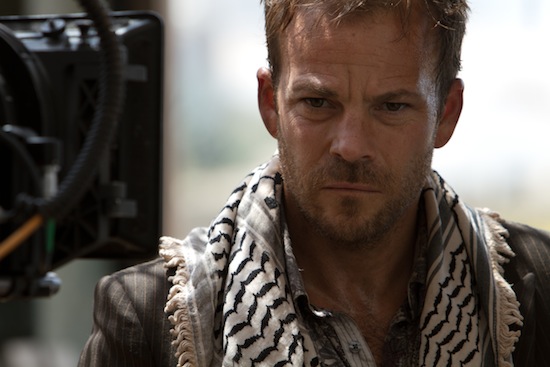 Stephen Dorff has come a long way, from his early stint as a teenage heartthrob on TV sitcoms and playing through the darker side of characters, in sometimes forgettable films.

These days Dorff is navigating us comfortably through his own intoxicating brand of understated sensuality, in roles that span from his turn as discontented superstar Johnny Marco in Sofia Coppola's touching Somewhere, to captured Israeli fighter pilot Yoni who becomes unlikely ally to a reluctant Palestinian teenager in Eran Riklis' latest masterpiece Zaytoun. He is, easily, the modern thinking woman's sex symbol.

I met up with Dorff in Toronto this past September, where Zaytoun enjoyed its world premiere at the Toronto International Film Festival. Dorff is a hot interview, sought out by everyone, yet starting with his publicist he seems to surround himself with kindness. In person, Dorff is just as charming and intense as he appears in his roles, yet with a healthy dose of down to earth and genuinely funny guy thrown in. Of course, it doesn't hurt that he's tanned, in shape and undeniably sexy.

Dorff's choice to forgo the handsome leading man roles in favor of characters chock full of emotional conflict, conscience and humanity has helped carve out a special place for him in the Hollywood firmament. While Riklis' initial feeling about Dorff was "beach boy from California" before he first decided to meet Dorff for the part of Yoni, once he "dug into him a little bit" at their meeting in NYC, the filmmaker was sure he had found his leading man. And in Zaytoun Dorff pulls off another unforgettable performance complete with impeccable Israeli accent and military demeanor worthy of the Israeli Air Force. He also, in typical Dorff style, shows us Yoni's human voyage, from defensive to vulnerable, marching him straight into his audience's hearts. It's no wonder Riklis gushed to me about Dorff in Toronto "he did a great job, it was really beautiful and I really liked his focus."

I could not talk to Dorff without mentioning Somewhere and his own statements about the film confirm its importance, in his life as well. He admits "Somewhere was not only just a film" and continues, "it was such a great role Sofia gave me, embraced me at a time when my life was changing anyway, I was growing up." It transported Dorff, and his career to "another plateau" as he aptly says.

But from Somewhere to Zaytoun, Dorff has gone through other unexpected projects like The Iceman, a film about contract killer Richard Kuklinski, in which he has a cameo role as Kuklinski's brother in "a seven-pager big scene with Michael Shannon," and The Motel Life with Emile Hirsch and Dakota Fanning, a world premiere this week at the Rome International Film Festival.

Dorff doubted himself for Zaytoun, even though when he read the script sent over by his manager he thought "this is really good!" He questioned playing an Israeli, confessing "I knew going into something like this I had to really nail it or it would be ridiculous" and thinking, "why wouldn't they hire an Israeli actor?" But he still admittedly "loved the relationship on paper" and had a bond to the character because, he says, "my dad is Jewish so I was kinda brought up half-Jewish."

Having flown in from Israel to meet Dorff, Riklis pulled out a photo of a real-life Israeli fighter pilot during their meeting, as his own weapon of persuasion. It was someone who, Dorff says, "kind of looked like me" at which point the actor exclaimed, "Jesus, but do you think I'll get the Hebrew?" The rest, as they say, is movie history.

His Zaytoun co-star Abdallah El Akal sits in the room with us during our interview and provides the perfect sidekick for Dorff, who thankfully never takes himself too seriously. When I ask them both what they learned from one another during filming, Dorff is quick to answer, "I was touched by Abe and his real family and our connection beyond the movie" and continues, "so the work in the film was strong but it was kind of effortless because we had this thing... " El Akal, whom Dorff affectionately calls "Abe" also quips in "I learned how to be a movie star from Stephen" and clearly if you are going to learn how to be one, it may as well be from fabulously humble Dorff.

I ask Dorff what profession he would have chosen had he not been an actor and he answers "something creative, like maybe music, photography, I'm definitely creative."

While his tattoos could say it all -- on his upper right arm in black ink is the famous Alice Morse Earle quote that goes "Yesterday is history, tomorrow is a mystery, today is a gift, that's why they call it the present" -- I ask him for three words that describe him. I come up with the first "Thankful," inspired by another tattoo on his forearm, then Dorff adds "curious," allowing a long time to pass before finally adding "funny, I'm always serious in movies, so people don't know I'm funny." Yet as thoughtful as he was in deciding the words that best describe him, he's quick about naming his co-star El Akal "funny, happy and kind."

I've certainly experienced my share of interesting subjects, grand personalities and wonderful encounters, but there is an added layer to Stephen Dorff -- a wonderful truthfulness and inherent kindness that, coupled with his undeniable talent, made this one of my favorite interviews. And while Dorff joked about getting older (he's only 39!) and being cast as a grandfather soon, let's hope his own touching trademark of unforgettable characters keep on entertaining and comforting us for a long time to come.