Is Stephen Hawking having trouble settling on whether we should try to make contact with extraterrestrial life?

The celebrated physicist -- whose life was the subject of the 2014 Oscar-winning movie, "The Theory of Everything" -- has long warned of the dangers of letting aliens know we're here.

In a recent interview with the Spanish news site El Pais, Hawking once again addressed the topic of why we shouldn't try to contact aliens.

"If aliens visit us, the outcome could be much like when Columbus landed in America, which didn't turn out well for the Native Americans," he said. "Such advanced aliens would perhaps become nomads, looking to conquer and colonize whatever planets they can reach."

But if Hawking, arguably the world's most famous scientist, doesn't sound like someone who wants to reach out and touch ET, he's not against the idea of trying to prove extraterrestrials are out there.

In July, Hawking joined forces with Russian tech billionaire Yuri Milner to launch a 10-year, $100-million hunt to find intelligent life outside of Earth. It's called Breakthrough Initiatives, and has two main components.

Breakthrough Listen will use two of the world's largest and most powerful telescopes to gather huge amounts of data from the nearest million stars in the Milky Way galaxy. Breakthrough Message will involve a funded international competition to collect potential messages that in the future may be beamed into the cosmos in an attempt to communicate with aliens. There isn't yet a full commitment to transmit messages to a potential alien civilization.

This raises an interesting question: Since Hawking has voiced concerns about letting ET know who and where we are, why has he aligned himself with this attempt to prove the existence of alien life -- an attempt that might result in revealing our presence to the galactic neighborhood? 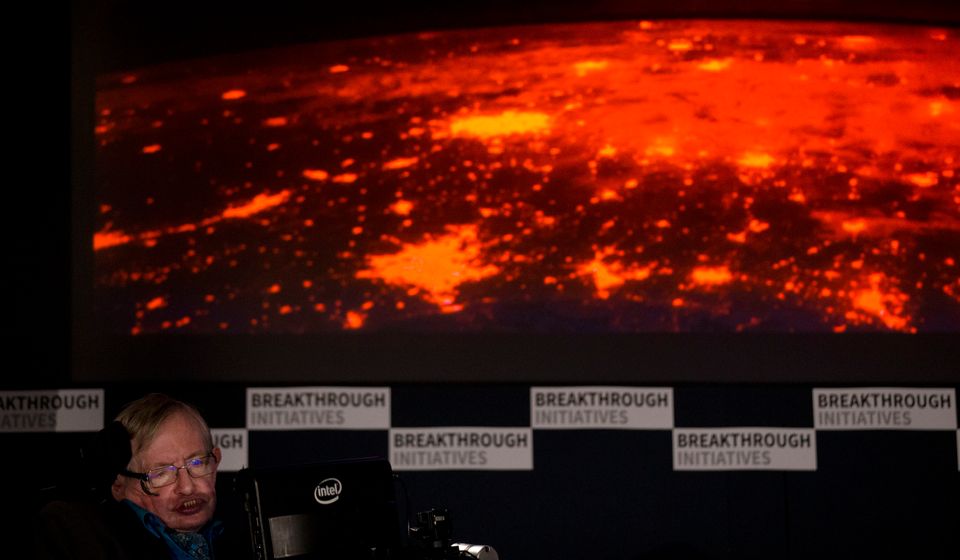 1 / 35
Britain Extraterrestrials
Renowned physicist Stephen Hawking sits in front of a presentation image during a press conference in London, Monday, July 20, 2015. Hawking and Russian tech entrepreneur Yuri Milner are pushing the search for extraterrestrial life into higher gear. The pair said Monday the $100 million "Breakthrough Initiatives" program funded by Milner will harness computer power as never before in a search of the heavens. (AP Photo/Matt Dunham)
ASSOCIATED PRESS