Many people had begun queuing up for free tickets to Hawking's 8:00 p.m lecture, titled "The Origin of the Universe," 12 hours earlier. By 6:00 p.m. local time, the line was about a quarter-mile long.

A second auditorium and a Jumbotron-equipped lawn, which itself was jammed with an estimated 1,000 viewers, were needed to handle the overflow crowd. At least one person was observed offering $1,000 for a ticket, with no success. [Big Bang to Now in 10 Easy Steps]

Stephen Hawking began the event by reciting an African creation myth, and rapidly moved on to big questions such as, Why are we here?

He noted that many people still seek a divine solution to counter the theories of curious physicists, and at one point, he quipped, “What was God doing before the divine creation? Was he preparing hell for people who asked such questions?” 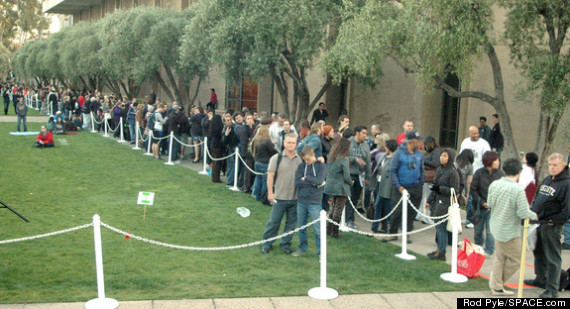 Enthusiastic attendees started lining up 12 hours early for Hawking's 8:00 p.m. lecture at Caltech on April 16, 2013. The overflow crowd stretched for more than a quarter mile.

After outlining the historical theological debate about how the universe was created, Hawking gave a quick review of more scientific cosmological explanations, including Fred Hoyle and Thomas Gold’s steady-state theory. This idea hypothesizes that there is no beginning and no end and that galaxies continue to form from spontaneously created matter.

Hawking said this theory and several other ideas don't hold up, citing recent observations by space telescopes and other instruments.

After giving a brief historical background on relativistic physics and cosmology, Hawking discussed the idea of a repeating Big Bang. He noted that in the 1980s, he and physicist Roger Penrose proved the universe could not “bounce” when it contracted, as had been theorized.

Therefore, time began at the moment of singularity, and this has likely occurred only once, Hawking said. The age of the universe — now believed to be about 13.8 billion years — fits that model, as the number and maturity of observed galaxies seem to fit in the general scheme.

In another observation of modern religion, Hawking noted that in the 1980s, around the time he released a paper discussing the moment the universe was born, Pope John Paul II admonished the scientific establishment against studying the moment of creation, as it was holy.

“I was glad not to be thrown into an inquisition,” Hawking joked.

He closed by outlining "M-theory," which is based partly on ideas put forward years ago by another famed physicist, Caltech’s Richard Feynman. Hawking sees that theory as the only big idea that really explains what he has observed.

M-theory posits that multiple universes are created out of nothing, Hawking explained, with many possible histories and many possible states of existence. In only a few of these states would life be possible, and in fewer still could something like humanity exist. Hawking mentioned that he felt fortunate to be living in this state of existence.

Hawking closed the event with a familiar plea for continued exploration of the cosmos: “We must continue to go into space for the future of humanity,” he said, adding, “I don’t think we will survive another thousand years without escaping our fragile planet.”

The physicist has been spending a month or so at Caltech, as he does each year, sequestered with colleagues, such as fellow theoretical physicist Kip Thorne, to discuss many great mysteries of the cosmos.