Over the years, I have on occasion written about Lucy Hawking, the daughter of famed theoretical physicist and cosmologist Stephen Hawking. Inevitably, people are shocked when they hear that Stephen Hawking has children. They ask. "How can that be?"

Most of us think of Hawking as paralyzed and wheelchair bound. Few know that he was once an able bodied young man. Fewer know the tragic and touching story of how this energetic young man came to be the physically handicapped super genius we know him to be today. That is, until recently. 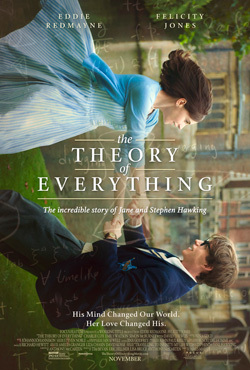 The Theory of Everything is a movie that tells this story, and it has been met with critical acclaim. In fact, it has been nominated for five Academy Awards, including Best Picture, Best Adapted Screenplay, Best Original Score, and Best Actor and Best Actress in a leading role for the actors who played Stephen Hawking and his first wife, Jane.

However, the movie would have never been made had it not been for the efforts of two of its producers, Anthony McCarten and Lisa Bruce. McCarten has had a lifelong fascination with Hawking, and became compelled to make the movie when he read Jane Hawking's memoir Travelling to Infinity: My Life with Stephen.

After writing several drafts of a script for the movie, he was introduced to Bruce, a veteran producer. Together they worked to secure the rights to the story, and with Jane and Stephen to complete a script everyone felt comfortable with. Years later, the movie was finally made.

I was able to speak with Bruce about what compelled her to make the movie, and what impact the story has had on her.

Alejandro Rojas: How many years had you and McCarten worked on getting this movie made?

Lisa Bruce: I have been involved with it about 6 and a half years now, and he had started a couple of years before that, so it is about a decade in total.

Rojas: What was your perception of Stephen Hawking when this project was first brought to you?

Bruce: I think that my perception was really like most of the general public. I really didn't know anything about his domestic life. I wasn't even really sure if he hadn't always been handicapped. I did know he was English, but when I was pitching the movie many people thought that he was American.

I really knew him and thought of him as many people do, as the Einstein of our time. I kind of thought of him as a brain in a chair, you know? I didn't really know about his personal life or all of the things he created outside of just some amazing mental discoveries.

I did not know that he fathered three children and that he had such an amazing sense of humor and optimism, or that he was given two months to live, so that was quite an eye-opener when I read the first draft. I found it to be really compelling because of that. He is sort of, to me, a kind of modern day super hero. A real life super hero because of the challenges he faced, and he just took them on. I think the thing he seems to care the least about is his disease. He seems to focus on surpassing even himself in discoveries daily.

Rojas: What compelled you to work so hard to get this movie made?

Bruce: I was really moved by it. I really knew nothing of his personal life, and I was quite moved by their love story and very moved by the strength that Jane had. It is interesting. A lot of people who have worked with Stephen and have known him for many years, even before he was as far along with the disease as he is now, feel that his optimism and the fact that he had this solid domestic life, and this support, allowed him to fly a little higher with his theories. He wasn't also searching for a home life. He had all of that.

A lot of people say this, and we feel this way too, in a way, because he had ALS, he is sort of trapped physically, so he sort of goes further with his mind than a lot of scientists say they would. They are physically able to do other things and be distracted by doing things in a regular life, whereas Stephen can't do that. So he sort of flies higher with his mental searches.

Rojas: What have you learned from Stephen and Jane's story?

Bruce: I keep learning different things. I have seen the film so many times, but my perspective on time and how to use it has greatly changed since making this movie. I think Stephen's whole thesis is about time and the abstract qualities of it, and also, simultaneously, the linear practical qualities of time. So that dichotomy, going back and forth, and thinking of what time is, and whether we can turn back the clocks, and can we go into the future, and can we go into the past, and all of that stuff is a much more prevalent thought for me than it used to be.

And the use of my time in my daily life. I feel a lot more inspired, and even pressure, to use my life in a more meaningful way. When you watch someone like Stephen, it is just an impossible life and death sentence that he was handed. Yet, he has gone and achieved things that almost all of us able bodied people couldn't even imagine doing.

And I also really think it is a story about love conquers all. I mean it really is. I don't imagine his life could have been as full or as meaningful, or continue to be so, without all of that love and support that he has. Not just from his wife, and now his ex-wife, but also his grown children.