Stephen King just said on CNN Money that books themselves aren't important since they're basically just a delivery system for a story. But they're much more than that: they're a canvas. I know. I've been painting on mine for years.

It started in college when I first bought books that weren't required reading. I'd already been highlighting textbook passages with yellow marker, and scrawling my name inside, so of course I wrote my name on the first page of these books, too. But I also put down the date of the purchase, the book store, a recent event, and who I was with at the time. 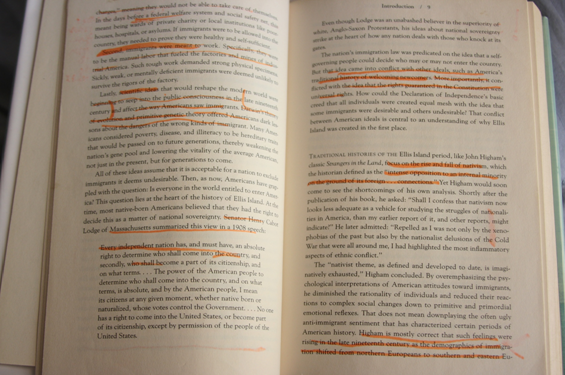 These scrawls sometimes proved amusingly opaque years later. Like: Great news on Wednesday. What about? Or: Argued with N. Who was N? And why were we arguing? Was it before I bought the book, after, was the book connected in some way? I've tried going back and comparing my journal at the time, but the cryptic notes don't open up their secret to me. But more often the inscription refers to a lunch with a lover or friend, and the scene opens up for me in a whole new way.

Having known for a long time that I wanted to be a writer, once I started buying books as a matter of course, anything I read was also a subject of study. I underlined passages, circled words I didn't know or wanted to use, bracketed or starred phrases worth remembering and quoting. Sometimes arrows would point to another page so I made sure I remembered a connection for later.

Great lines got the full treatment, and I'd note their pages in the front or back of the book, along with an identifying word or two, sometimes the whole phrase if it was memorable.

The more dedicated I became to writing as a career, the more the books I owned became a repository of ideas, notes, questions, descriptions of dreams inspired by the book, even short journal entries. It usually felt more immediate to keep the source of my inspiration and the idea closely connected. Some books have story titles, metaphors, character descriptions, opening lines written in the back or front -- and even in-between. More than a few have whole scenes worked out. 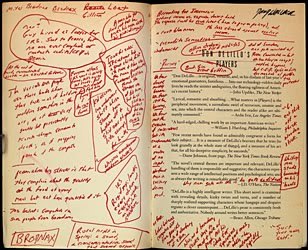 My books are also unexpected time capsules. I'm always running out of bookmarks, so many older books have had receipts, notes, to-do list and even letters tucked into them.

Once I started reviewing for The Detroit Free Press and other newspapers and magazines in the early 1990s, the intensity of my entrance into each book deepened. Though I wrote drafts on my pc, I usually started the review somewhere inside the book unless I wanted to pass it on to a friend or relative later. Then I'd have to restrain myself, keep pencils and pens away from the book at hand. It wasn't easy.

Biographies are a passion of mine, and whether I'm reviewing the book or not, they still seem to call out running commentary as I compare my life to the one I'm reading about. But I don't tend to write much snark no matter what the genre, because if a book pisses me off that much, I'm not likely to finish it. I do correct typos now and then. I can't resist. 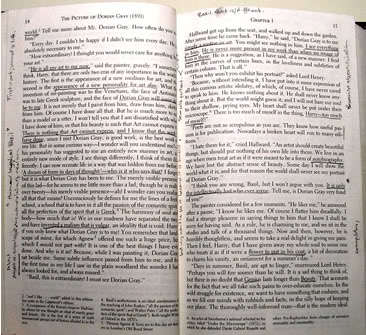 Occasionally a book feels so much like a freight train car covered with graffiti that if I want to reread it, I just buy a new copy of the book. There it is, virginal, unmarked, waiting for me to dive right/write in. But I also keep the previous copy or copies because they form a small diary of my relationship to that text. I've just started reading books on my iPad, and while I enjoy the convenience and speed of downloading, I miss the physical interaction. Every book tells its own story, but the books in my library tell my stories as well.

Lev Raphael's 25th book is a novel of suspense about police militarization: Assault With a Deadly Lie. You can check out his other books on Amazon here.