A year ago, Rep. Stephen Lynch was an ardent supporter for the Keystone XL tar sands pipeline. Now, he just seems confused.

Lynch is running against Rep. Ed Markey in the Democratic primary for John Kerry's old Senate seat in Massachusetts. With no serious Republican candidate in the race, the primary will likely determine the election. But Lynch has run into trouble over his support for the controversial Keystone XL pipeline. 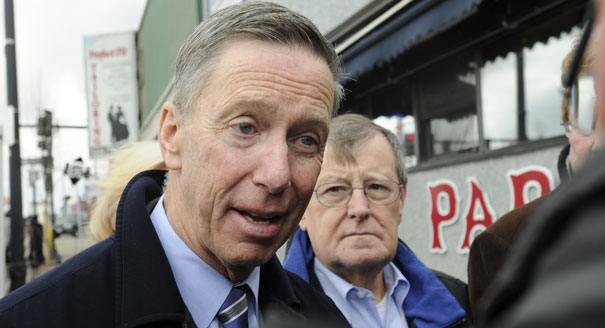 At a recent debate with Rep. Markey, Lynch was questioned by the moderator about his pipeline flip-flops:

LYNCH: Look, I'm waiting for the final environmental impact report on the Keystone project, along with the president, along with Senator Kerry. Tom Steyer is saying, "I want you to take a position before this report is out. I want it now..."

Rep. Lynch likes to make it out that he's always supported a proper review of the pipeline, but in reality, he's supported a number of measures in Congress that would have rushed approval of the Keystone XL pipeline by stripping away President Obama's authority to make a final decision on the project.

In January 2012, Lynch was interviewed by Jim Braude on NECN and offered the following unequivocal support for KXL:

LYNCH: Look, I'm for the Keystone pipeline. I think we have the technology. We've had it since the 10th century BC, to make oil go through a pipe. if the president is serious about needing enough time -- 60 days is a very short time to review a project of this size, this is a 1,700 mile pipeline.

BRAUDE: Have you conveyed to the president that you support this thing?

LYNCH: I voted for it.

BRAUDE: I mean have you spoken to him directly about this thing?

LYNCH: No, he knows I supported it though.

There are lots of reasons why Representative Lynch could have changed his mind on the Keystone XL pipeline.

Maybe he finally listened to the nation's top climate scientists who have warned Congress and President Obama that the pipeline would be an environmental disaster.

Or perhaps he's finally hearing the farmers and ranchers along the pipeline route who know the first Keystone pipeline spilled 12 times in its first year of operation and are worried about a XL spill polluting their land.

Or maybe he realized that Keystone is an export pipeline that would only create 35 permanent jobs.

Surely he's already realized that giving a XL handout to Big Oil and the Koch Brothers, who are actively working to undermine our clean energy future, isn't something Massachusetts voters would support?

Could be that he's just been watching a lot of TV and realized that supporting a dangerous tar sands pipeline in the middle of a major tar sands spill in the Mayflower, Arkansas neighborhood isn't the best "optics."

Or perhaps he's seen the organizing that's been happening all across Massachusetts. Over the last six weeks, the Vote NoKXL campaign that our 350 Action campaign has been helping coordinate has already spoken to more than 6000 students on campuses across the state -- that's more than the number that voted in the 2009 Senate primary. Meanwhile, anti-Keystone XL billionaire Tom Steyer has been running a creative campaign of stunts, culture jamming, and more to keep after Lynch on his support for the pipeline.

Whatever the reason, it's good to see Lynch backpedaling on the issue. His waffling is hopefully sending a clear message to other Democrats (like our President) that supporting the Keystone XL pipeline is bad politics: it alienates the base, it pisses off young people, and it makes you look like a Big Oil-loving Republican.