Satirical news just like this can be found every day on The Political Garage Chute.

WASHINGTON, D.C. -- Senior White House policy adviser Stephen Miller made his debut various Sunday morning talk shows this week. Miller made the rounds via satellite from the White House, but the moments leading up to the first interview were fraught with tension and anxiety, according to reports out of the Trump administration. Just seconds before the first interview started, Miller was frantic and nearly inconsolable, according to several sources leaking information out of the White House this morning. 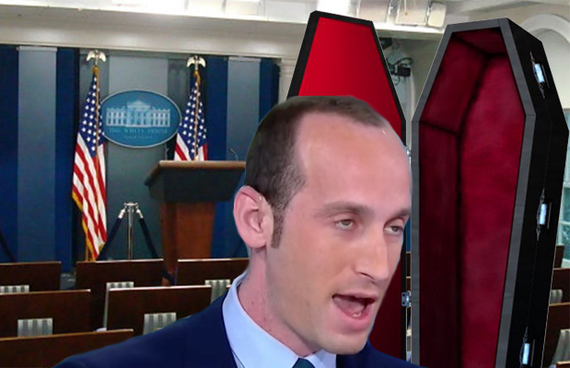 Miller barked and bellowed as White House aides attempted to shuffle his sleeping coffin -- the coffin in which he rests and regains his strength during the day -- into a place where TV cameras would not be able to see it. He was concerned that Americans wouldn't understand it, and said that since he was "already creepy as fuck enough" as he is, the fact that he sleeps in a coffin might be too off-putting to the general public.

"Those plebs, those simpletons," Miller said, "would never understand it. They'd just assume the worst. Please, move that damn coffin to another room for now, and when someone gets a chance, can I please get a drink? Geez. Who do I have to blow around here to get a nice pint of B-negative or O-positive? Jesus Christ."

Mr. Miller would later tell aides that he was feeling "a little tired and run down" and that while he believed he was right to encourage them to move his sleeping coffin as quickly as possible, he should have "had a Snickers or devoured an elderly lady's essence" and calmed down before shouting orders.

Before the interviews, aides say Miller also had them remove a few other things.

"The crucifix that Mike Pence convinced the sub-president to put in every room of the White House to show the world, symbolically, we follow Christ first," the aide told us, "had to be taken down. And the White House kitchen staff had to make sure that no garlic got within a hundred feet of the press briefing room the entire day yesterday."

Miller's performance on the shows was widely considered as hostile, combative, and he doubled-down on baseless assertions about voter fraud claims. This is Miller's highest-ranking position in his nascent political career. Previously he had worked for an eastern European company that specialized in plasma sales and distribution.