Sex, Drugs, Ratt & Roll: My Life in Rock Hits The Shelves With A Bang. (Several, Actually).

I came of age in Southern California in the middle of the 1980's Sunset Strip Hair Metal era. And what an era it was. My teenage years were spent in small clubs watching, getting to know, and obsessing over bands which, just a few years later, would go on to worldwide fame, fortune and lore. The music was awesome (well, except for Poison) and the dudes were long haired, leatherclad and fucking cool (well, except for Poison). And as far as the young me was concerned, no music was more awesome than Ratt's -- and no dude was cooler than Mr. Stephen Pearcy.

Fast forward 25 years or so and the grown-up me was tickled to learn recently that Pearcy had penned a memoir. Sex, Drugs, Ratt & Roll: My Life In Rock is out this week and is billed as "an outrageous tell-all from one of the biggest bands of the 1980's... revealing just how much a good-looking frontman with amazing hair can get away with when he's one of the biggest metal stars of all time." (Answer: A LOT). 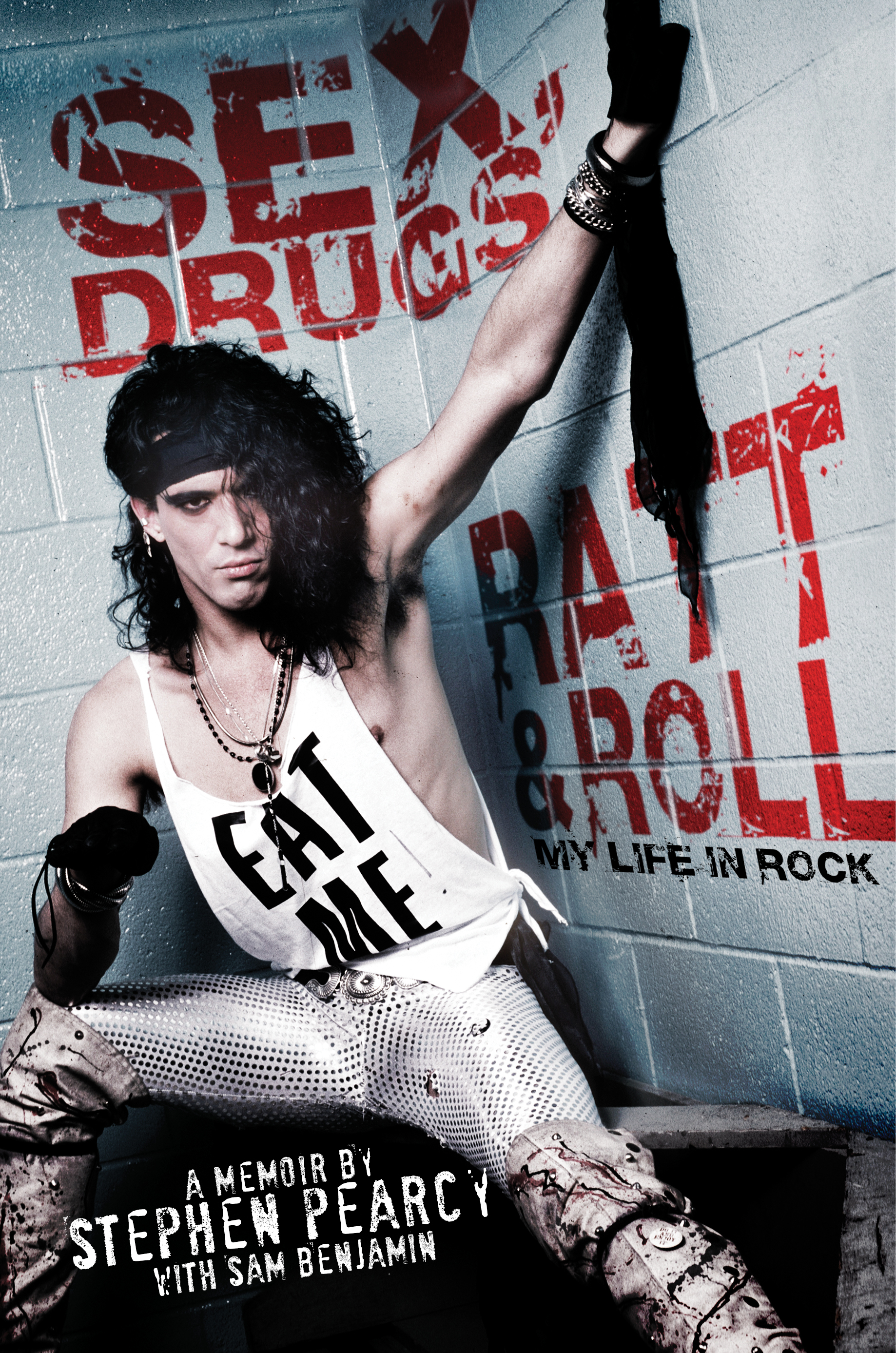 Rock memoirs are a dime-a-dozen these days, and my expectations of this one were not high. But Pearcy delivers big, and if you like the rock 'n roll debauchery kind of thing, you'll love this thing. That said, there's some truly moving and heartfelt moments throughout, particularly when it comes to Pearcy's discussion of his late 'partner in crime' RATT guitarist Robbin Crosby, his own battle with addictions, and his daughter, Jewel.

I sent him some questions after reading the book in one sitting, and I just heard back from him. So here goes:

Q: Congratulations on publication of Sex, Drugs and Ratt & Roll: My Life In Rock. How does it feel to be an author?

A: Been a long time comin'. Already up for the next book!

Q: You look great, you sound great, you're rarely off the road, and according to recent reports, RATT is headed back into the studio. Sounds like your story is still very much playing out. Why now with the book?

A: Thanks, yeah new RATT record -- hopefully it won't take 10 years. The band is ready and I'm always writing. I actually started the book 4 or 5 years ago. Seemed to be about the right time to let people know something real and honest. Past is past, time to share and shed light on some band history and the who, where and why...

Q: It is a great book. A crazy book. I'm totally tempted to make my 13 year old son read it and see how long it takes him to pick up a guitar and suddenly have an ironclad life-plan. In addition to a great memoir for the average reader, this could be like a Tony Robbins book for teenaged boys...

A: Ha! I only told a part of what could of been written or told. Might be a lesson there for the younger ones out there. I have talked about doing a seminar eventually. We'll see what happens.

Q: Also, just READING this book makes me tired of blow jobs. Maybe forever. Are those days pretty much over when you are on the road, or are you still open for business, as it were? What's changed on the road in general for you?

A: Too much of anything can become boring and useless, never tiring. The road life is pretty much the same, although you live and learn and grow out of that nonsense that doesn't make sense.

Q: I grew up hanging around the strip in the 80's (you met the dumbass, drunken teenaged me on several occasions, in fact) and your book brought back a LOT of memories. For people who weren't around, you provide an excellent history lesson of a truly important moment in time in the history of American music. Was that part of the plan? Do you think L.A. gets the respect it deserves for the metal era like, say, Seattle does for grunge?

A: My plan was to make it in music one way or another. The L.A. scene was all new, as with each decade for music, the 80's happened to be the one for RATT and our kind -- Motley Crue, WASP, etc. -- then came the copy cats, so to speak. L.A. gets respect.

Q: The reason I asked that previous question is I think that of all the bands that came out of that moment in time in L.A. -- be it Motley Crue, Poison, Guns 'n Roses, or any one of the many others, RATT is the very best example of everything about that era. The story of RATT is the story of 80's sunset strip hair metal...

A: I could agree, the later bands, GnR, Poison were after Crue, RATT and I don't see much association there.

Q: OK. The one about the candy striper and teenaged-you in the hospital. That's bullshit, right? The 15 year old in me is obsessing on that one...

A: True! Fact. I figured since I was in the hospital for so long I was going to just get away with what I could as a teen growing up. And I did.

Q: On a more serious note, you speak very warmly of the late guitarist Robbin Crosby throughout the book, but I feel like you hold back a little as his problems increase and he ultimately loses his battle with addiction. Not saying you gloss over it, but you don't dive very deep. Tough subject, I imagine?

A: Well no, I could write 10 books and not fully cover what went down. We (the band) all went thru our own trip with the partying. I didn't feel I had to make the negatives into a positive. Robbin was so important to the band, he was my right hand man starting RATT, as we knew and know it. I was on my own and his band imploded around the same time. Thats when we became partners in crime.

Q: Conversely, you're frank throughout on the difficult relationship you and drummer Bobby Blotzer have always had. How are things between the two of you today? Has he read the book? He pissed? He comes off as a huge dick, which surprised me as a fan. He kind of always seemed like the chill one...

A: We (in the band) have a saying: Bob is Bob. We are brothers, and sometimes brothers fight. He hasn't read it but I'm sure he'll have something to say. Matters not. Bobby is a great drummer, take it as you may.

Q: I was surprised to find that you are a Duran Duran fan, but looking back on how you dressed around the time of the first album in particular, I can totally see it. I love Duran, so I was bummed to read that Simon LeBon was a dick to you at Limelight. Was that as soul-crushing as it sounds?

A: I was a bigger fan of Adam and the Ants, that's where the pirate image came from. I wasn't that pissed off at LeBon, it wouldn't have bothered me if he said hello or not. We had the picture taken just to piss him off, LOL.

Q: You speak very openly about your own substance use and abuse throughout your career and ultimately your trip to rehab, but it's a little unclear as to whether or not you currently live sober. What's your lifestyle like these days?

A: Why sugar coat addiction? Someone can learn something hopefully through me talking about it. I live day to day, once an addict ,always an addict. I have to keep it together for my daughter. She's number one.

Q: One thing that really stands out in the book is that, partying etc aside, you had a killer drive and entrepreneurial spirit from a very young age. Some of your contemporaries -- including ones not particularly known for intelligence (rhymes with 'Mince Peel') -- are actually doing very well in business these days. Do you have any plans to apply your entrepreneurial skills to anything beyond your music?

A: I do and I have. Top Fuel Records, my indie label since 1995. I'm always working with bands. I've recently created "Mic Knuckles" a new line of microphone holder, I have a TV production team and we are creating programs, reality shows. My partner and I are always working sponsorship deals, cross marketing for drag racing. I'm always creating something.

Q: I mentioned earlier that rumor has it RATT are headed back to the studio. And for the first time in a long time, the original surviving lineup are all on board, correct? How are you feeling about it and what do you hope to accomplish this time around?

A: Yes, we have Juan (Croucier, original bassist) back in the band and the four original members should be in the studio by late summer. I'm hoping for a 2013 release for a new RATT record. You never know, like I said the last record took 10 years to get done. Again, I'm always writing and recording. Warren has played me music that is so good, I'm very excited to get some new RATT music out there. This next record could be the last, so we'll make sure it's the best yet. It's only Ratt n' Roll!