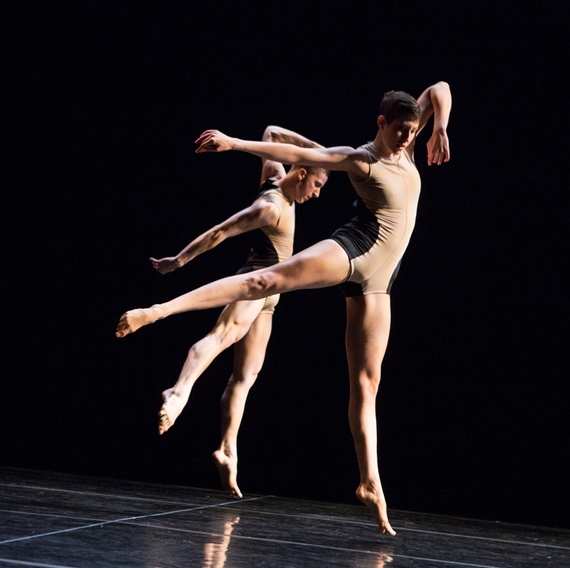 "Am I going to be that one trick pony who's fast and sexy his whole life?" Stephen Petronio asked with urgency that humorously juxtaposed the allure of his question. Indeed, most of us would love to be fast and sexy our whole lives, no matter how many tricks and ponies it took. But for Petronio, classification is a vice that leads to boredom, and once he gets thrust into a role, he's eager to rebel.

However, as a choreographer, Petronio is celebrated for his speed and dynamism. He's a descendent of postmodernism, "the bastard child of Trisha Brown and Steve Paxton," he joked. He's also the product of a collection of New York City memories thrown together over decades of rushing around the five boroughs.

"I've very much absorbed the restlessness of the city, and it's definitely in my work. The desire for everything -- I'm never sure what side of the street to walk on because I don't want to miss anything," he explained.

Given Petronio's NYC connection, it's no surprise that his company will perform at the Joyce Theater this week. There's no other venue that so aptly captures the haunting enthusiasm and open intimacy that the city harbors, all of which is reflected in Petronio's repertoire. And, for personal reasons, Petronio returns to the Joyce nearly every year, because after 17 seasons, it's like his home.

"I've grown up on that stage," he said. He has, and he earned his rite of passage when he was designated the Joyce's first Artist-in-Residence. With maturity came an obligation to thank those who had raised him within the dance world, and so for his company's 30th anniversary last year, he introduced a project called Bloodlines.

Petronio has a tendency for turning things on their heads, and Bloodlines is no different. As an audience, we're used to seeing advertisements for older, established companies bringing in new names to keep their reputation as a fresh, ever-innovative force. For example, New York City Ballet never fails to emphasize its slew of 21st-century choreographers, and Martha Graham Dance Company has rebranded itself as a place to showcase modern dancers in pieces by Nacho Duato and Kyle Abraham. Petronio is doing the opposite. He's the fresh, ever-innovative force in his company, always churning out a premiere or two. But he believes in preserving what came before him, and Bloodlines is an attempt to construct and honor the postmodern dance timeline.

"I just thought that I wanted to curate my corner of history -- where I come from and what inspired me," he said. "Stephen Petronio just didn't end up here. I didn't just drop down from heaven. I came from somewhere. And my ability to do what I do comes from a lot of the rules that Merce... and then that postmodern generation after him broke."

As Petronio devised how Bloodlines would burrow its way into his New York season, he decided to first confront Cunningham, whom he cited as "the beginning of all rule-breaking." Out of Cunningham's collective oeuvre, he chose RainForest for its '60s bent, before Merce's technique became so strictly delineated. Andy Warhol's set with its whimsical silver pillows was also a draw, as Petronio tends to mix the larger art universe with dance so that performance is a constant collaboration between mediums.

Along with RainForest, Petronio plans to explore Trisha Brown, Lucinda Childs, and Yvonne Rainer among others in the years to come, nurturing a genealogical tree for the postmodern community. He's a family man, after all, and he wants to pay homage to his lineage.

Petronio's familial tendencies were also what inspired him to put together his own troupe back in 1984 while he was still dancing for Trisha Brown. "I have a very high sense of responsibility, and I knew that if I formed a company that expected me to show up, I would show up, and I would be very productive if I had a system that would allow me to be productive," he said.

The '80s were a decade of frenzy and fun, Madonna and Michael Jackson. Girls in neon clapped along to a DJ's playlist of one-hit wonders until 6 a.m. But beneath the vivacity was an undercurrent of adjustment -- social, psychological, technological. Reaganism pushed against the liberal politics of civil rights movements, the Stonewall riots, and second-wave feminism. Post-Vietnam sentiment cast a shadow on the American identity. Television and the Internet were finally being developed and disseminated for mass consumption. As a gay man keen on how technology would change art, Petronio set works for his company that commented on this changing era, when the United States was on the brink of a sexual revolution.

"For me, gender is very fluid, and it needs to be onstage so that there's a visual for that fluidity," Petronio explained. "How could I possibly make exclusively male-female pas de deux without making male-male ones and go to sleep at night and live with myself?" 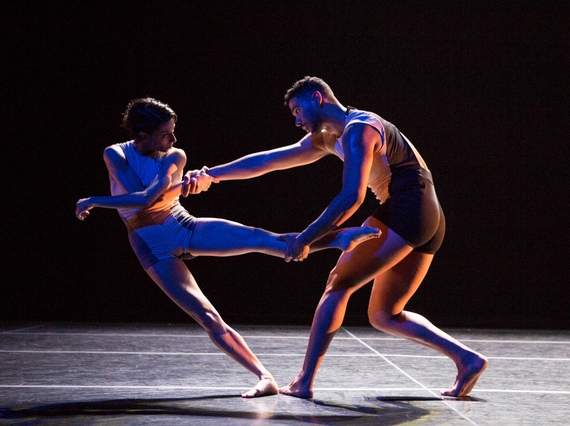 Thus, Petronio's repertory became a commentary on gender and sexuality -- how in physics we're all equal in strength, and how no heteronormative construct could define human interaction. Some appreciated his novel point of view, others pushed against it. Petronio didn't really notice the latter group.

"I've been blessed with a clueless sense that if I'm doing it, you're going to accept it and agree with it, and that's why I make the kind of dances that I make," he laughed.

But identity shouldn't be taboo. It's an extension of self, so why was it incendiary? Soon, Petronio grew tired of his image as New York's gay choreographer and moved on to search for the polemical in form. Again, categorization has never been part of his game. He's much too nuanced to be boxed in on an Excel spreadsheet.

"I have to live with this stuff everyday. You see it once or twice, but for me, I have to stay interested in the evolution of where it's going," Petronio said.

Locomotor/ Non Locomotor, Petronio's newest pieces showcased in his New York season, are certainly evolutionary from his early career. A dive into time and space, they have finesse, subtlety, and moments of suspension. The movement boasts intentionality; it's not aimless experimentation. Petronio recently published a memoir, Confessions of a Motion Addict, and the exercise of writing taught him how to privilege substance over abstraction.

"Creating meaning in words has just made me more aware of what the cadence of that meaning is and how it results in meaning as opposed to how it results in experimenting," he explained. "So I'm less satisfied with just opening an experimentation right now because paragraphs mean something."

Still, Petronio is that pony who's fast and sexy his whole life, even if he's got a few more tricks up his sleeve. That's just his personality. He's the boy who grew up reading books and watching television, who took his first improvisation class because a pretty girl asked him if he would. He's the pre-med student who's obsessed with anatomy and physics. He's the ACT UP advocate and the choreographer who explores form. In sum, he's a man who loves to be on his toes.

"I'm a guy from lower-middle-class New Jersey who knew nothing about art, and art totally changed my life," he said. "And movement--I mean, something that is so hard, and so painful, and pays so little has made me so happy."

Stephen Petronio Company will perform at the Joyce Theater April 7-12, 2015.