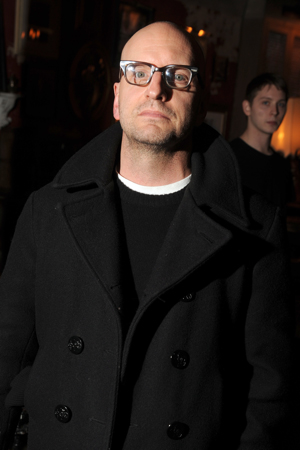 "I never, ever thought in a million years that I would be standing here for this role, in this film," Rachel Weisz said upon accepting the New York Film Critics Circle best-actress award for her performance in The Deep Blue Sea. "'So blow me down with a feather,' as I said to my English husband over a cup of tea and a digestive biscuit," she added, to much laughter from the crowd at the ceremony on Monday.

Weisz's English husband, Daniel Craig, was at her table, but we didn't spot any teacups.

Best actor was Daniel Day-Lewis, and Steven Spielberg told of his years-long battle to get Lincoln into production, reading to the audience multiple letters from Day-Lewis critiquing various versions of the screenplay and politely declining the role. After a complete script rewrite in 2004, Day-Lewis wrote: "Steven, if ever you're in town and feel like anything from a coffee to dry martinis, give me a call. I enjoy your company." That was when Spielberg brought Tony Kushner onboard.

"Well, if you didn't know what a fucking idiot I was before, you know now," Day-Lewis joked about turning down the role several times. "I do say yes from time to time," he told the audience. "Sixteen years ago I said yes to [wife] Rebecca," he said laughing. "That was the best yes I ever said," he added, eliciting a chorus of "aw"s. The actor thanked others, including co-star Sally Field, named best supporting actress, and said he was thrilled to have met Amour's Emmanuelle Riva, who gave a delightful speech--in French, via a translator--when accepting the award for best foreign film.

Spielberg told VF Daily that he is happy with Lincoln's reception from both critics and audiences. "I'm grateful for the good reception it's gotten, and I'm happily surprised at the amazing box office so far in America," he said.

Nowadays, Spielberg reads all of his films' reviews, but that wasn't the case earlier in his career. "I was more vulnerable as a younger director, and I'm less vulnerable right now," Spielberg explained to VF Daily. "And I just know that criticism is an art form, the same way movies are, and often brilliant writers are writing reviews of plays and books and movies, and I respect good writing, and I respect intelligent analysis. And so I'm interested in what people think about my movies."

Matthew McConaughey was named best supporting actor for his roles in both Bernie and Magic Mike, and Mike director Steven Soderbergh presented his award. "While we were shooting Matthew's script sequence, one very impassioned woman extra pulled his G-string off and tried to stick her finger up his butt," Soderbergh said. "And when I remembered that, I thought, You know, where I come from, you stand up for a guy who brings that kind of game to your movie."

"I don't think she was trying to stick her finger up my butt," McConaughey countered when he took the stage. "She was trying to put it somewhere, though, and you got it on film. It worked out." In his funny, sincere (kinda long) speech, McConaughey thanked both directors and various mentors and praised his wife, Camila Alves, for putting up with his immersing himself in roles. "I've got a great wife and a great family," he said. "And what I mean by that is I've got a woman that lets me go and pop in that bubble with blinders on, and I don't have to feel like I've got to look over my shoulder, because I know the homestead is taken care of. And I even get quite inconsiderate, with reality as a whole, and she forgives me for that," he continued. "That's a great place to be, as an actor, to be able to go create and have that support. When you come home and think you may have a few demerits, and they say, 'No, you've got credit.'"

When VF Daily caught up with McConaughey later in the evening, we couldn't help but wonder: how was it that after doing the dark comedy Bernie, McConaughey didn't recommend that movie's star, Jack Black, for a role in male-stripper story Magic Mike? "He should have been a character in Magic Mike, huh," McConaughey said. "Yeah. Especially in that shot when he walks away to the jail cell at the end, with his pants hiked up high in the back," he added, laughing. There's always Magic Mike 2. "He still has a chance," McConaughey said.